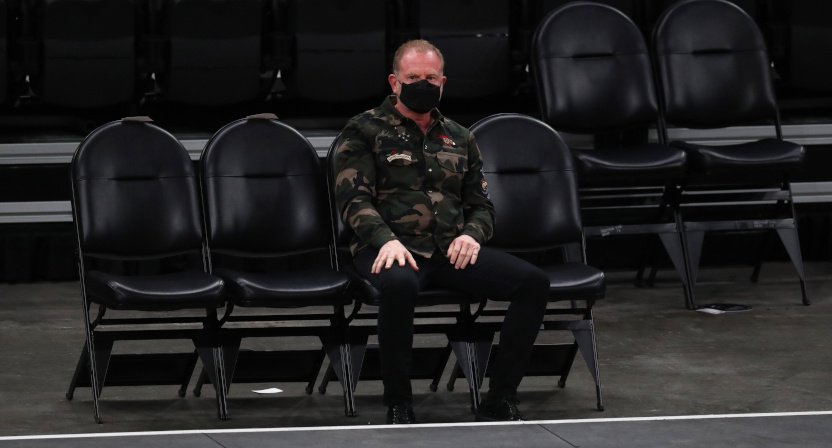 Back on October 22, the Phoenix Suns took an unusual action, putting out a series of preemptive denials of a then-unpublished ESPN investigation into Suns’ owner Robert Sarver. That investigation, by ESPN’s Baxter Holmes, was published Thursday (almost two weeks after those initial denials). It contains many accounts of awful racist and sexist comments from Sarver (and also significant racist and sexist comments and actions from others in the organization), but also continued (and sometimes specific) denials from Sarver (seen above at a March 4 game) and the organization that much of what’s reported here happened. And it’s uncommon in that regard.

There have been numerous in-depth investigations of racist and sexist behavior from organizations and specific personnel over the past few years. Those have often led to specific firings of particular people. It’s more unusual to see that lead to an owner being forced out, but that has happened, including in the NBA with Donald Sterling, in MLS and the NWSL with Dell Loy Hansen, and in the NWSL with Steve Baldwin. So there are potentially high stakes here for Sarver. And his response has been a. to dispute this story before its publication, and b. to continue to dispute that many of the key accusations in it ever happened. Here’s one example from perhaps the most inflammatory part of the piece (and one with an on-the-record accusation rather than an anonymous one), former head coach Earl Watson’s claims about Sarver using the N-word after an Oct. 30, 2016 game.

“You know, why does Draymond Green get to run up the court and say [N-word],” Sarver, who is white, allegedly said, repeating the N-word several times in a row.

“You can’t say that,” Watson, who is Black and Hispanic, told Sarver.

…Sarver did acknowledge using the word once many years ago. “On one occasion a player used the N-word to describe the importance of having each others’ back,” Sarver said through his attorneys. “I responded by saying, ‘I wouldn’t say n—a, I would say that we’re in the foxhole together.’ An assistant coach approached me a short time after and told me that I shouldn’t say the word, even if I were quoting someone else. I immediately apologized and haven’t said it ever again. The N-word has never been a part of my vocabulary.”

In the case of the Oct. 30, 2016, game versus the Warriors, Sarver and his lawyers wrote that Sarver did not have that conversation with Watson but had one with a Suns player who had received a technical foul for what they said was using the N-word during the game. Sarver said he encouraged the player to appeal the technical foul because Green had used the word in the game — the technical foul was later rescinded by the league.

Sarver denied Watson’s characterization of the incident: “This is absolutely untrue. I remember the game and topic clearly. I of course never used the word myself. During this conversation, I said ‘N-word’ without saying the full word. The word itself never crossed my lips.

“Let me be crystal clear: I never once suggested on that night (or ever) that I should be able to say the N-word because a player or a Black person uses it.”

Much of the piece is like that, with claims of racist or sexist behavior from Sarver (usually anonymously, including one further specific accusation of n-word usage in 2013) and then Sarver issuing statements to try to refute them. And part of what’s unusual here is that many of Sarver’s statements are not what we usually see, such as attempts to recontextualize comments. They’re flat-out denials that he made those comments.

And that goes beyond the N-word accusations. It includes comments about condoms (four former employees said Sarver would brag about his sex life and wearing Magnum condoms in staff meetings, Sarver said he didn’t talk about his sex life and “absolutely not” about condoms), crying employees (two former employees said Sarver berated a female employee, she broke down, and he said “Why do all you women around here cry so much?”, while he said he didn’t “remember a single instance that an employee ever cried in front of me”), comments about the Suns needing to have local strippers impregnated by NBA players to get them to come to or stay in Phoenix (“I never said anything like that. Period.”) and more.

The denials go beyond Sarver specifically, too. The piece includes a discussion of a female employee going to HR after a female coworker was physically assaulted by a male coworker outside the office, with those two women telling ESPN there was no investigation and the male coworker only had his desk moved slightly, but the Suns saying they could  “take no action because both employees declined to speak with HR and because neither employee expressed an interest in having the Suns intervene concerning the dispute” and denying ever instructing “either employee to ‘move [their] desk’ to resolve the domestic issue they were having.” And the many other accusations of racist and sexist behavior in the organization tend to come with similar denials.

The end result is that we’re left with two starkly different accounts of the same situation. On the one side, there’s an ESPN report based on interviews with more than 70 current and past employees, but with many of them speaking anonymously. On the other side, there’s the Suns and Sarver fervently denying that many of the most inflammatory parts of that piece ever happened. Without audio or video recordings, there isn’t evidence beyond the testimonies on both sides.

The ESPN side certainly seems stronger. It’s difficult to believe that that many people would fabricate stories (and that those stories would hold up under cross-checking; it’s notable that most of the significant claims here are supported by multiple anonymous sources, not just one). It’s also difficult to believe that ESPN would publish this if they weren’t highly confident in it, especially given the legal threats from Sarver and the Suns. But the preemptive, continued, and high-scale denials from Sarver and the Suns do raise some uncertainty.

It should be noted that plenty of initial fervent denials are later contradicted by a mountain of evidence, with a recent example being the Chicago Blackhawks/NHL situation. And that situation made those initial denials from the team and the league look awful in retrospect, and that may wind up being the case here. But that situation also illustrated the importance of a full outside investigation in actually effecting change; the media reports kicked that off and led to that investigation, but the actual change came from that investigation (and from its results being made available to the public). And it seems likely that may be what’s needed here. In fact, Suns’ vice-chairman Jahm Nafaji has already issued a statement saying he’ll support an investigation if the NBA launches one:

Full statement, including a pledge from Najafi to ensure full accountability in a potential NBA investigation: pic.twitter.com/txkscU6Xw4

There’s certainly enough in that ESPN report to support an investigation, despite the Suns’ denials. We’ll see if the league launches one.

Update:  Marc Stein later reported that “The NBA is expected to soon launch an investigation into the allegations reported today,” and included a statement from Sarver with further denials, and one saying he’d “entirely welcome an impartial NBA investigation.”

The NBA is expected to soon launch an investigation into the allegations reported today by ESPN’s @baxter Holmes against Suns majority owner Robert Sarver … and Sarver just issued a statement in response that closes by essentially acknowledging an investigation is forthcoming: pic.twitter.com/xJswSUl3vR

And Suns’ president and CEO Jason Rowley released this statement:

The Suns also released this statement from president and CEO Jason Rowley on behalf of Suns Legacy Partners LLC: pic.twitter.com/fPENiigKE9

And the league is now investigating:

The NBA is investigating allegations regarding Suns owner Robert Sarver, based on today's ESPN story: pic.twitter.com/WpGkQhLcst

Meanwhile, Watson, now an assistant coach with the Raptors, delivered this statement: