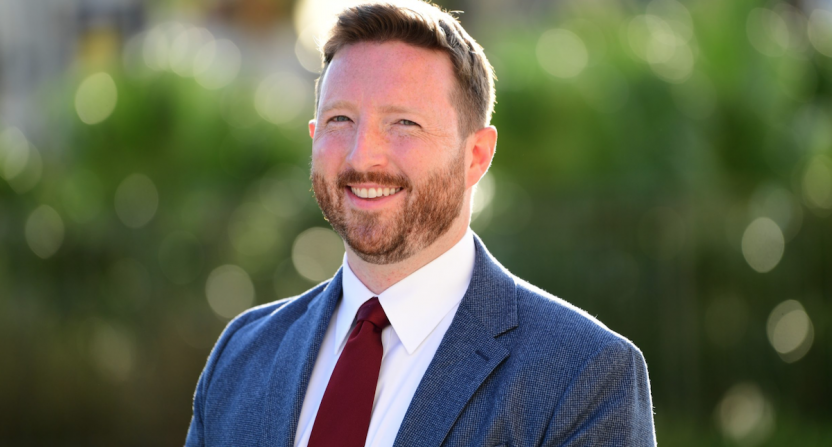 ESPN is staying in the Dave McMenamin business, which means the veteran NBA reporter will remain in the business of covering the Los Angeles Lakers for the network across its TV and digital platforms.

The network announced on Wednesday that McMenamin has signed a multi-year extension, continuing a professional relationship that began in 2009. The Syracuse grad first covered the Lakers when he joined the network after a stint for NBA.com during which he collaborated with Washington Wizards star Gilbert Arenas on a popular blog.

McMenamin chronicled championship teams during his first run on the Lakers beat, but was also on hand for the team’s decline under coaches Mike Brown and Mike D’Antoni. Then he had the opportunity to cover LeBron James upon his return to the Cleveland Cavaliers and ended up following another championship season.

“I truly believed at the time that I would go to Cleveland to cover LeBron James winning a championship for the city of Cleveland and break the curse,” McMenamin told Awful Announcing in 2019. “I just believed it would happen.”

? Dave will continue to report on the Los Angeles Lakers across multiple @ESPN platforms pic.twitter.com/uRdNnVY15R

Being on-hand for the Cavs’ 2016 championship also resulted in McMenamin co-writing a book about that season, Return of the King: LeBron James, the Cleveland Cavaliers and the Greatest Comeback in NBA History. He partnered with ESPN colleague Brian Windhorst, who also established his reporting career covering LeBron James.

McMenamin returned to Los Angeles and the Lakers beat, following LeBron joining the team as a free agent for the 2018-19 season. He covered yet another championship team when the Lakers won the 2020 NBA title to finish off the restarted 2019-20 campaign in the Orlando Bubble.

Any team with LeBron (and Anthony Davis) has championship aspirations, so the Lakers have their sights on another title for the 2021-22 campaign. Making this season’s squad more intriguing are the offseason additions of Russell Westbrook and James’s fellow 2003 draftee Carmelo Anthony, along with Rajon Rondo, Dwight Howard, Trevor Ariza, and DeAndre Jordan.

Related: The Lakers’ flashiest new acquisition — Russell Westbrook — is under the most pressure

That’s led to many jokes about the age of this Lakers team, but the roster has built plenty of depth with Wayne Ellington, Malik Monk, and Kendrick Nunn joining the team to surround LeBron with capable outside shooters.

All of those new faces could create plenty of new stories on which McMenamin could report. And if the Lakers celebrate with the Larry O’Brien trophy next June, maybe he’ll have another book to write.