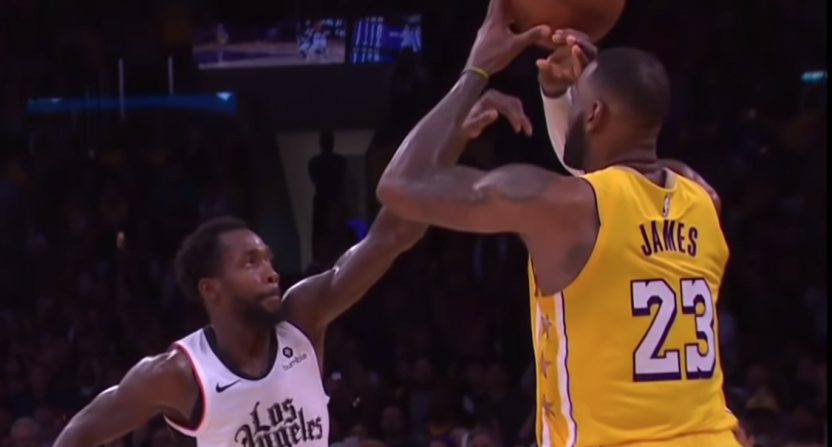 We all make mistakes. It happens to the best of us. (Awful Announcing readers and commenters are always quick to point out any typo we commit. And we love you for that.)

But those errors — a missed shot, a bad pass, a poor call — can be glaring in big moments when the spotlight is at its most intense. ESPN NBA play-by-play man Mike Breen has called hundreds of games in nearly 30 years at the mic. He’s likely watched more basketball than many of us.

Yet the action can move so fast with rules that can sometimes be confusing enough that the wrong call is made on a broadcast. Even with the benefit of super slow-motion replay. Announcers are calling what they see, often going with the thought that immediately comes to mind. However, it’s not always the right call.

Such a moment happened Wednesday night at the end of the marquee Christmas matchup between the Los Angeles Clippers and Los Angeles Lakers. The game was eagerly anticipated, not just an intra-city showdown, but a potential preview of the NBA Western Conference Finals. And the contest came down to a pivotal play with 3.6 seconds remaining.

Patrick Beverly with the block on Lebron pic.twitter.com/8Jfk3MoQnB

LeBron James attempted a three-pointer to tie the score at 109, but the Clippers’ Patrick Beverley tipped the ball as James rose for the shot. The ball went out of bounds and the question was whether or not possession belonged to the Lakers, meaning they’d get another attempt to tie the score, or the Clippers, which would effectively end the game.

The reflex reaction was to assume that it was Lakers ball because Beverley blocked it out of bounds, right? But replay — especially in super slo-mo, showed that Beverley tipped the ball, but LeBron still went up for the shot. So when the ball went out of bounds, James was the last one to touch it. Clippers ball!

However, while calling the replay, Breen argued that Beverley caused the ball to go out of bounds, so the Lakers maintained possession. That compelled viewers to say, “Wha… ?”

What is Breen talking about there, ha? He didn't think it mattered who touched it last?

Mike Breen really thought it was who caused the ball to go out of bounds and not who it went out of bounds off? That may me the dumbest thing I’ve ever heard. First game Mike?

Did anyone catch Mike Breen actually suggest the call is based on “whoever causes the ball to go out of bounds”?! Steve Javie has to correct him “um no it’s whoever touches it last”. Wow!

Replay clearly showed that LeBron’s fingers were the last to touch the ball, so it was a curious call from Breen. Again, the reflex assumption would be that the player who blocked the ball made it go out of bounds. And that’s what the referees initially called. You can see the official point at the Lakers’ basket. Had replay not been available, that would’ve been the ruling.

But this was more of a tip — or swipe — than an outright block. And replay corrected the call, showing that LeBron touched the ball after Beverley jostled it from his grasp. That’s exactly why sports leagues use video replay, to catch what the regular eye might miss amid the quick action.

It was simply the wrong call. Was it the dumbest call ever made? Of course not. Textbook Twitter hyperbole. But Breen did appear to be unclear on the rules, which is surprising — and likely a bit embarrassing — for a veteran broadcaster who’s called so many NBA games in big settings.

Regardless, Patrick Beverley made an outstanding defensive play, something he’s become known for during his eight-year NBA career. Stops like that are one reason why the Clippers are viewed as a favorite to win the NBA championship. Maybe LeBron will get the edge in a future meeting. And hopefully, Breen gets a chance to call another climactic matchup between the two, ideally with a conference title on the line.