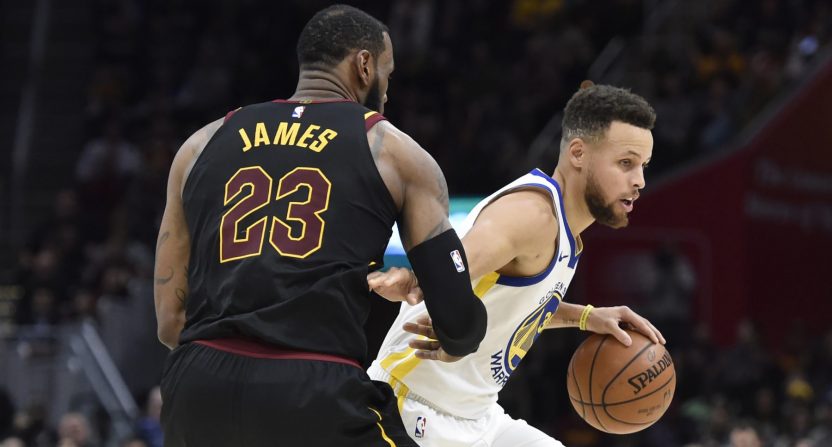 ESPN’s Eastern Conference Finals broadcasts haven’t had much going for them on the court. LeBron is LeBron, of course, but through four games, there hasn’t really been a close contest. Toss in a Celtics team missing two stars, and it would seem like a recipe for middling ratings at best.

But that hasn’t been the case! Last night’s blowout Cavs win was ESPN’s highest-rated Conference Finals game in six years, according to their release:

Those are definitely good numbers, but why are people tuning in? A common thread lately in the NBA analysis world has been questioning whether the sport can remain popular despite having landed in an era where blowouts are common, even between two good teams. But the ratings haven’t dimmed despite that, as Yahoo’s Dan Wetzel pointed out:

Cleveland’s nine-point victory Monday represents the closest in terms of margin of victory this round in either conference (the first three in the East were decided by 25, 13 and 30). The average margin of victory for both series is still a whopping 21.9.

In truth, it was only this close because Cleveland dribbled out the clock at the end and Boston scored on an uncontested dunk. The game was truly over with a couple minutes left, but it was worse than that. Thanks to a big first quarter, Cleveland led by at least seven points for the final 39:27 of the game.

It was just another blowout in a round of playoffs in which that’s become the norm. Last year, it should be noted, was similar.

Yet each morning executives at the NBA, ESPN and TNT awake to ratings that, by most measurements, keep going up and up. Game 1 in the West was the highest rated ever. Social media engagement keeps setting records also. The league is rolling, especially among coveted younger fans, and the fact that no one can manage a close game hardly seems to matter. It stands to reason the West’s Game 4 will follow the trend.

The logical reason for this (and the one Wetzel reached as well) is that NBA fans aren’t tuning in to watch close, competitive basketball, although obviously that’s still a desirable outcome. They’re tuning in to see LeBron James, Steph Curry, James Harden and Kevin Durant do ridiculously awesome things on the basketball court. When you have a star-driven league, this is the logical endgame.

It’s also worth noting that just because a final margin is 15 points, it doesn’t mean the game wasn’t close. If either Houston or Golden State has a 15 point lead early tonight, for example, that’s not close to comfortable, because either team is capable of erasing that deficit in minutes. We have to adjust our expectations for what a blowout is when Curry or Harden or LeBron is capable of going on a one-man 12-0 run at any given time.

That sense of “Anything could still happen!” combined with legitimate superstar talent remaining in both conferences can only help keep people tuned in for games they might otherwise give up on.

Whether it’s a formula for long-term, sustained success remains to be seen, but for now the NBA really does feel like a sure-thing, ratings-wise.