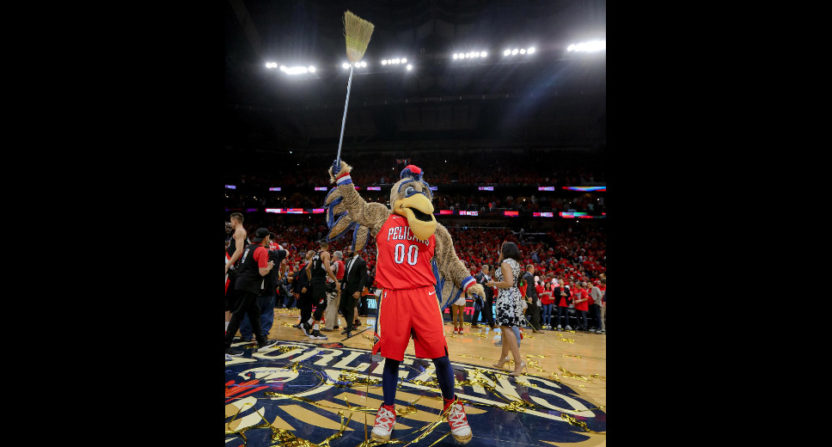 Before many playoff series, ESPN tends to post graphics with their reporters, columnists and analysts from a given sport making their predictions for the series. Those predictions sometimes get awfully groupthinky, though, and that can lead to some pretty funny callouts from the team picked against if they just so happen to win. And that’s what happened Saturday from the New Orleans Pelicans in the latest example of this trend. This year, every ESPN NBA personality surveyed (22 in all) picked the third-seeded Portland Trail Blazers over the sixth-seeded New Orleans Pelicans in the first round, and boy, did the Pelicans have those receipts ready after they finished off their sweep of the Blazers with a 131-123 win Saturday:

All 22 @ESPN NBA analysts picked the #Pelicans to lose the series.

That’s pretty funny. And it’s not the first time this has happened. Last year, every ESPN hockey personality surveyed (12 in all) picked the first-seeded Chicago Blackhawks over the eighth-seeded Nashville Predators in the first round, and the Predators’ team Twitter account and their mascot’s account both made fun of the network after sweeping the Blackhawks. They’d go on to make a run to the Stanley Cup Final; we’ll see if the Pelicans can repeat that kind of “nobody believed in us!” success.

It’s cool that ESPN’s personalities feel bold enough to make public predictions, and it’s great that the network puts them all in one place so people can check on them. But yeah, when the disrespected team not only pulls off the win, but does so in a sweep (the first one by a six-seed or lower since the NBA playoffs’ first round expanded to a best-of-seven format in 2003, and the Pelicans’ first win since the 2007-08 season when they were still called the Hornets), they’re definitely going to hear about it.