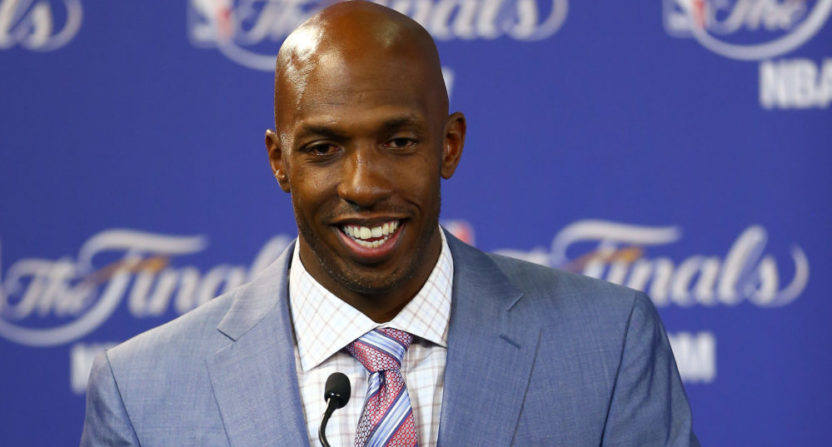 We’ve already seen one former All-Star point guard take a head coaching job this offseason, with Steve Nash joining the Brooklyn Nets. Now we could see another, as Chauncey Billups is reportedly a serious candidate for the Indiana Pacers.

That’s according to Billups’ ESPN colleague Adrian Wojnarowski, who reported last night that the Pistons hero is going to be considered in Indiana, and perhaps could also join Ty Lue as an assistant if Lue takes a job this offseason.

As the Pacers begin preliminary interviews with a number of candidates, Billups and team officials have recently engaged and are planning to talk further about the job, sources said Wednesday.

Clippers assistant Ty Lue has discussed with Billups the possibility of him joining Lue as his top assistant coach should he land a head-coaching job this offseason, sources said. But the Pacers present a unique opportunity for Billups, given that it’s not a job — unlike Philadelphia and New Orleans — for which Lue looms as a candidate.

Billups has no formal NBA coaching experience, but he does work with NBA players in the offseason and has certainly never left the world of the NBA. He’s done lots of national work with ESPN, and has also worked as a game analyst for the Los Angeles Clippers. In 2017, he was a serious candidate to become the next GM of the Cleveland Cavaliers, though he withdrew his name from consideration after the Cavs reportedly offered him below market value. (Then LeBron left in 2018, so it was probably the right choice regardless.)

As Woj notes, players like Kyle Lowry and Marcus Smart have credited Billups for steps forward in their career, and Billups also has connections with key Pacers, including Victor Oladipo and Malcolm Brogdon.

Billups himself has served as something of a finishing school for several top NBA guards in recent years, including two in the Eastern Conference semifinals — Toronto’s Kyle Lowry and Boston’s Marcus Smart — who each credit time spent with Billups as invaluable in their career growth and evolution.

The Brooklyn Nets hired Steve Nash — a contemporary of Billups — without pro coaching experience, but he did have the benefit of a long-standing relationship with Nets GM Sean Marks. Billups has built relationships with the Pacers backcourt of Victor Oladipo and Malcolm Brogdon in recent years, but they’re not running the Pacers’ search.

Billups certainly fits the profile of someone who could “skip the line”, as Nash put it, jumping into a coaching position without having worked years as an assistant. The Pacers would likely be a solid fit for him; they’re unlikely to bottom out or go full rebuild anytime soon, but as a smaller media market there would be less pressure and day-to-day scrutiny involved, which could let Billups focus more on the actual coaching side. It’s also a coaching challenge, though; Indiana is never a destination for free agents, and a team like that depends on the coach to extract a lot out of the roster to help make up for that lack of superstar talent, especially in the postseason.

Of course, the Pacers have to actually hire him, too. They’re reportedly casting a wider net, including Becky Hammon, another 43-year-old former point guard with a very impressive playing resume, who has the added benefit of spending the last half-decade coaching as an assistant for the Spurs. Mike D’Antoni is also probably about to be available, and was the first name Woj mentioned when the job came open.

But that Billups could get to the top of lists like this shows just how revered he is in league circles. Ty Lue is also probably going to get a job if he wants one this offseason, and if Woj is accurate, Lue seems to have an open door for Billups to join him wherever he goes. It feels like if Billups wants to make this move now, ESPN might be looking for a new analyst.