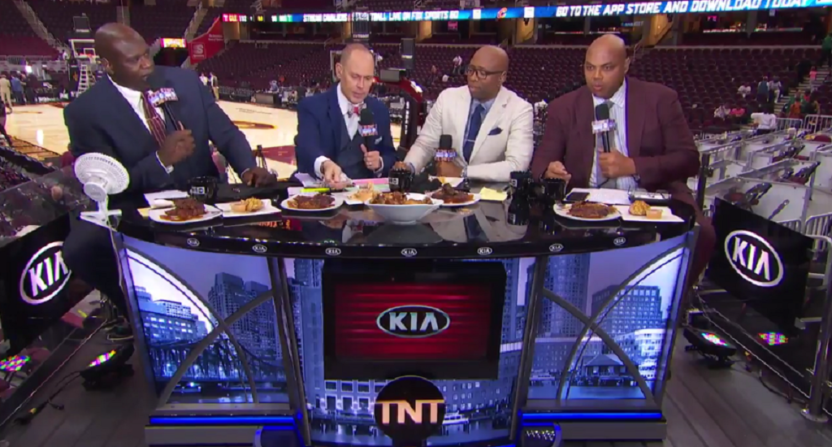 To keep east coast viewers, who will likely be drowsy from a long day of presents and eggnog (or pepper steak and beef lo mein for this reporter), excited and tuned in after nearly 11 straight hours of basketball, TNT is bringing in the big guns for its first Christmas day broadcast since 2014.

The Inside The NBA crew of Ernie Johnson, Charles Barkley, Kenny Smith, and Shaquille O’Neal will be calling the Lakers-Timberwolves game at 10:30 eastern on Monday live from Staples Center with sideline reporter Kristen Ledlow. Johnson and Ledlow spoke to Awful Announcing about how a four-man booth that’s not used to preparing before its broadcasts will work its first ever regular season game together.

“I think it’s probably going to be an extension of our show combined with a bit of your traditional play-by-play game, but it’s gonna be a mix of the two and I don’t know which side is gonna win out,” Johnson told Awful Announcing, though he probably knows which side is going to win out. “Four voices courtside is a lot to fit in a broadcast, but we’ll find a way.”

For people looking for a regular kind of telecast, you won’t be finding it on TNT this Monday.

“I think we’d be fooling ourselves to say that we’re going to go out there and try to make it a traditional broadcast,” Johnson said. “I don’t think that was ever the point.”

The Inside The NBA crew will do a quick pregame show courtside, with an announce table that’s extra long and wide, a necessity when O’Neal and Barkley are two of your four broadcasters. Ledlow, working her first Christmas day game, will handle pregame interviews, in addition to interviewing players rather than coaches after the first and third quarters. She’ll also be handling some of the halftime responsibilities.

“We have to feed Shaq and Charles at the half,” Johnson said. “You don’t want to head into the second half of that game with them begging for food and them saying that they’re hungry.”

After the game, the TNT crew will go through the day’s highlights and some of the Lakers and Wolves players will head to the courtside set for player interviews.

As for how the actual game will go with not just a four-man booth, but these four people?

“We’re gonna kinda figure it out along the way, which is what I guess the NBA on TNT is kinda known for,” Ledlow told Awful Announcing. “I think this flow is probably going to take me in directions that I have not gone in on our broadcasts leading up to this point.”

Johnson is going to try to get some play-by-play in, but there will be stretches where the usual Inside The NBA discussion completely takes over.

“There’s probably gonna be a few times where it’s three or four trips down the floor where they’re either arguing or making some kind of a point,” Johnson said. “So I fully anticipate that, and it’s gonna be different.”

Johnson called a Chicago Bulls-Miami Heat game with Barkley and Smith in 2010, but that was the last time this group called a regular season game together, per a Turner Sports spokesman.

“A lot of it is just gonna be an extension of our show,” Johnson said. “If these guys are engaged in a lengthy conversation, that goes with the territory when you put us all together on the road.”

Ledlow said that working on the league’s signature day is a dream come true, telling her mom about 10 years ago that she wanted to reach the point in her career where she can be a part of the NBA on Christmas.

“To look back now over this last decade and everything that it has taken to get to this moment, is a really cool and special thing,” she said.

And for her first Christmas day broadcast, she might not be on the air very much, which she acknowledged.

“I’m fully prepared not to get a word in edgewise apart from what I’ve been told to say in advance, which is completely fine because those are the guys everyone wants to see on Christmas day,” Ledlow said. “We were joking the other day in the office that even if this game were to get cancelled, I think we’d probably be good to go for about a three-hour broadcast.”

Johnson aptly compared what will probably happen on this broadcast to two to three hours of bonus coverage, where the quartet will be watching a game and just riffing on what happens. Except in this case, they’ll be courtside in Los Angeles instead of in a studio in Atlanta.

As for future Christmas day broadcasts, either on TNT or including the Inside The NBA crew, there are no current plans one way or the other. We’ll see how well this experiment goes and whether or not it goes completely off the rails.

“Maybe it it really goes off the rails then they will want to do it again,” Johnson said.