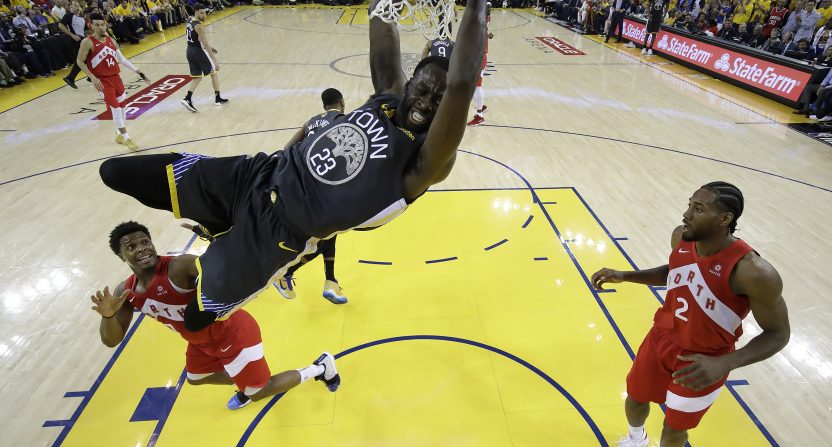 The NBA is full of teams for whom tanking isn’t so much a strategic choice as it is an inevitability of their own dysfunction. The Phoenix Suns are such a team, managing to squander a series of high draft picks en route to missing the playoffs for the last nine seasons, with a tenth season all but assured.

One of those former picks: Marquese Chriss, now with the Golden State Warriors, and looks likely to be part of the rotation, at least early in the season. Obviously things didn’t work out in Phoenix; the Suns ended up trading him to the Rockets, who then dealt him to the Cavs, meaning Chriss is now on his fourth team already. But considering the state of the Suns, it’s hard to pin that all on any one player, much less Chriss, yet when a high draft pick ends up out of town before he can help the team, the “bust” label is quickly applied.

Draymond Green certainly thinks that’s the case; he had no issues pointing out how a bad fit or an incompetent franchise can essentially prevent a player from succeeding. Via ESPN:

“[People] always want to blame the kid,” Green continued. “It’s not always the kid’s fault. He’s getting older now, so he’s not a kid anymore. But he came into this league as a kid, but it’s never the organization’s fault. It’s always that guy. So I’m happy he’s gotten the opportunity show what he can really do because it’s a prime example. But no one will still blame any organizations. It’ll always be the kid’s fault, and it will be the next kid that comes in’s fault and the next kid after that. So I’m happy he’s gotten this opportunity.”

Green’s point is a solid one. There are plenty of franchises that are praised endlessly for their ability to consistently draft and develop talent, leading to a fairly consistent baseline of success. We always hear that about the Spurs, and we see it in stories like this week’s Jonathan Abrams profile of the Pacers. We don’t often see much of the inverse, though, and Draymond had thoughts on who to blame for that as well: the media. As to why:

“Because you’re friends with them,” Green said. “And you want all the access from them. So the way you guys will come out and bash players, you don’t do that to organizations because it’s all about access and protecting your future. No one really protects these younger guys’ future because it’s all about what can I do for myself. So no one talks about the organizations. It’s always just the player, player, player because they can’t do s— about it but be young and their name carries no weight and then be out of the league and onto the next thing. So that’s what I think it is. No Phoenix writer is going to bash the Phoenix Suns. But let’s be frank about it: When he was there, the organization was terrible. Everything was going wrong, but he get blamed like he’s the problem. When he left, ain’t nothing go right. So that’s my take on it.”

Green’s point is a fair one. The share of credit the competent organizations get for developing talent certainly seems disproportionate to the share of blame the incompetent teams take when they don’t play well. Obviously on a case-by-case basis, there are probably plenty of columns and stories written that point out the flaws of teams like the Suns, but the very concept of a draft bust is that of a player who failed his team, not the other way around.

Not all media members are complicit, and some that are certainly don’t do it consciously. But if it’s true that a culture and system can make anyone look good, the inverse is also true, perhaps even more so; a lesser player can arguably flourish in a better situation more easily than a good player can overcome a terrible one. It’s something to consider, especially if Chriss lights it up for the Warriors this year, and we get stories about how Golden State deserves all the credit for it.