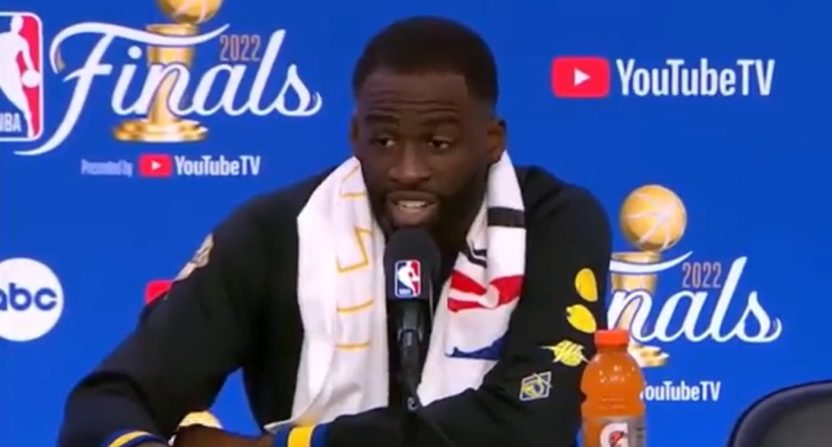 Draymond Green continued his crusade against traditional sports media Wednesday night by lashing out at a reporter who asked a reasonable question.

Green has been abysmal through three games this NBA Finals, committing more turnovers than field goals. Wednesday night was no different, with Green playing 35 minutes before he fouled out with just two points, as the Golden State Warriors dropped Game 3 to the Boston Celtics 116-100. Green, by his own assessment, played like “shit” and was “soft,” an apparent reference to Stephen A. Smith and Chris “Mad Dog” Russo who have led the argument that modern NBA players aren’t as tough as previous eras.

Following the game, Jake Fischer of Bleacher Report brought up Green’s podcast and asked whether the Boston Celtics could be taking advantage of his decision to broadcast postgame analysis.

“Are you conscious at all of what you’re saying about the X’s and O’s of the game plans, the adjustments, could be making their way back to Boston staffers and influencing their decision-making at all?” asked Fischer.

Draymond gets annoyed with reporter who asked if he was worried the Celtics were listening to his podcast for intel pic.twitter.com/JbIQzXIR9K

Green didn’t take well to the question, laughing it off and criticizing the reporter for “reaching for something.”

“No. I don’t see much difference on the podcast than I say to you right here, so nah,” Green said. “What’s the X’s and O’s that I said on the podcast?”

It was a fair question, not necessarily because Fischer or anyone believes the Celtics are locked in to Green’s podcast to help formulate their game plan. But Green has marketed himself and his podcast as being part of the “new media.” And when this “new media” releases podcasts titled “NBA Finals preview” or “Game 2 recap,” you would expect it to offer analysis that you’re not going to get anywhere else.

“That’s just contesting shots. If that’s X’s and O’s, you’re reaching for something,” Green responded. “It’s all good, though, keep going. You’re reaching heavy…You went for it. Appreciate the podcast promo you just gave me, though. The Draymond Green Show. Next time just mention it that way.”