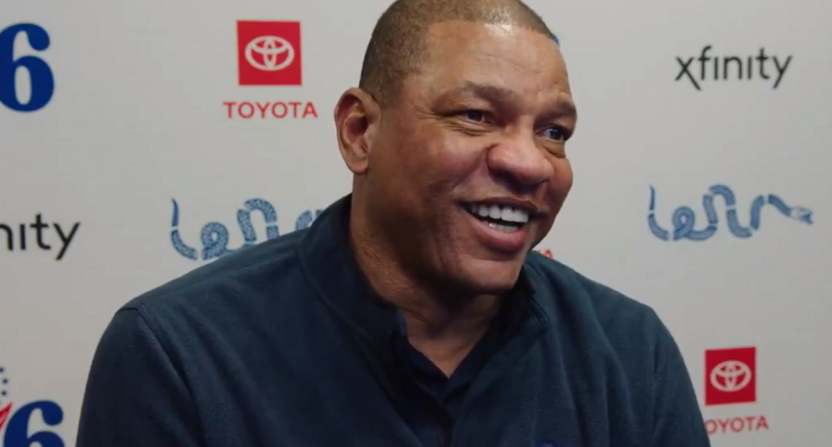 The rise of remote press conferences led to a fun moment last night in Philadelphia.

Following a 118-113 home win over the Rockets, Sixers coach Doc Rivers was taking postgame questions via video conferencing. Doc interrupted one question from reporter Jackson Frank to ask one of his own:

Doc Rivers called out a reporter after he asked a question while laying in bed ? pic.twitter.com/CN7c1Ocoyn

“Jackson, are you in bed right now?”

Here’s the view that prompted Doc to bring it up:

Things you thought you would never hear Doc Rivers say

Doc shaming me for not having a work desk at my parents’ house, a place I do not live!!! https://t.co/kGOS57Ql7l

Here’s the clip, everyone. And I’ll have you all know Doc still answered my question in detail! https://t.co/WnRFIK1AbP

Hey, sometimes in a guest room there’s not much to work with from a seating perspective! And beds aren’t made for sitting. There’s no shame there! Honestly it’s just nice to see some of the absurdities the pandemic has pushed people into pointed out in a lighthearted way.

Even just in February of 2020, imagine earning that in one year not only would Doc Rivers would be coaching the Sixers, but that he’d be fielding postgame questions via Zoom from a reporter lying in bed, and it would be just a quick fun moment and not really that out of the ordinary.

Anyway, in sum: working from home leads to some weird setups, and credit everyone involved here for having a sense of humor.