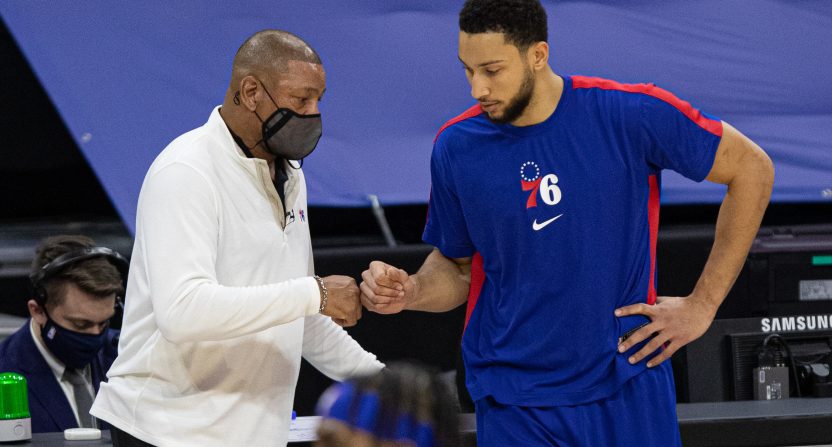 Things got crazy last night in the sports world with the Jon Gruden story hitting a breaking point.

About thirty minutes after reports first came that Gruden was resigning in the wake of racist/misogynistic/homophobic emails becoming public, Woj reported that Ben Simmons was back in Philadelphia and planning to return to the Sixers.

Credit the Simmons camp for picking the absolute best time to take that particular news dump. Before this weekend it was hard to imagine any scenario in which the (possibly temporary) end to the Simmons trade saga wouldn’t be grist for the daily news cycle mill, but that’s exactly what’s happened, for obvious reasons.

The Simmons news came not only during Monday Night Football, but during the middle of a Sixers preseason game; they were hosting Brooklyn, a game they won 114-105, not that anyone really cared about that after. Rather, the media in attendance were understandably interested in what the plan was for Simmons, although coach Doc Rivers clearly didn’t have much for them.

In fact, he noted that he might be forced to tap into the same resource that the rest of us have to use for NBA information.

#Sixers coach Doc Rivers expects Ben Simmons to be back with the team later this week: pic.twitter.com/ChE5CHl7Vw

“I’m gonna call Woj and find out what’s going on.”

That’s a solidly evergreen quote for people in the NBA, to be honest.

Related, here’s a visual reenactment of Simmons returning to the Sixers: