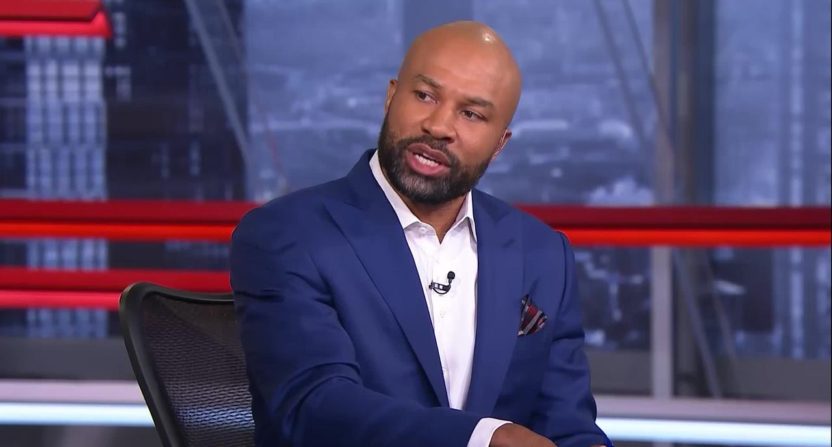 Former New York Knicks’ coach, NBPA president and Los Angeles Lakers’ star, and recent Spectrum SportsNet and Turner Sports broadcaster Derek Fisher is in some trouble with the law. Fisher was arrested on suspicion of DUI after overturning his car on the 101 freeway near Los Angeles around 3 a.m. Sunday morning. Both he and his passenger, former Basketball Wives star Gloria Govan (Matt Barnes’ ex-wife), escaped injury, but Fisher admitted that he had been drinking and was arrested. Here are more details on the crash from The Los Angeles Daily News:

The crash was a little after 3 a.m. on the westbound freeway, approaching the 405 Freeway interchange. Fisher, 42, was driving a 2015 Cadillac, the California Highway Patrol reported.

Fisher was driving in the number four lane, approaching the 405 interchange, when he allowed the vehicle to veer right and onto the paved right shoulder.

The Cadillac continued across the right shoulder and hit the raised concrete curb and wood/metal guardrail, on the shoulder.

The impact caused the vehicle to overturn, and it came to rest on its roof, blocking the three and four lanes of the northbound 101 Freeway.

…During the investigation, officers discovered that Fisher had been drinking, the CHP said. He was arrested on suspicion of driving under the influence of alcohol without incident.

This is just the latest twist in an unusual few years for Fisher. After a long NBA career from 1996-2014 and serving as the president of the NBPA from 2006-2013, he retired to take the Knicks’ coaching job in June 2014. However, he went just 40-96 (.292) with them for the next three years, and was fired in February 2016. And while he was the Knicks’ coach in 2015, he got into a fight with former teammate Barnes, who reportedly drove to Govan’s house (she was still married to him at that point, but separated) and attacked Fisher for being there.

Govan and Barnes made their divorce official in 2016, but Barnes (now with the Golden State Warriors) seems to have kept up the feud, jumping on Bleacher Report’s Instagram comments in January after they posted a quote from Fisher about him (from a profile by Kevin Ding) and saying “He sound real tough on here, he didn’t sound like that when he was running around my house screaming and pleading”: 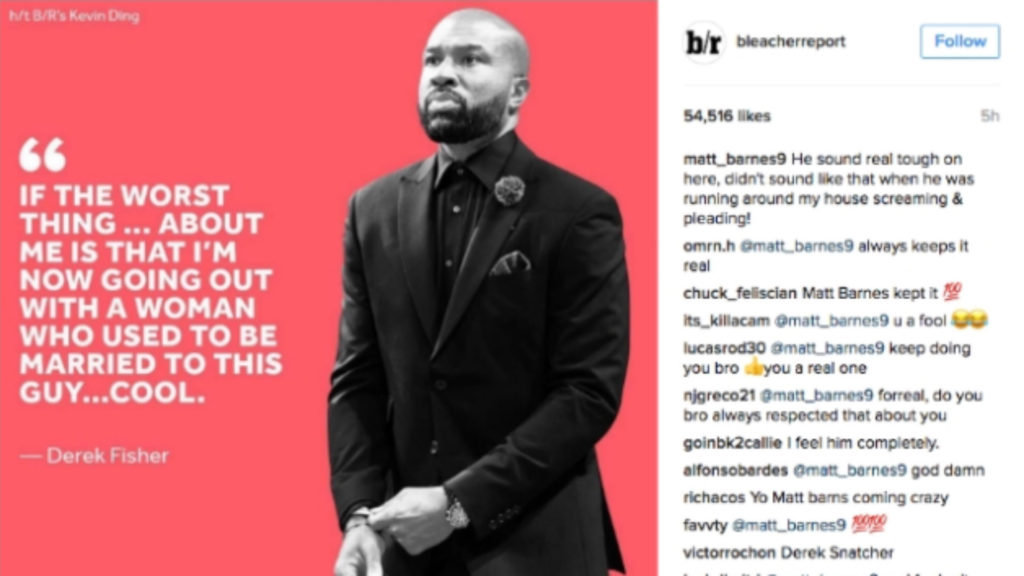 The interesting aspect of this to watch may be if it has any impact on Fisher’s broadcasting career. He’s served as a regular studio analyst for Spectrum Sports’ local Lakers’ broadcasts for the last season, and he’s worked for Turner Sports as well, joining the NBA on TNT as a guest playoff analyst in 2016 and as a regular presence on the Players Only broadcasts this year. There have been plenty of broadcasters who have lost their jobs over DUI charges; will Fisher be among them?