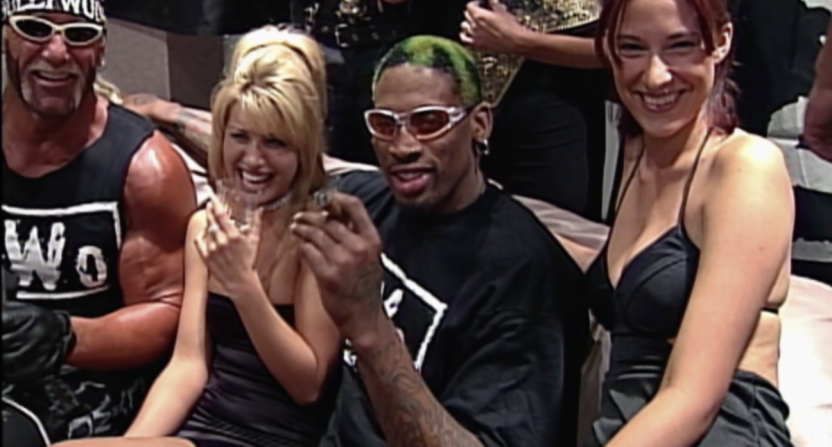 More than a year after The Last Dance aired on ESPN, it was probably inevitable that we’d see spinoff content from the 10-part Michael Jordan docuseries.

Someday, maybe we’ll get documentaries on the Jordan-looking-at-an-iPad or “And I took that personally” memes. A feature film needs a little more story, however. So an upcoming project will focus on one of the most intriguing stories from the 1997-98 Chicago Bulls championship season: Dennis Rodman’s trip to Las Vegas during the 1998 NBA Finals.

The working title for the movie is 48 Hours in Vegas, and is being produced by Phil Lord and Chris Miller (21 Jump Street, Spider-Man: Into the Spider-Verse). Rodman himself is one of the executive producers on the project. The film doesn’t have a director attached yet, but the screenplay is being written by Jordan VanDina (Animaniacs), who worked on the script during the pandemic.

Those who watched The Last Dance know that Rodman’s trip to Vegas was a key storyline in Episode 3 of the docuseries. The Bulls had a 2-1 series lead over the Utah Jazz in the NBA Finals, coming off a dominant 95-54 victory in Game 3.

Rodman was nowhere to be seen during practice and a media session the next day, for which mandatory attendance was required. According to a report at the time from the Chicago Tribune‘s K.C. Johnson, Rodman sent word to coach Phil Jackson through an assistant trainer that he wasn’t feeling well and needed to rest. His absence cost him a $10,000 fine.

According to Deadline, 48 Hours in Vegas will follow Rodman during his trip to Vegas, depicting the story that hasn’t been told. Particularly interesting is the mention of a “skittish assistant GM” that accompanied Rodman and the “budding friendship that neither one of them ever thought was possible, but will end up solving both of their problems.”

Is this where the story will take some dramatic license for entertainment purposes? The assistant GM character might represent the audience’s viewpoint, a “normal” person following Rodman through a wild and crazy road trip buddy comedy. And is he a fictional creation for the movie? Jim Stack was the assistant vice president of basketball operations, but who was the “assistant GM” at the time?

Rodman’s NBA Finals getaway wasn’t the first time he left the team during the season to visit Vegas. During the regular season, Jordan even went to Vegas to get Rodman after he didn’t return to the team when he said he would.

But Rodman showed the Vegas excursion didn’t hurt him. In Game 4 of the Finals, he shut down Jazz star Karl Malone on defense while grabbing 14 rebounds and even hitting six of eight free throws.

“Dennis refused to follow the herd,” Lord and Miller said in a statement announcing the project (via Deadline). “That is what made him a target and it’s also what made him a star. His weekend in Las Vegas is full of fun and high jinks but it is also full of important questions about the way public figures and workers are treated, especially when their individuality is expressed so vividly.”