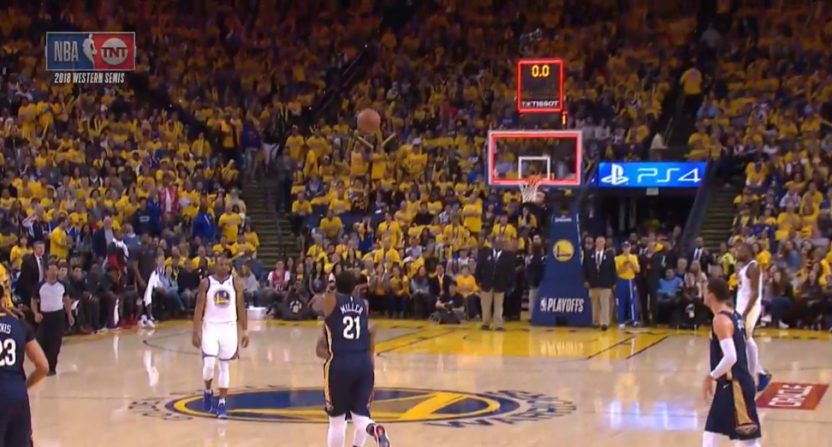 After a first-round sweep of the third-seeded Portland Trail Blazers, a series where all 22 ESPN personalities surveyed picked Portland, things were looking pretty good for the New Orleans Pelicans. They’d won their first playoff series since 2007-08, a year where they were still the Hornets, and they were moving on to the second round.

But running into the Golden State Warriors often isn’t a good thing, and that’s continued so far for New Orleans in Saturday’s Game 1, a game where they trailed 76-55 at the half. And that could have been even worse if not for a crazy buzzer-beating heave from Darius Miller near the end of the second quarter, one that brought up memories of what J.R. Smith did just six days ago.

Even that didn’t go perfectly for the Pelicans, as Marv Albert mixed Miller up with teammate Rajon Rondo at first:

“Rajon Rondo from deep in the backcourt!” Yeah, not so much. Good for Chris Webber for getting it right on the replay though, and Albert followed up with a correction of his own after the officials confirmed the shot was good:

That’s one of the few things that’s gone right for New Orleans, as they trail 91-68 partly through the third. Still, at least Miller gave them a great highlight, even if Albert got his name wrong at first.