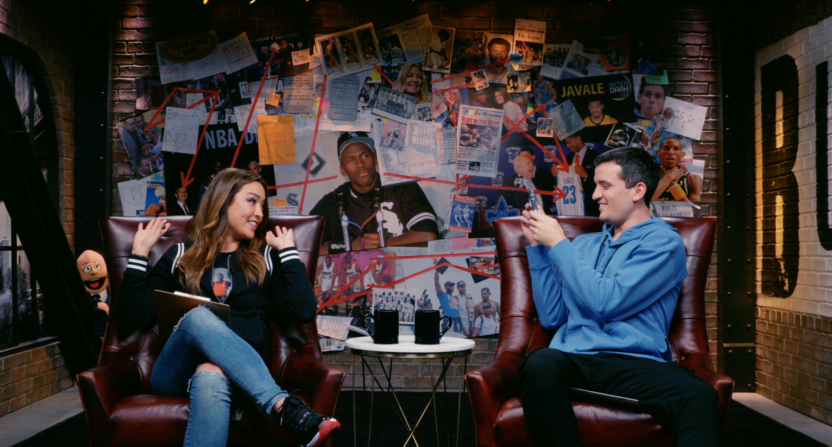 On a Monday afternoon inside Cycle’s sprawling new offices overlooking the East River in the DUMBO section of Brooklyn, Rob Perez and Cassidy Hubbarth walk downstairs to their television set to record a conversation via Skype with Jeanie Buss, the president and controlling owner of the Los Angeles Lakers, for their online NBA-centric show Buckets.

Perez, 30, better known as @World_Wide_Wob to his 150,000 Twitter followers, earned a reputation over the last several years as a prominent curator and tastemaker on NBA Twitter, the vast community that posts comments, videos GIFs and memes about anything having to do with pro basketball culture.

One time when he was broadcasting on Periscope, discussing his thoughts on that night’s NBA action, Buss popped up in the comments section. Over time, Perez gained a very powerful fan and Buss was happy to join the show.

In their casual, easygoing manner, Perez and Hubbarth, 33, asked Buss about secret tunnels inside Staples Center, her thoughts on Luke Walton as Lakers coach, her relationship with Magic Johnson, and a nod to LaVar Ball by asking about the role family and friends of players have with the team.

Buss conducted the interview inside her office overlooking the team’s practice facility, with several championship trophies in the background.

“That is beyond humblebrag,” Perez proclaimed. “Just flex on ’em, Jeanie!”

Unlike other stuffy owners and executives, Buss was in on the joke and the fun.

“Thank you for all the entertainment that you all provide,” Buss told Perez and Hubbarth as she signed off.

It’s that informative and fun basketball discussion Buckets provides that caused ESPN to partner with Cycle,a subsidiary of Wasserman’s Cycle Media, in October to ultimately combine Perez and Hubbarth’s talents for shows with an average reach of 1.4 million across all platforms for season two, per a Cycle spokesperson.

Perez and Hubbarth spoke with Awful Announcing before and after the taping of their latest episode in this bi-weekly season about their chemistry together, Perez’s everyman path to this point and the cultural cachet in the basketball world the pair now possesses. 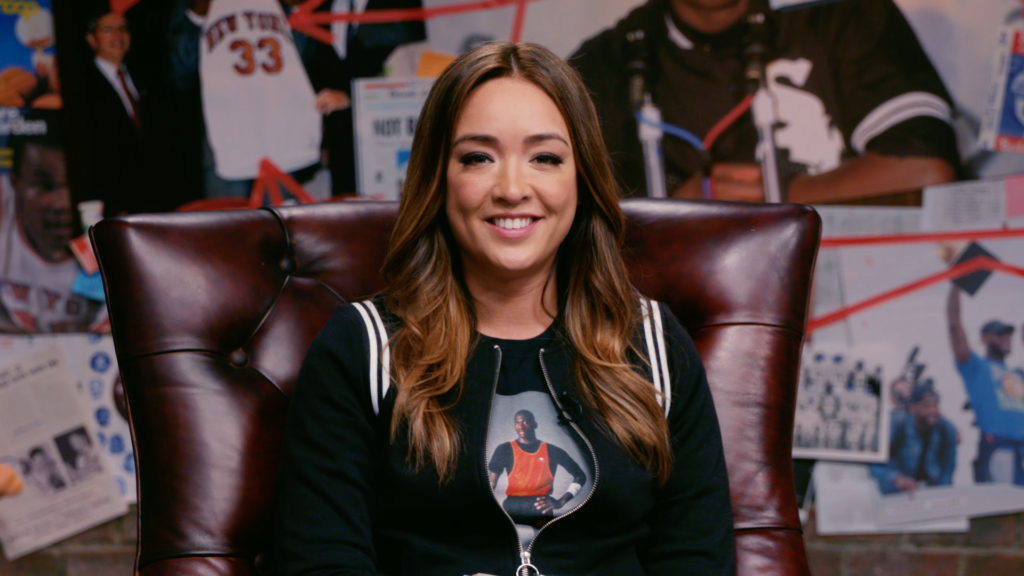 After graduating with a degree in broadcast journalism from the University of North Carolina, Perez found himself deeply immersed in the fast-growing world of the sports ticket resale business. He helped start a company called CrowdSeats, which Perez called “the Groupon for sports tickets.” After CrowdSeats was bought out in 2014, he no longer had to work 18-hour days and had his nights free to focus on his true obsession, the NBA.

As a diehard fan and League Pass devotee, Perez gravitated towards social media “to comment and watch games with other people” like everyone else. He then started a personal basketball blog focused on spreads, futures bets and what Perez called outside-the-box NBA stuff, trying to do stuff that people haven’t seen.

“I needed to write something,” Perez told Awful Announcing. “It was therapy.”

Between 2013 and 2015, Perez watched games and wrote about them religiously, and his following slowly, gradually grew.

“I remember writing thousands and thousands of words for pretty much nobody,” Perez said. “You gotta get started somewhere.”

When Vine launched in the beginning of 2013, Perez immediately gravitated towards it.

“Vine allowed me the opportunity to now instead of just typing what I’m thinking into a box, I could show you the video visually of what I’m referring to,” Perez said.

As NBA Twitter grew, so did Perez’s reputation, as someone who entered in on the ground floor of this Vine phenomenon.

“He was growing while NBA Twitter was growing,” Hubbarth, who was a longtime Twitter fan of Perez’s long before she ever met him, told Awful Announcing, “so his voice was amplified because he was leading the charge.“

Then Periscope launched in March 2015, and Perez was no longer confined to six-second basketball thoughts.

“It started with 50 people watching me eat pizza rolls drunk after the bar at 3 a.m,” Perez, who is really into pizza rolls, said, before he expanded to talking about basketball and other substantive issues.

Perez parlayed this success into more conventional sports media jobs, with stints at DraftKings, The Big Lead, and Complex before spending a year at Fox Sports between 2016 and 2017. Cycle was formed in early 2016, and  was looking for for the next social and digital content stars.

“This company specializes in finding people who are influencers,” Hubbarth said. “And there’s no denying that Rob is one of the biggest social media influencers when it comes to NBA Twitter.”

Cycle quickly reached out to Perez and said “we love what you’re doing and the concept of your basketball Periscope show,” according to Perez. “We want to put some resources behind it, give you bandwidth and essentially put money where their mouth was. And that was really the first time I’d gotten the opportunity to blow out the whole Periscope idea.”

Perez left Fox, ironically pivoting to video, and joined Cycle in April. The first season of Buckets was launched the next month.

Meanwhile, Perez and Hubbarth met on Twitter, and Perez slid into her direct messages “totally, head first,” he said, bonding over their shared love of the NBA. She became a fan of Buckets and eventually joined the show via Skype as a season one guest.

”When I went on Buckets last year, I was blown away by just the production value and the interactivity of it,” Hubbarth said. “I was on the show but I was also watching and being like what is happening!? I consume a lot of media, and the fact that he kind of put me on the back of my heels, like this is something new here, made me an even bigger fan.”

The two first met in person in July at the NBA’s Las Vegas Summer League and Perez mentioned that Cycle was considering bringing in a co-host for season two of Buckets. Hubbarth suggested a couple of names during the summer, but rumors of a deal between Cycle and ESPN— ultimately announced in October— got the pair thinking that she could join on herself.

Perez said he dropped everything to try to get Hubbarth on as the co-host, and the two began working together in November in preparation for the launch of season two in December. They quickly developed a strong rapport on and off camera, comparing their brother-and-sister like relationship to that of Michael Smith and Jemele Hill on SportsCenter.

Hubbarth, who we profiled in May 2016, has experience as an NBA and college football studio host and now as an ESPN NBA sideline reporter, but she said what Buckets is trying to do is different than ESPN offerings like “The Jump” or “NBA Tonight.”

Perez is constantly watching games and brainstorming content ideas for the twice-weekly show, which comes out on different days of the week to cater to Hubbarth’s ESPN travel schedule. Usually there’s a guest who they go shoot an interview with, whether via Skype like Buss and Indiana Pacers disruptor Lance Stephenson, or a taped on-site segment like they did with Cleveland Cavaliers guard J.R. Smith. As the editors and production team works on that, Perez begins to mold the show from an outside-the-box lens, emailing and conference-calling with Hubbarth and translating crazy concepts from paper to try to make a TV show out of it.

The ultimate goal of Buckets?

“To educate and entertain an audience that didn’t know things were happening that actually are,” Perez said. “To bring a new angle to the game, give them a new reason to watch.”

Upcoming guests include Nate Robinson, Jahlil Okafor, and possibly J.J. Redick, and Buckets has reached the point, Perez and Hubbarth said, where players and agents who have seen the show are reaching out to them to try and book an appearance.

As to how far he wants Buckets to go, whether remaining an online product, going to linear television or eventually shifting to audio, Perez wants to continue to have that uniquely engaging NBA conversation.

“As long as the creative remains what got us here, that’s ultimately the biggest goal,” Perez said. “Because I know that if the creative stays solid, we will check all of those boxes at some point. It’s proven to go from a kitchen to here, and I’m gonna continue to do what’s gotten us here.”