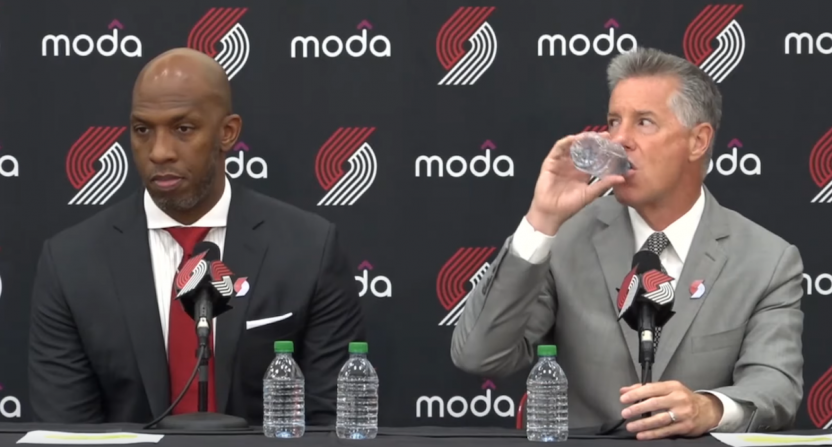 The Portland Trail Blazers did no favors for Chauncey Billups.

By preventing their new head coach from answering direct questions about a 1997 sexual assault allegation that has compelled many fans to challenge and denounce the hiring, the Blazers likely felt they were protecting Billups. But in doing so, general manager Neil Olshey created more questions about how seriously those matters were addressed before going on with the business of basketball.

Olshey opened Tuesday’s introductory press conference for Billups by saying that the team conducted its usual background check and commissioned an independent investigation that corroborated Billups’ account of the events in question. Billups then followed up with his own statement regarding the incident.

Yet when Olshey was asked by Bleacher Report’s Sean Pushkin to further explain details of the investigation, the Blazers GM became defensive and claimed the findings were “proprietary.” Any attempt to convey transparency and sincerity to a concerned fanbase were blocked off behind claims that media and fans would just have to trust the team. “You have my word,” said Olshey.

Later, The Athletic’s Jason Quick asked Billups to elaborate on saying that what happened in 1997 has “impacted every decision that I make” and “shaped me in some unbelievable ways.” As Quick was speaking, Olshey looked over to Ashley Clinkscale, the team’s senior vice president of communications who was leading the press conference. Taking a sip from a water bottle appeared to be a signal to Clinkscale to step in and cut off Quick’s question.

“Jason, we appreciate your question. We’ve addressed this,” Clinkscale said. “It’s been asked and answered. So, happy to move on to the next question.”

(You can watch the exchanges in the video above. Pushkin’s question comes at the 17:48 mark, while Quick’s is 24:06 into the presser.)

Billups looked as if he was going to answer Quick before Clinkscale stepped in. And the team should have let him do so.

It’s possible that Billups would’ve said something similar, that this was already addressed. But what if he was going to say something else? What if he had more to say than the platitudes he first offered, even if they were genuine? This was an opportunity for Billups to convince detractors that he learned from the experience, how it influenced his playing career and coaching, that the entire circumstance was a lesson in accountability.

Here is Trail Blazers PR shutting down a valid question from @jwquick about Billups and the 1997 sexual assault allegations.

Billups and the Trail Blazers could have won the press conference in that moment, even if some might never have been satisfied with anything he said. The new coach could’ve set the tone for his tenure. Of course, maybe he wouldn’t have. But cutting him off looked bad — especially when a short clip of that exchange was posted to social media and invoked the wrath of fans and media.

Clearly, a decision had been made among team officials that nothing more would be said beyond the opening statements. Olshey, Billups, and Clinkscale had to know more questions would be coming from the press. And if the intention was always to dodge and cut off those inquiries, why have a press conference in the first place?

That’s why meetings like this are called a press conference. It’s a setting in which information is presumably exchanged. If the Blazers had no interest in any discussion, they could’ve just issued a release and posted statements on checking into Billups’ background to video. Billups could’ve said how much he respects Damian Lillard and that the team needs to play better defense without taking questions.

Can’t happen. Either own it or don’t hire him. Billups seemed ready to answer it. If you hire someone who has done something in their past you don’t trust them to talk about, you shouldn’t hire them. Period. https://t.co/JnVTE3rOM6

[On a personal note, Chauncey Billups is one of my favorite athletes from a lifetime of sports fandom. I’ll always admire him for leading my beloved Pistons to the 2004 NBA championship during his eight seasons in Detroit, and I’m eager to see if he can apply that same authority as a coach. Yet had I known about the 1997 allegations at the time, I might have felt differently. He needs to answer for what happened and address it beyond platitudes and a PR shield.]

Yet the Blazers likely held a conventional press conference because they wanted Olshey and Billups to face the media. Perhaps the thought was that they could satisfy concerns and curiosities with well-crafted statements and appealing personalities. Sometimes, that’s enough. But not in this instance.

“Just trust us” and “you have my word” are not sentiments that have ever been sufficient in journalism. Reporters are supposed to question authority, to give voice to the concerns of their readership, not just accept what’s handed to them. Even when fans might think the media is trying too hard to dig up dirt.

There were valid questions that deserved an answer, and the Blazers didn’t fulfill their part of the exchange as they tried to ham-handedly control the message. That rarely works, especially when fans and media are rightly skeptical of Portland’s current front office. As Olshey said himself, “some things are just bigger than basketball.” But saying that and following through on that assertion with conviction are two different actions.

The Blazers could have began the Chauncey Billups era with a big shot. Instead, they missed the rim badly and stirred a whole lot of doubt.