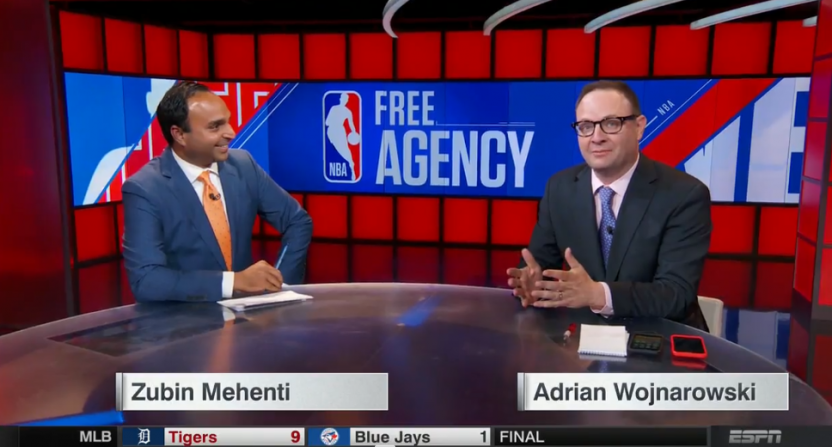 The opening of the free agency period has become one of the key moments in the NBA calendar, especially when it comes to moves like LeBron James heading to the Los Angeles Lakers. However, both the opening of that period (12:01 a.m. Eastern Sunday) with several initial moves and James’ announcement (8:05 p.m. Eastern Sunday) came at times that were far from ideal for media coverage; with the latter, ESPN had to even break into their Sunday Night Baseball coverage with the news, and their ongoing James analysis was pushed to ESPNEWS. And with a lot of the big free agency dominoes already falling, things like ESPN’s weekday afternoon First Take NBA free agency specials will have less news to cover. (Not that that will stop Stephen A. Smith and Max Kellerman from having takes, but it’s still not ideal.)

Of course, it’s impossible to predict or enforce just when any year’s top free agent will announce his decision (unless you do a televised The Decision, and we all know how well that went for everyone involved). But this year’s free agency moves might urge the NBA to try and shift the opening of free agency to a time more favorable for media coverage, and that could have a knock-on effect, with certain moves then likely to follow at a more favorable time. And that could also work well for players and executives, who could start their official conversations and announce deals at a better time. (It should be noted that this is all just discussions for most players, as the majority of contracts can’t officially be signed until July 6, but unless someone pulls a DeAndre Jordan (who, hilariously, has again verbally committed to the Mavericks), the discussed moves are happening.)

There are a couple of different elements to consider here. One is the free agency period being linked to the first of the month rather than the days of the week, which is what made this year’s free agency stand out as particularly poorly-timed for media coverage compared to other years. The 12:01 a.m. Eastern start is pretty usual, in basketball and in other sports, but having that fall on a weekend this year was rough from a media perspective. And yes, it’s easier from the contracts side to just say all contracts expire as of June 30 each year, but changing that so free agency would always open, say, at 12:01 a.m. on the first weekday in July might have some advantages from a media perspective. (The first weekday seems like a better bet than “the first Monday,” as then there’s no chance of it falling on the July 4 Independence Day holiday.)

But beyond that, having free agency open at 12:01 a.m. Eastern isn’t the most practical solution. Again, that’s probably done because it’s easier for contracts and because it’s always been done, and other leagues do it as well. But it should be possible to set that time to whatever the NBA and the players’ association agree on, hopefully in consultation with media partners. Other elements such as trade deadlines are in the middle of the day, and those have turned into media extravaganzas (especially when it comes to the NHL trade deadline in Canada).

Of course, something ESPN in particular would have to work around is their Wimbledon rights, but their coverage wraps up at 4:30 p.m. Eastern on weekdays during the early round. Opening the free agency deadline up in primetime could make for quite a media event, and could perhaps pull in significant ratings. But even a during-the-day deadline would work better for many media outlets across television, radio and print.

And this isn’t just about keeping media outlets happy; in fact, that’s the lower concern. The bigger issue is that the NBA has an event that’s generating tremendous interest, something that could theoretically be held at any time they and the players’ association agree on, and it’s happening at midnight on a weekend when many media can’t give it a full-court press. And the timing also means that the opening in particular is being followed more by the hardcore fans (especially on the East Coast) than by casual fans. Making the deadline at a more media-friendly time could pay significant exposure benefits for the league.

This is part of the larger commodification of news, too. Players have already taken plenty of initiative in finding particular ways to share their news that benefit them, from LeBron’s letter in Sports Illustrated through Kevin Durant’s Players’ Tribune piece through even smaller things like leaking to a particular reporter. And that makes sense; their news has value. But it has even more value if done at a media-friendly time. And the NBA might be smart to consider that, and to capitalize on the interest around free agency by making it into more of a media-friendly environment.