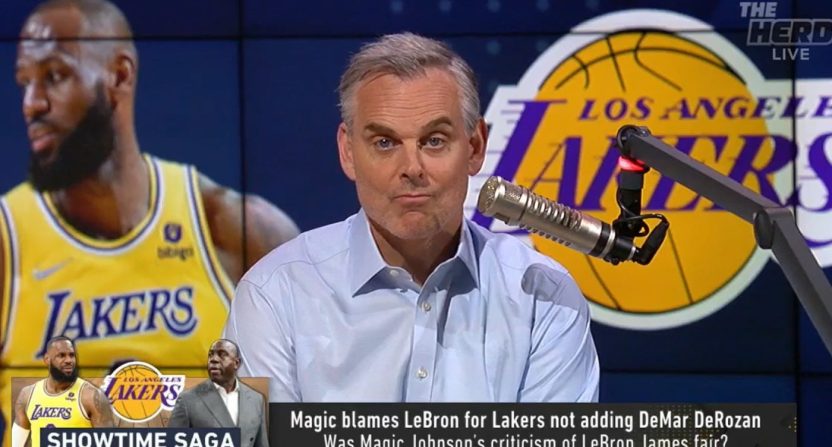 Magic Johnson went on a media tour at ESPN this week, appearing on Get Up and First Take where he faulted LeBron James for playing general manager of the Los Angeles Lakers.

Johnson made sure to specifically broadcast that James chose Russell Westbrook over DeMar DeRozan for the Lakers last summer. DeRozan has been an MVP candidate, while Westbrook has helped lead the Lakers to a potential 50-loss season.

“The blame that he’s got to take is the fact that DeRozan ended up in Chicago and not with the Lakers,” Johnson said of LeBron. Why did Johnson go on ESPN with the apparent goal of faulting James for the Lakers’ mess of a season? According to Fox Sports Radio host Colin Cowherd, Johnson was doing a solid for Lakers owner Jeanie Buss.

Cowherd says the Lakers used Magic Johnson to take their franchise back from LeBron pic.twitter.com/RkJhG9mx1P

“Magic’s known this for a long time, why did Magic now decide to go public? Because he is close with Jeanie Buss, a very strong woman,” Cowherd said. “And Jeanie Buss said ‘Magic, I’m done taking all the heat for this. I’m tired of getting ripped by the media, do me a solid.’ So Magic Johnson went on ESPN, he got the go-ahead from Jeanie Buss.”

The Lakers seemingly can’t rely on ESPN employees to push their own narratives, with Ryen Russillo recently complaining The Mothership acts as a soft-landing spot for James. This is why Cowherd believes the Lakers sent Johnson to do their dirty work.

The Lakers balked at trading draft picks during the season, despite apparent calls from James to make a deadline deal. But how the Lakers handle this summer will be telling in terms of what kind of clout James still carries within the franchise.