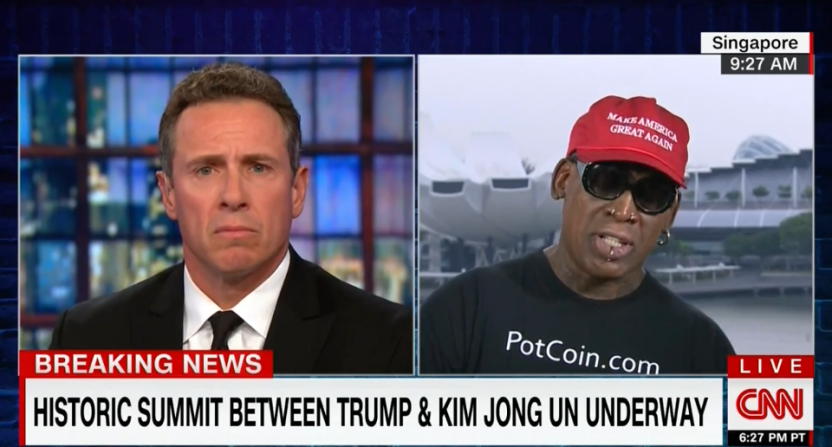 With President Donald Trump in Signapore for a one-on-one meeting with North Korean leader Kim Jong Un, CNN is obviously going to be covering that summit. But just who did they pick to interview for analysis of what’s going on? Former Chicago Bulls star Dennis Rodman, of course, who infamously went to North Korea several years ago and keeps inserting himself into these discussions ever since.

Here’s a clip from near the start of Rodman’s interview (note Make America Great Again hat and PotCoin.com t-shirt) Monday with CNN’s Chris Cuomo. It involves Rodman him talking about how he brought a professional basketball team to North Korea (back in January 2014) with the help of sponsor PotCoin:

Later on, Rodman broke down in tears when talking about how happy he is to see this summit:

Some selected quotes from these segments, via The Hill’s Brett Samuels:

“We have really put ourselves on the line to reach out to North Korea and they have been so gracious to me, my family and the United States. So let’s make this happen. If Trump can pull this off, more power to him,” Rodman said on CNN.

Rodman talked about “falling in love” with the people and culture of North Korea, and described Kim as “a good friend.”

…Rodman said Kim understands “bits and pieces of English,” and described as “more like a big kid even though he is small.”

…”Everybody came at me and I am still standing,” Rodman said, tears streaking down his face from behind his sunglasses. “And today is a great day for everybody. I’m so happy.”

Rodman also delivered an Oscar-worthy speech of thanks:

There are just a couple of problems with this. For one, Rodman dodged a question about North Korea’s dismal human rights record with “I don’t need to know about the war stuff going on,” which is a pretty good reason not to interview him here. (Then again, Cuomo’s previous interview highlights include talking to LaVar Ball for 22 minutes, so he doesn’t have the best track record. And Cuomo interviewed Rodman in 2014 as well, and it led to Rodman yelling at Cuomo when he asked about an American held prisoner in North Korea, and later apologizing and saying he had been drinking.) For another, even though Rodman has met with Kim Jong Un in the past, there’s no indication he’ll play any role in these talks. And Trump’s 2014 opinion of Rodman is perhaps relevant:

And for another thing still, the post-Rodman interview suggestion that “He is our best resource at this point for understanding the minds of these two men” is just insane. Look, CNN has a long tradition of ridiculous celebrity interviews (after Rodman’s, they ran a promo for an upcoming sitdown with Kim Kardashian West about politics), but this is bad even by those standards. “Dennis Rodman weeping on CNN in a Make America Great Again hat and a Potcoin.com t-shirt while discussing North Korea” does sum up 2018 pretty well, though.