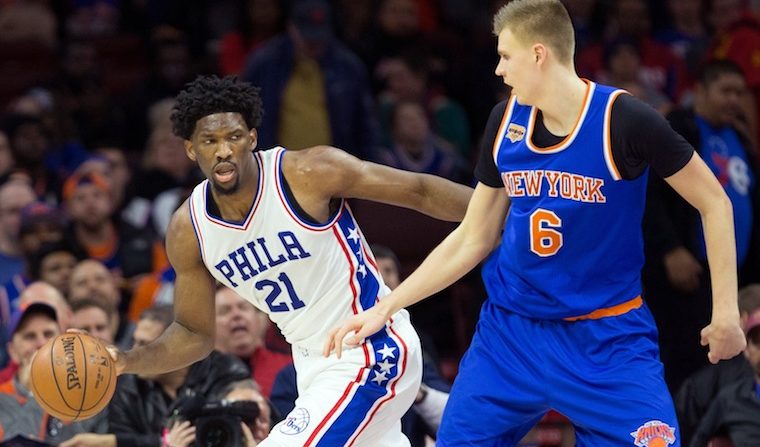 Christmas Day is always the marquee regular season date on the NBA schedule, and five games will be spread across 13 straight hours and three different networks, ESPN, ABC and TNT.

Here are 10 things you’ll want to watch on Monday, one for each of the participating teams. (All times listed are eastern.)

League and network executives wanted to show off Joel Embiid, Ben Simmons and the rest of The Process’ young stars on Christmas, and both should be in the lineup at Madison Square Garden on Monday after Joel Embiid played in Saturday’s loss in Toronto, his first action in four games.

That’s the good news. The bad news is that Embiid has missed six of the Sixers’ last eight games with a bad back and other maladies and Philly has lost seven of them, while the team has dropped nine of its last 10 overall to fall out of the East’s top eight.

It’ll be Embiid’s first career game at MSG, and the team and its rabid fan base will be relying on the big man to get this Sixers team back on track. Even if the game turns out to be a dud, you know Embiid’s Twitter and Instagram will make up for it.

For a team that’s won just one playoff series since the 1999-2000 season, Knicks fans get optimistic really easily. Their home win against Boston on national TV on Thursday without Kristaps Porzingis in the lineup got people talking playoffs and elevated Michael Beasley, who scored 32 points that night, to near-mythical status.

The Knicks improved to 15-5 at home, tied with San Antonio for the most home wins in the league. The bad news is that New York is 2-10 on the road after losing in Detroit Friday night. But with KP healthy and the Knicks over .500, The Garden will be buzzing on Monday afternoon.

Besides Cleveland looking for revenge following its NBA Finals loss to Golden State last June, a topic of conversation that may come up is LeBron James’ impending July free agency. Will he stay or will he go? A lot of that depends on what happens between now and next June.

Point guard Isaiah Thomas, acquired from Boston in the Kyrie Irving blockbuster, is expected to make his Cavs debut within the next couple of weeks. How this surging (19-2 in its last 21 games) Cleveland team does with Thomas, and what it does with Brooklyn’s first-round pick, could help LeBron decide his fate. Until then, finding a way to beat this Warriors team will be at the top of the Cavs’ minds.

With Stephen Curry expected to miss Monday’s showdown with an ankle injury, Kevin Durant will be front and center for the Warriors as the main attraction. It’ll be his first matchup with Cleveland since torching the Cavs in the Finals and deservedly winning the series’ MVP award.

Hopefully, we’ll be getting a nice present of some individual LeBron-KD possessions, and a close game in the fourth quarter could end up being the most compelling basketball we’ll see during the regular season.

The Wizards definitely have this game circled on their calendars. It’s their first matchup against the Celtics since Game 7 of their Eastern Conference semifinal series, forever known as the Kelly Olynyk Game. Since then, Washington has vowed to return to the playoffs and emerge as Cleveland’s biggest threat in the conference.

This season, John Wall has missed 11 games and Washington is off to a disappointing 18-15 start, losing several close games in the process. A win over the Celtics would be an enormous confidence boost headed into the new calendar year.

The Celtics and Wizards do not like each other. After Washington wore all black to a game last January against Boston, saying it was going to be “a funeral,” the Celtics did the same in Game 6 of their playoff series in May.

Perhaps a game with this level of intensity can get Boston going. Since upsetting Golden State on national TV on Nov. 16, the Celtics are just 15-7, and are 5-5 in their last 10.

As ESPN’s Zach Lowe brilliantly wrote this past week, Houston is the biggest threat to Golden State right now, and perhaps for the foreseeable future. Chris Paul has integrated into this team better than anyone could’ve imagined, and the Rockets’ defense has been a hugely pleasant surprise.

Houston will have a chance to show a more casual audience the strides it’s made since last season, when it flamed out in a conference semifinal series against a San Antonio team that exposed many of its flaws. With Paul now in the mix, Houston has looked like the league’s second best team in the league by a longshot.

8) New Hope After A Lump Of Mediocrity

For the first six to seven weeks of the regular season, it looked like Thunder fans were going to get a big hunk of coal for Christmas. New acquisitions Paul George and Carmelo Anthony weren’t making the offense better, instead turning it stagnant and stale. An 8-12 start left this Oklahoma City team looking for answers.

Since then, the Thunder have only lost three times in the month of December, integrating Anthony into more of an off-the-ball role and doing more offensively to complement its third-ranked D. Oklahoma City was supposed to challenge Houston and San Antonio for the second-best team in the West. This matchup against Houston will allow OKC to show the progress it’s made since their disappointing first quarter of the season.

Minnesota head coach Tom Thibodeau is known for playing his starters longer in games than any team in the league. Wolves stars Jimmy Butler, Andrew Wiggins and Karl-Anthony Towns are all in the top 13 in minutes played per game this season. Perhaps this could be why Minny is 26th in the league in defensive efficiency.

On the other hand, Thibs’ plan is working right now. The Wolves are 19-13 and in first place in the Northwest Division with a top-five offense. Maybe he’ll give his starters a reprieve and not play them so much on Christmas? That’ll be as likely as Sir Charles and Shaq not arguing incessantly during this experimental broadcast.

As much as we’d all love to believe that this telecast won’t be about the Ball family on the Lakers side, it will be. With Lonzo on the court and LaVar prowling in the stands, the Balls and all their antics will be a major topic of conversation in the fam’s first Christmas game.

Lonzo is having a turbulent rookie season. His assist and rebound numbers are really good, but is statistically among the worst shooters in the NBA, though to his credit he’s been better the last several games. As for brothers LiAngelo and LaMelo, it’s supposed to be 67 degrees and partly cloudy in Los Angeles on Christmas, but 44 and very rainy in Prienai, Lithuania.