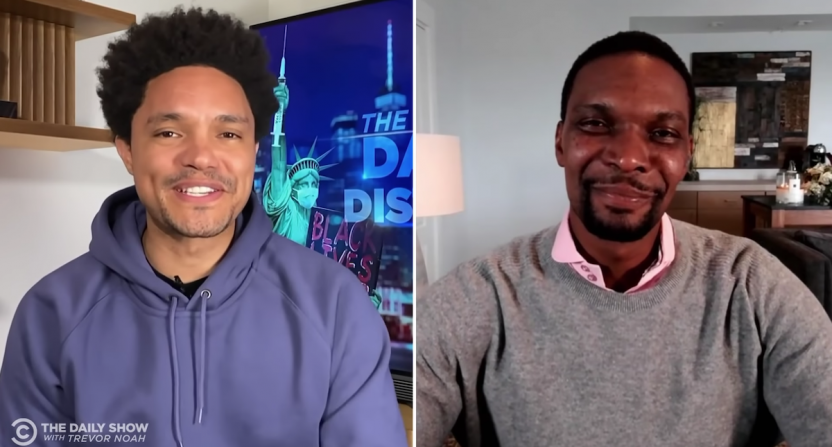 Of all the late-night talk shows currently on TV, there may be no better outlet for a former NBA star (newly inducted to the Basketball Hall of Fame) to discuss his new book on a playing career that prematurely ended and the lessons that taught him than The Daily Show with Trevor Noah.

With a remote format during the COVID-19 pandemic (dubbed “The Daily Social Distancing Show”), Noah has taken the opportunity to go more in-depth on subjects he wants to discuss, rather than cycling through the day’s news as he once did. That’s led to some thought-provoking commentaries and interviews regarding life in the pandemic, racial injustice, economic inequality, political division, and the Israel-Palestine conflict, among so many other topics.

Noah has also been intrigued by the growing dialogue on mental health in culture and sports. One of his recent guests was Jeremy Lin, who talked about experiencing anxiety during his NBA career, racism he’s faced on the court, and current violence toward Asian-Americans in our society.

So Bosh’s new book, titled Letters to a Young Athlete, fit right in with the sort of issues he wants to examine. During their conversation, Bosh and Noah discussed the NBA veteran’s “midlife crisis” after being told he could no longer play basketball (due to blood clot concerns) and what that taught him. You can watch the entire piece below:

“Society puts pressure on us and we put pressure on ourselves to know what’s coming next,” Bosh told Noah. “That’s not necessarily the point. We’re all human and we go through transitions. Going through grief is definitely one of those stages. What helped me is to realize where I am.”

Related: “I want to be the best off the floor”: Russell Westbrook talks about his Tulsa Massacre doc, charitable efforts with Trevor Noah

Bosh was recently inducted into the Basketball Hall of Fame, part of the 2021 class that includes Chris Webber, Paul Pierce, and Ben Wallace. During his 13 NBA seasons, he averaged 19.2 points and 8.5 rebounds per game. He also won two NBA Championships as part of “The Big Three” with LeBron James and Dwyane Wade, a trio that led the Heat to four consecutive NBA Finals.

The new Hall of Famer recently signed on with ESPN as an analyst for the 2021 NBA Playoffs, so he’s still watching the game closely. After saying this year’s field is “wide open,” Bosh admitted that he’s pulling for the Phoenix Suns, Chris Paul, and general manager James Jones, his former teammate with the Miami Heat. Maybe not the most objective analysis, but at least he’s honest about it.