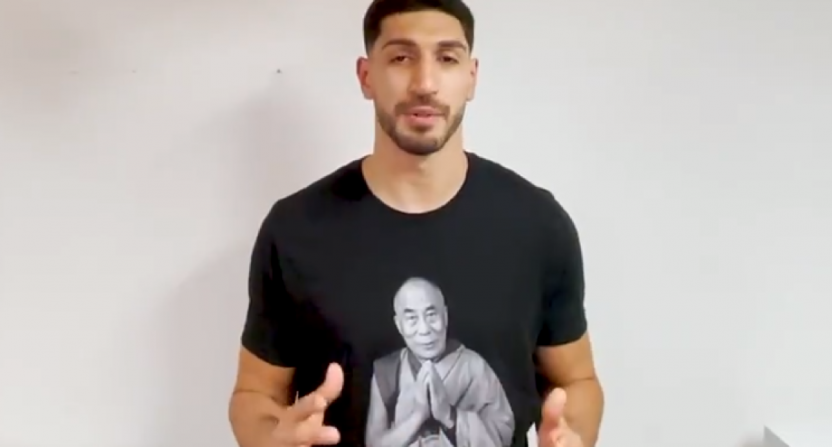 In a situation similar to the Daryl Morey Twitter saga, Chinese television has reportedly blacked out another NBA team in the wake of a human rights protest.

This time it’s the Boston Celtics, after center Enes Kanter posted a video to Twitter advocating for Tibetan independence.

The video has more than 500k views as of writing, and features Kanter describing in detail the various oppressions that the people of Tibet have suffered while under Chinese control. According to Eva Dou and Lyric Li’s reporting in the Washington Post, Chinese outlets took immediate action, yanking the Celtics from scheduled Tencent broadcasts.

The reaction was swift. The Chinese video-streaming giant Tencent cut the live broadcast of Wednesday’s NBA game between the Celtics and New York Knicks. On Thursday, Chinese social media was filled with angry fans calling for a boycott.

In the Tencent Sports app, upcoming NBA games are marked for live broadcast, except the games for the Celtics and 76ers, which will be reported by text and photo.

Daryl Morey now works for the Sixers, of course, which explains why they’re also on the blackout list. China takes these things very, very seriously; Woj’s Tencent show was yanked off the air in the wake of the ESPN reporter simply liking Morey’s tweet. Kanter’s protest was meant to be on-court as well, in addition to the video, though Kanter didn’t play in the Boston opener:

Kanter had planned to play Wednesday’s game wearing a pair of sneakers emblazoned with the words “Free Tibet” and an image of a man self-immolating, a desperate form of protest to which Tibetans have sometimes resorted, said Badiucao, a prominent overseas Chinese political cartoonist who painted the designs on the shoes.

The Chinese Foreign Ministry weighed in on the topic, essentially dismissing Kanter as a clout-chaser:

Asked about Kanter’s remarks at a news conference on Thursday, China Foreign Ministry spokesman Wang Wenbin called him “clout-chasing, trying to get attention with Tibet-related issues.”

“Tibet is part of China,” Wang said. “We welcome unbiased friends upholding objectivity across the world to Tibet. In the meanwhile, we never accept the attacks and smears on Tibet’s development.”

The situation isn’t quite the same as it was during the Morey situation in 2019. Back then, all NBA broadcasts went dark in China, leading to a revenue hit for the NBA. That’s presumably the difference between a team official speaking out and a player speaking out.

Kanter has a long history of speaking out for human rights, both in his native Turkey and around the world, to the point that he’s no longer able to travel to Turkey due to arrest warrants. The NBA has been supportive of Kanter’s efforts, too, going so far as to cut ties with a vendor who didn’t mention Kanter while running the NBA’s official Turkish account.

Hopefully the league’s support of player activism won’t be deterred due to their financial interests in China.