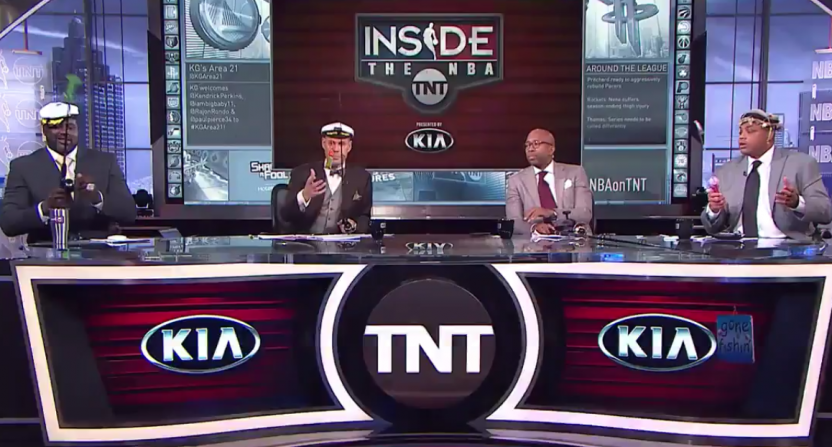 TNT analyst Charles Barkley has regularly bashed the state of today’s NBA, saying it’s “full of awful basketball” last March and “the worst it’s ever been” in December. His latest rant on the subject came Monday night following the Golden State Warriors completing their sweep of the Utah Jazz, and involved him bringing up hockey. It started with the TNT cast doing their standard “Gone Fishin'” segment for the Jazz, with photos of Utah celebrities on the boat, and Ernie Johnson commented on the Zamboni ice-cleaning machine on the waves (yes, inventor Frank Zamboni was born in Utah, although most of his fame came after he moved to Los Angeles at 19). That led to Barkley talking about the NHL (0:55):

The Utah Jazz are #GoneFishin! ? pic.twitter.com/gsTsykE0Xa

“Speaking of the Zamboni, thank god for the NHL playoffs; that’s what I’ve been watching in the back instead of these blowouts.”

Well, there you go, “please like my sport” hockey people, it actually worked! Of course, that’s probably just a laugh line, and part of Barkley’s further criticism of today’s NBA (his perspective is just a little biased in favor of his own era), but it does bring up some funny thoughts. What if Turner and NBC traded analysts for a game, and we got Charles Barkley doing NHL studio work and Mike Milbury on Inside The NBA? Would Barkley complain about how the NHL isn’t as physical as it used to be? Would Milbury attack Shaq with a shoe? It would definitely be must-watch TV.

Beyond that, though, this is just part of the larger pattern of Barkley ragging on the modern NBA and criticizing the Warriors in particular. He’s repeatedly said they couldn’t beat past great teams, and has blasted their “little girly basketball.” He’s also fired off plenty of shots at Warriors’ star Steph Curry, saying he’s “not more than a shooter, not a great playmaker” and ranking Curry below teammate Klay Thompson. And so, if a team Barkley dislikes that much keeps winning by so much, it must mean the NBA’s awful. But it’s interesting that even though he doesn’t like them, Barkley thinks the Warriors are going to walk away with the West, making him happy TNT has the Eastern conference finals and ESPN has the Western ones:

“Thank God we don’t have the Western Conference this year,” Barkley said (1:11). “The East’s got a chance of being competitive.” Kenny Smith then asked “You don’t think the Spurs have a chance of being competitive with Golden State?”, and Barkley responded “I do not.” Johnson then asked “Who has a better shot, Houston or San Antonio?” and Barkley answered “Zero plus zero is zero.”

It’s also interesting how Barkley’s tune has changed there. Smith talks about how Barkley’s opinions have changed from the start of the year, and Barkley admits that he got on the Clippers bandwagon because of ESPN’s Marcellus Wiley:

“Marcellus Wiley, he had me on the Clippers bandwagon, and I was wrong. Never let Marcellus…Marcellus, you were wrong!”

Smith then asked “Doesn’t he play football?” Then Johnson said “And you’re taking basketball notes from a football player?” Smith finished it off with a nice “I like the Giants, Marcellus.”

So, hey, maybe we can throw Wiley into the NBA analysts mix and have Barkley go talk about the NFL, if he isn’t too busy watching hockey. Barkley might prefer that to all these blowouts he keeps complaining about.