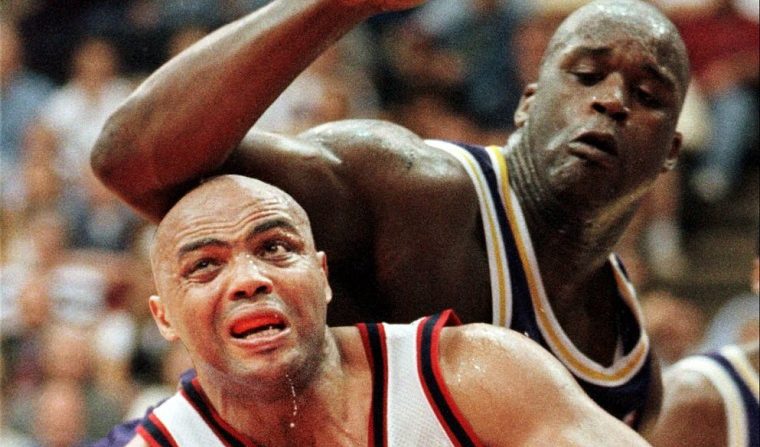 Since 2012, Shaquille O’Neal and Charles Barkley have been coworkers on Turner Sports’ Inside The NBA, and they’ve had some on-set disagreements. But those haven’t escalated into a physical fight, unlike what happened between the two when Barkley’s Houston Rockets faced Shaq’s Los Angeles Lakers in a November 10, 1999 game.

Brandon “Scoop B” Robinson spoke to Barkley about that in a Scoop B Radio clip published Sunday, which also includes the footage of Shaq riling up Barkley, Barkley throwing the ball at his head and Shaq responding with a punch:

Barkley plays down the seriousness of that fight in his comments to Robinson, though, commenting that he didn’t say anything to Shaq before the fight started, and that it wasn’t all that much of a fight.

“I also didn’t think that was going to turn into a fight. But first of all, it was an NBA fight, so we fought like girls and it didn’t last very long. But I wasn’t going to let him embarrass me in front of 18,000 people. So you have to fight at some point, but I’m glad nobody got hurt because he’s a great friend and I enjoy working with him.”

In a Basketball Society article on this, Robinson also found some quotes from O’Neal from back around the fight:

“He was doing all that wild monkey [stuff], throwing [elbows], acting crazy,” O’Neal said back then.

“I think that was a tactic to get me out of the game, and it worked. I’ll probably have to be a little smarter next time, just wait to get him back later.”

It’s funny to see that clip and hear those comments in the context of the two being studio colleagues for so long now. And their arguments now tend to be a little less physical, even if Barkley did threaten to “throw one of these chicken wings at your fat ass” back in 2017 (after Shaq threatened to punch him in the face, so the throw/punch relationship’s still defined the same way!). But hey, it’s a good thing their NBA fights don’t turn physical any more. You wouldn’t want the NBA on TNT set to have to deal with “a po-lice presence.”