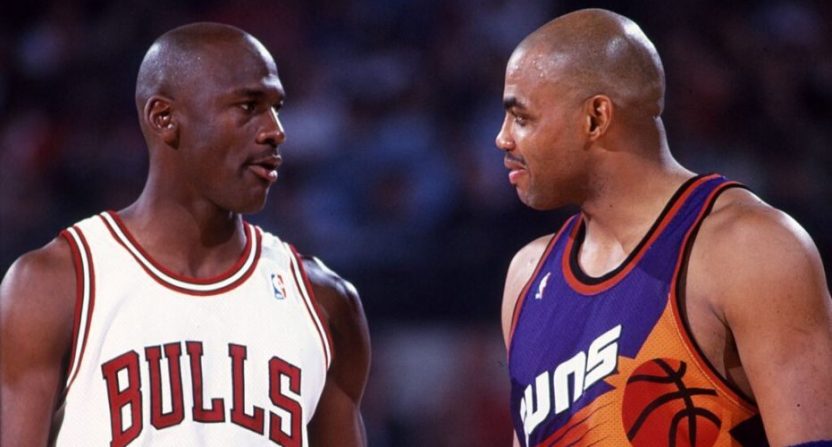 As Jordan mentioned in the documentary, he was miffed that Barkley was voted the league’s Most Valuable Player that season. Jordan actually finished third in voting behind Barkley and Hakeem Olajuwon despite averaging 32.6 points per game. But in his first season with the Suns after being traded from the Philadelphia 76ers, Barkley led Phoenix to the NBA’s best record at 62-20.

Yet if there was any debate as to who the NBA’s best player was at that time, Jordan got the final word by leading his team over Barkley’s in the Finals. This was nearly one year after the two were teammates on the U.S. Olympic Men’s Basketball team, the “Dream Team” that dominated the 1992 Summer Games as the greatest assemblage of athletic talent ever seen on one squad. The two developed a friendship long before playing together that summer.

However, that friendship fell apart years ago when Barkley criticized Jordan’s performance as the Charlotte Hornets (then Bobcats) owner. To that point, Charlotte had finished in fourth and fifth place during the two seasons after Jordan had taken over ownership of the team.

During a Tuesday appearance on ESPN 1000’s “The Waddle and Silvy Show” in Chicago, Barkley lamented the falling out between him and Jordan.

“The guy was like a brother to me for, shoot, 20-something years,” Barkley said (via ESPN’s Nick Friedell). “At least 20-something years. And I do, I feel sadness. But to me, he’s still the greatest basketball player ever. I wish him nothing but the best. But there’s nothing I can do about it, brother.”

During Sunday’s showing of The Last Dance‘s episodes 5 and 6, some on social media wondered if Barkley would be interviewed about playing Jordan in the 1993 NBA Finals because of that rift. Would Sir Charles be frozen out of the documentary, despite his role in a part of Jordan’s championship dynasty?

But Barkley did indeed appear, recalling that matchup from his point of view. Whether or not Jordan expressly or passively approved, he didn’t prevent Barkley from contributing to this telling of NBA and sports history. If anything, Barkley explaining what a great season he had made Jordan’s achievements look even better.

What did Barkley say that essentially made him dead to Jordan? Appearing on the very same “Waddle and Silvy Show” in 2012, Barkley said Jordan had surrounded himself with yes men who wouldn’t push back regarding personnel decisions.

“I think the biggest problem has been I don’t know if he has hired enough people around him who he will listen to,” Barkley said then.

As we’ve seen throughout The Last Dance, Jordan is a vindictive personality and will hold a grudge against anyone who has slighted or opposed him. Once Barkley publicly ripped him — in the city where Jordan achieved his basketball greatness — their friendship was over.

Barkley defended his remarks, saying that he was doing his job as a broadcaster and analyst to point out Jordan’s obvious shortcomings as a team owner. That candor, showing no fear of repercussions, is what makes him such a compelling quote on TV and radio, and in print.

But that honesty clearly damaged his friendship with Jordan, whose sensitivity to criticism is surprisingly high considering his achievements. That touchiness may have made Jordan an all-time basketball great, but how much have his off-court relationships with others suffered because of it?