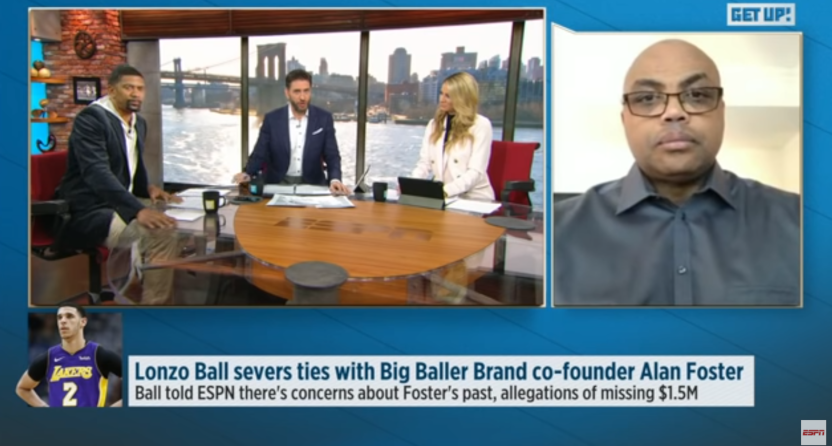 There’s been a significant amount of discussion this week of Ramona Shelburne’s ESPN story on Lonzo Ball parting ways with Big Baller Brand over a rift with co-founder Alan Foster (previously seen on this site when he tried to go after Jeff Goodman, then of ESPN and now of The Athletic). That rift includes accusations of a missing $1.5 million and questions about Foster’s non-disclosure of his past time in prison for mail fraud and money laundering, and that led to Lonzo even getting a new tattoo to cover up his tattoo of the Big Baller Brand logo.

That discussion continued in an interesting way Wednesday, when ESPN’s Get Up had Turner analyst Charles Barkley on to talk the NCAA Tournament, the NBA and more. The most notable part of their Barkley interview came about three minutes in, when co-host Jalen Rose asked Barkley about Lonzo leaving Big Baller Brand, and Barkley responded with strong criticisms of Lonzo’s father LaVar:

Rose asked  “What do you think of the fallout of the Big Baller Brand and Lonzo saying now it’s time for him to be his own man?”, and Barkley responded “Well, he should have been his own man from the beginning, Jalen. You can’t let your family members try to piggyback on your success. This is his time, he’s a nice kid, he’s a good player. I’d like to see him healthy. But this thing has been a disaster since Day 1. It was never going to work. And I feel bad, because this ol’ big mouth jackass dad has put his kids in an awkward situation all year. I don’t want to see anything bad happen to the kid, but I don’t like his dad at all, and this thing has been a joke from the beginning.”

Co-host Mike Greenberg then asks about “what it does going forward”: “There were a lot of people who looked at this and thought maybe someone needed to blaze this trail. Does it feel now like maybe the wrong people did it and it might discourage people from trying this in the future?” Barkley responded “It’s not going to work because they don’t want to pay anybody. They want to make money. They want people to wear their shoes and they make all the money. People can say all they want to about Nike and adidas and Reebok, they actually pay us to wear their shoes. You know, we all became multimillionaires. Nike has paid me millions and millions and millions of dollars a year to wear their shoes. If Nike came to me and said ‘Hey, we’ll give you shoes, and we’re going to take all the money,’ that doesn’t sound like a good business plan to me.”

Barkley’s commentary here obviously comes with some disclaimers; his Nike endorsements (which he mentions) mean he probably isn’t big on upstart shoe companies, and he’s been known for plenty of outspoken commentary himself. But he makes valid points about the situation that LaVar has contributed to (with the aforementioned ESPN piece mentioning that the missing money was first flagged this fall, and that LaVar didn’t “fully review” the documents in question until this week because he was too busy with his younger sons’ overseas travels. (And those are just their latest travels; they previously tried to play professionally in Lithuania, which was predicted to not end well and which did not, in fact, end well).

It’s interesting to see Barkley go in on LaVar in such strong terms, but he’s not wrong about how LaVar has “put his kids in an awkward situation all year.” That’s been a problem for all of them; Lonzo was the second-overall pick in 2017 and has shown some promise with the Lakers, but there’s very little discussion of him on his merits, with most of it just circling back to his father. Meanwhile, LiAngelo Ball wound up getting way more attention than anyone else involved in the China shoplifting incident thanks to his father’s bluster, which included CNN and Today appearances and feuds with President Trump, and led to NBA teams’ interest in him dropping even below its already-low levels. And LaMelo Ball may still be a hot college prospect, but his overbearing father may give some schools pause.

It’s not just LaVar’s fault for being dumb, or Lonzo’s fault for enabling him, though. A big part of the issues here came from the giant platform that ESPN and Fox kept giving LaVar, even when he possessed no actual insight or relevance beyond “being Lonzo Ball’s dad.” And that led to further platforms for him, including the family’s Facebook show. The ESPN discussion of LaVar got so bad at one point that Stan Van Gundy (then the head coach of the Detroit Pistons) took things way too far in response and threatened an ESPN boycott over it. Barkley’s quite right that “This thing has been a joke since the beginning,” and a lot of that’s on the media who first gave LaVar a platform to spout nonsense and then continued to invite him on to spout further nonsense. Maybe more media outlets should have had the Barkley approach of “It was never going to work” from the start, rather than just credulously printing LaVar’s claims and giving him airtime to try and sell his shoes.