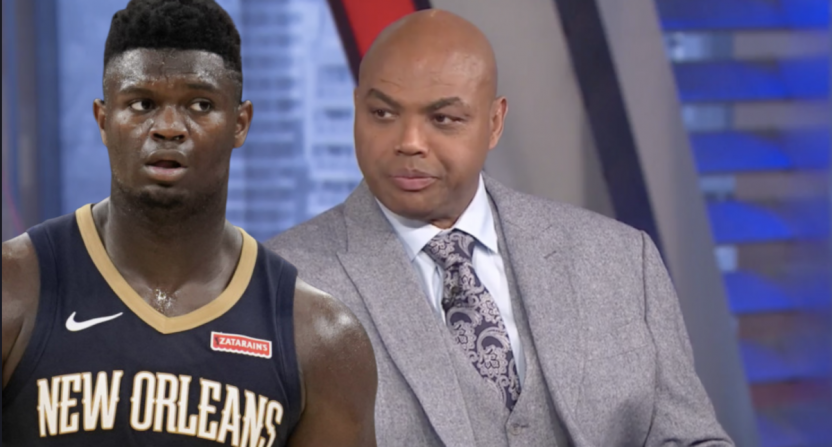 Less than 10 games into the 2021-22 season, one of the prevailing storylines has been the physical condition of Zion Williamson. The New Orleans Pelicans star has yet to play a game this season, recovering from offseason surgery on his right foot. On Monday, the latest timeline had the 2019 NBA Draft’s No. 1 overall pick two to three weeks away from being able to fully practice.

However, the primary concern with Williamson is that he hasn’t been able to maintain his conditioning because of his foot injury and has put on significant weight. As Bleacher Report’s Jake Fischer reported, the setback in Williamson’s rehabilitation and concerns about his weight (reportedly exceeding 300 pounds) could affect negotiations for a contract extension.

The Pelicans, who currently have the Western Conference’s worst record at 1-7, were featured on TNT Tuesday night against the Phoenix Suns. (New Orleans eventually lost, 112-100.) That provided an opportunity for the Inside the NBA crew to comment (weigh in?) on the Williamson situation and the uncertainty his conditioning places on his future.

As Williamson was shown going through pregame workouts, looking far from playing shape, Charles Barkley and Shaquille O’Neal shared their thoughts on the matter:

“It looks like me and Shaq had a baby,” cracked Barkley.

Funny line, especially to Shaq, but Barkley — who struggled with weight issues throughout his career, earning nicknames like “The Round Mound of Rebound” — got a bit more serious from there.

“I’m concerned. I’m really concerned,” said Barkley, recounting his early days with the Philadelphia 76ers. “I tell this story, and I’m being critical. It is what it is. Moses Malone said to me, he said I was fat and lazy. And I started to cry a little bit… and it was a turning point in my career.”

Malone and Barkley were teammates for two seasons (1984-85 and 1985-86) and that influence during his formative years in the NBA apparently helped spur him to become one of the league’s all-time best players and an eventual Hall of Famer. Is there anyone currently on the Pelicans’ roster who can give Williamson the “tough love” and veteran advice he needs?

Barkley went on to point out Williamson’s problems with injuries early in his career, saying “You should not get hurt when you’re young.” It’s a criticism the Hall of Famer has made toward Los Angeles Lakers star Anthony Davis, as well. Whether it’s changing his training habits or needing a mentor figure to set him straight, Williamson can’t continue like this.

“Somebody’s got to be a grown person down in that relationship and say, ‘Man, you got to get in shape,'” much like the veteran Moses Malone told a young Charles Barkley. Barkley speculated that Pelicans coaches and management might be hesitant to be stern with the star for fear he’ll leave as a free agent.

Barkley has been criticized in recent years for being too hard on young stars like Kevin Durant, James Harden, Paul George, Kyrie Irving, and Donovan Mitchell. Some of that criticism has been unfair, especially toward players like Mitchell who are clearly superstars. But players are as media-savvy and media-aware as they’ve ever been, so perhaps it shouldn’t be a surprise that they’re sensitive to criticism, as a result.

Yet no one is likely to take issue with what Barkley said about Williamson, especially when he attached his own personal experience to it. This wasn’t just “things were better in my day” grumbling from a former NBA star. Not every analyst and commentator is going to be as forthright as Barkley, which is what makes him such a compelling and popular TV personality.

If these issues continue with Williamson and he’s unable to return to the court and play at an elite level, it’s surely a topic Barkley and his Inside the NBA colleagues will revisit. And it should be worth watching.