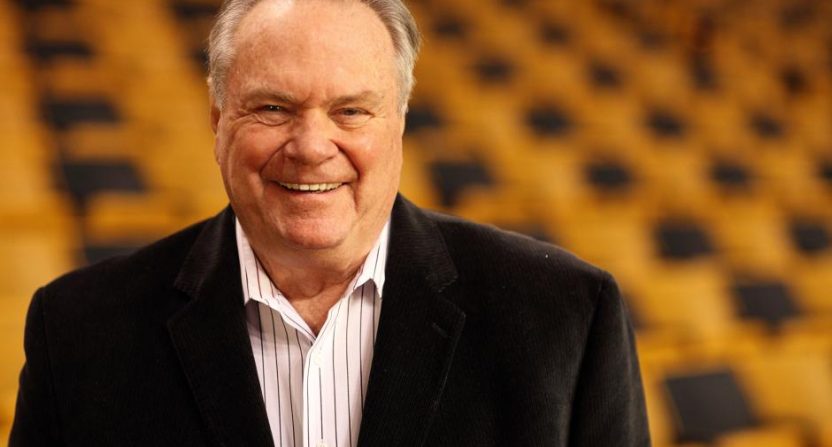 Tom Heinsohn, the Basketball Hall of Famer who was a Boston Celtics legend as a player, coach, and broadcaster, has passed away at 86, per the Boston Globe.

Heinsohn played nine years in the NBA, all with the Celtics, and won NBA titles in eight of those nine seasons. Following his retirement as a player, he became the Celtics play by play broadcaster in 1966 for three seasons. He then took over as the team’s head coach in 1969 and won two more titles in nine seasons. He transitioned back to the broadcast booth, and worked Celtics games with Mike Gorman since 1981. Additionally, Heinsohn called national NBA games for CBS in the 1980s, calling four NBA Finals with Dick Stockton. During his time at CBS, Heinsohn also worked alongside James Brown, Verne Lundquist, and Brent Musburger.

He was elected to the Basketball Hall of Fame twice, in 1986 as a player and in 2015 as a coach. In recent years, his workload on NBC Sports Boston has been cut back, with Brian Scalabrine working with Gorman on road games.

Gorman tweeted out a brief remembrance of Heinsohn on Tuesday, as did the Celtics.

We take this time to celebrate Tommy Heinsohn’s life and legacy, and to share in the sorrow of his passing with his family, friends, and fans. As long as there are the Boston Celtics, Tommy’s spirit will remain alive.

Roughly 2800 times I sat down with Tommy to broadcast a game. Every time it was special. HOF player…HOF coach…HOF partner. Celtics Nation has lost its finest voice. Rest In Peace my friend. It has been the privilege of my professional life to be the Mike in Mike & Tommy.

Heinsohn was a true icon in Boston and across the basketball world, and he’ll be missed.