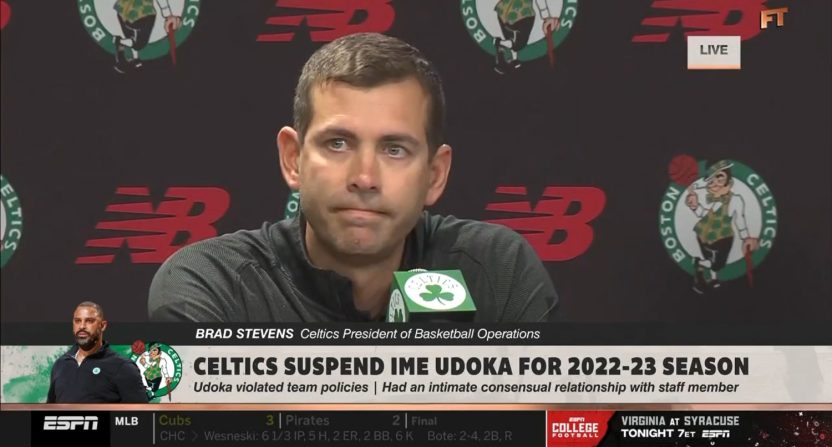 After the Boston Celtics stunned the sports world by handing head coach Ime Udoka a one-year suspension, the organization held a press conference to address the matter Friday morning.

Udoka’s suspension stems from the head coach reportedly engaging in an intimate consensual relationship with a female team staff member, which has prompted widespread social media speculation as people seek further details. During the presser, which offered little clarity, former Celtics head coach and current team president Brad Stevens became emotional as he addressed the rampant speculation and attempted to defend the organization’s female staff members from those rumors.

“A lot of people were dragged into that unfairly.”

Celtics President of Basketball Operations Brad Stevens had some strong feelings about the female staffers being dragged into the social media conversation. pic.twitter.com/Q2IvR7VGeZ

“We have a lot of talented women in our organization, and I thought yesterday was really hard on them,” Stevens said as he began to get choked up. “Nobody can control Twitter speculation and rampant bullshit, but I do think that we as an organization have a responsibility to make sure we’re there to support them now because a lot of people were dragged unfairly into that.”

During the press conference, the Celtics denied leaking any details about Udoka’s suspension to the media. But after the reason for Udoka’s suspension was reported, a chunk of Twitter became enamored with speculating on who was involved in the romantic relationship by grossly naming and sharing images of various female employees within the Celtics organization.

“That was really unfair in my opinion and I don’t know how we control Twitter,” Stevens added. “Obviously there’s only so much we can say. But our job is to support and our job is to be there as everybody goes through the hard time. And everybody digests this stuff differently, but yesterday was unfair to them.”

Following the initial report surrounding Udoka’s suspension, there have been endless amounts of bad hot takes and coverage as people attempt to judge the season-long punishment without having enough information to accurately do so. But victimizing women in the Celtics organization is the most egregious aspect of the widespread speculation and rumors that are being attached to this story.