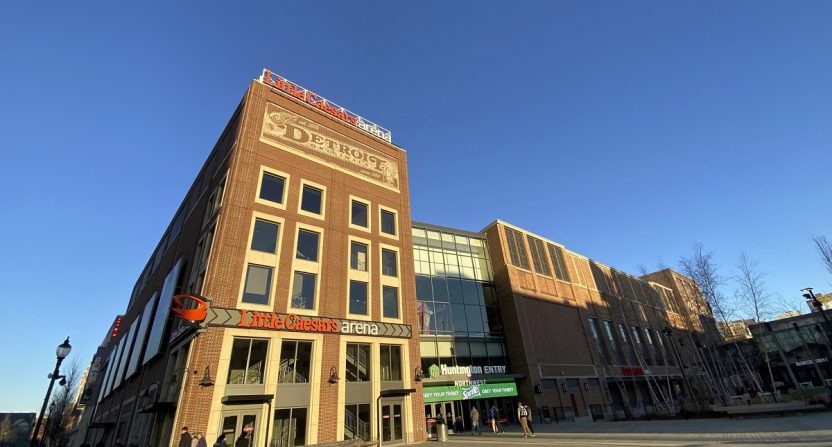 A camera operator who worked the Jazz-Pistons game on March 7th is in a medically-induced coma as part of a battle against COVID-19. That game featured Rudy Gobert, who tested positive for the coronavirus just days later, leading to the NBA suspending the season.

According to the report from Yahoo’s Vincent Goodwill and Dan Wetzel, the unnamed cameraman was placed into the coma in an effort to stabilize his oxygen levels.

A camera operator who shot footage inside the Utah Jazz locker room after a March 7 game in Detroit is in a medically induced coma after being diagnosed with COVID-19, his friends said.

The man, who is in his 50s, has worked for years as part of broadcast crews for NBA games at Little Caesars Arena, according to friends. That included the Jazz-Pistons contest where part of his assignment, according to coworkers, was filming postgame locker-room interviews for the broadcast feed that went back to Utah.

Yahoo Sports is not naming the man due to privacy concerns. It is unknown where, when or how the man contracted the coronavirus. According to a friend, he began feeling ill about a week after the game. When home remedies didn’t work, he reported to a suburban area hospital on March 18.

That last part is key, as obviously there’s no way to know whether he contracted the disease directly from his job duties, though obviously he was likely exposed, especially filming in the locker room.

The quick descent from “not feeling well” to “medically-induced coma” sounds incredibly harrowing:

“He sent me a text saying, ‘Oh [expletive], they put me in an exam room with masks,’” friend Grov Tigue told Yahoo Sports. “At 11:11, he sent another one saying, ‘They say my oxygen level is low. They want to get it to a higher level.’ But he didn’t have a diagnosis yet.

“Thursday I texted him about the [Darius] Slay trade [involving the Detroit Lions] and he replied at 1:18 on Thursday, ‘Still in the hospital,’” Tigue said. “Saturday I hit him at 6:47 a.m. Then he replied at 3:48 p.m. He said, ‘I’ll be out of touch for a day or so.’ Then I found out they were putting him into a coma.

“[Doctors] couldn’t get his oxygen levels right. They pulled him out of the coma yesterday but put him back in,” Tigue said.

Hopefully he makes a full recovery, and if he’s a contractor for Fox Sports Detroit, hopefully Sinclair actually takes care of him, too.