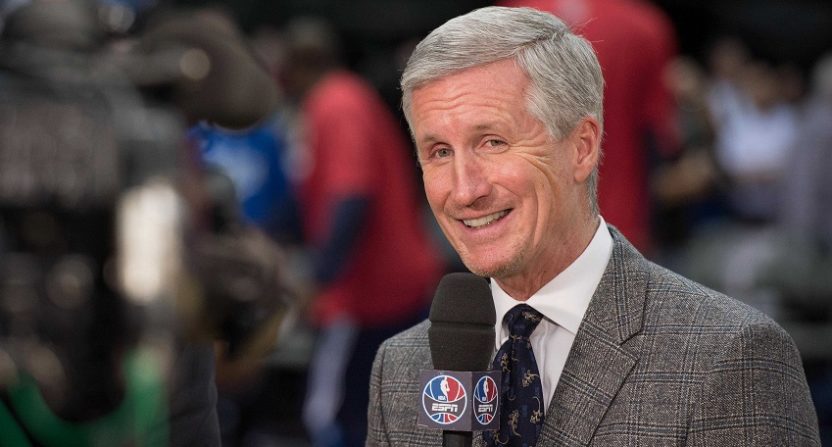 Mike Breen does not consider himself to be the voice of the NBA.

The ABC and ESPN broadcaster unquestionably gives that title to the great Marv Albert, who Breen grew up listening to in the New York City area, first in Yonkers and then in college at Fordham. But no broadcaster— not Albert, not Bob Costas, not Brent Musburger, Al Michaels or Dick Stockton— has called more NBA Finals than Breen.

Beginning Thursday night in Oakland, Breen will call his 12th Finals in a row for ABC as the Cleveland Cavaliers and Golden State Warriors clash for an unprecedented third straight time. In a conversation with Awful Announcing, Breen spoke about The Finals, his career and — whether he likes it or not — being the voice many young basketball fans will associate with this generation’s brightest stars. 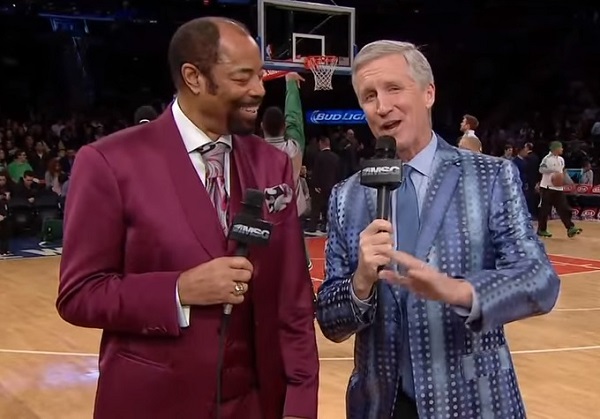 Breen, 56, has broadcast over two decades of NBA games, primarily with the New York Knicks, but his ascent to ABC’s top job has coincidentally coincided with LeBron James’ rise to superstardom. James will be participating in his eighth NBA Finals, all of which will have been called by Breen. And just like Albert called some of the greatest and most seminal moments of Michael Jordan’s career, Breen’s voice will forever be associated with LeBron’s most memorable feats and accomplishments.

“I’m one of so many play-by-play guys who idolized Marv, and he has always been and always will be the greatest basketball play-by-play voice of all time,” Breen said. “And he’s still the voice of the NBA to me. So it’s hard for me to comprehend that stuff.”

Breen said that more and more people are coming up to him these days and telling him that they grew up listening to his calls, like Breen used to listen to his idols growing up.

“I know that’s the ultimate sign of age,” Breen said. “And that always cracks me up.”

The entire ABC crew calling this year’s Finals has enjoyed a longevity together seen by very few sports broadcasting groups. Jeff Van Gundy will be analyzing The Finals for a record 11th time and Mark Jackson and Doris Burke will be alongside Breen and Van Gundy for an eighth straight season.

“When somebody asks ‘What’s the best part about doing The Finals,’ the best part is calling the games with the three of them,” Breen said. “We’ve all known each other, pretty much, for 25 years.”

Breen called games on Knicks radio when Van Gundy was an assistant coach under Pat Riley and Jackson played for New York. At around that same time, Breen started announcing Big East men’s basketball games with Burke as analyst. 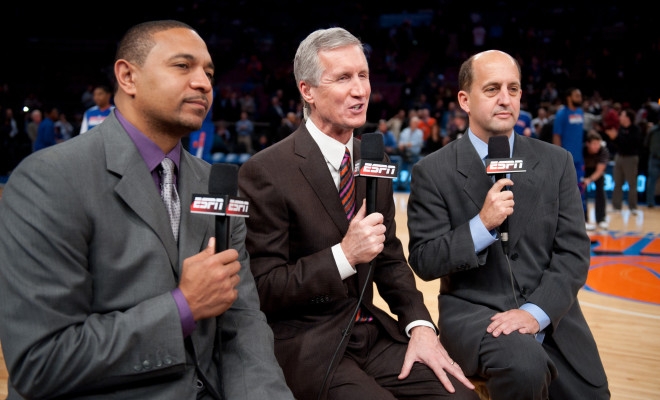 “The most underrated part of our business when you’re on air with partners having that kind of chemistry, and especially over a long period of time,” Breen said. “We’ve watched each other’s kids grow up, now we’re congratulating each other with kids’ college graduations. And to have that kind of comfort level with people when you’re on the air is as good as it gets.”

Breen’s run with Van Gundy and Jackson is especially unique in coaching, where broadcasting is often seen as a rest stop between jobs for coaching stalwarts past and present like Steve Kerr, Doug Collins and Doc Rivers.

“I hold my breath every summer, because Jeff and Mark were terrific NBA coaches and to this day, I’m still shocked that nobody’s hired either one of them,” Breen said. “And selfishly, when the summer comes to an end and they’re not back in coaching and coming back to the broadcast booth, I’m thrilled, selfishly.”

Few broadcasters have witnessed James’ evolution over the course of his career more closely than Breen, who’s been fascinated by LeBron’s journey to become one of the game’s all-time greats.

“When he first came in, he was obviously a special talent,” Breen said. “And the question wasn’t ‘Will he win a title,’ it would be ‘How many titles will he win?’”

That first championship series James made in 2006-07, just Breen’s second year calling The Finals, was one of his most incredible accomplishments just because LeBron had such relatively limited talent around him, Breen said. Breen saw firsthand how James left Cleveland for Miami and instantly became this villainous figure in basketball, and how that slowly dissipated after he won his two championships with the Heat.

“I do think as he’s grown as a player, and I think anyone who’s a real basketball fan sees what he’s about. And he’s all about winning, and has always been all about winning,” Breen said. “He’ll be in the conversation as one of the greatest to ever play the game. And a big part of it is because he’s always been a team-first guy.”

While James’ team was lacking in talent a decade ago, Cleveland will look to repeat as NBA champion — becoming the first team to overcome a 3-1 series deficit in The Finals — with a group that stormed through the Eastern Conference playoffs, winning 12 of its 13 games. The Cavs’ opponent for the third straight year will be Golden State, which became the first team in league history to win its first 12 postseason games, after adding Kevin Durant in the offseason to an already loaded team that won 73 regular season games just last season.

“You have one of the great offensive teams that we’ve seen in the NBA over the past several decades, and now you add one of the great offensive players in the history of the NBA joining them,” Breen said. “Meanwhile Cleveland, for them to once again be the underdogs, and they pulled off this phenomenal comeback last year, they’re gonna come in as the underdogs here, but they have the best player in the game. So how do they handle that?”

This series will feature three past league MVPs, James, Durant and Stephen Curry, and 11 current or former All-Stars, the most in a Finals since 1983. And despite having seen these two teams so many times over the past couple of years, Breen will still do his regular preparation for this series like he would any other, with a specific focus on box scores and notes from the last two Finals. Even if it doesn’t make it on the air, Breen will be ready for various specific matchups and in-game strategy decisions that could give either Cleveland or Golden State even the slightest edge.

But the individual matchup Breen is most looking forward to is the point guard battle between Curry and Kyrie Irving.

“These are two unguardable players when they’re at their peak, and this year for the first time for both of them in The Finals, they’re both healthy,” Breen said. Irving injured his knee in Game 1 of the 2015 Finals and Curry was hurt during last year’s playoffs. “Both [are] playing on an incredible level, to see them go at each other, I think for me is the most intriguing matchup I can’t wait to watch.”

And whether he sees himself as the most distinguished basketball voice of the LeBron James Era or not, Breen will be there calling yet another James-headlined Finals, as he stars in one of the great budding super-rivalries in NBA history.