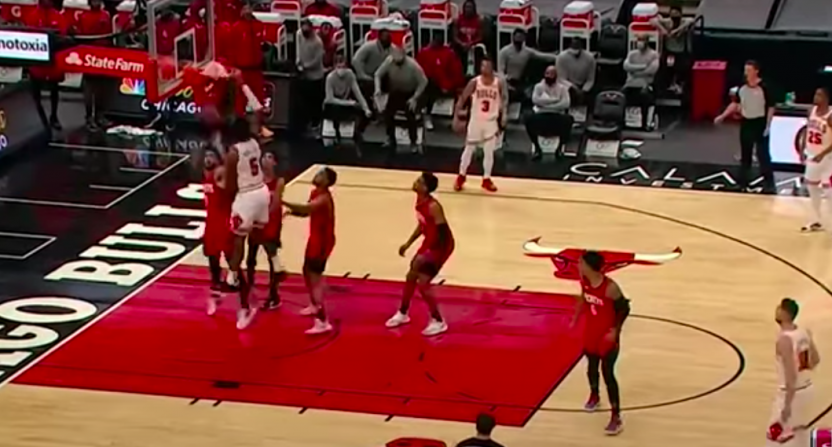 The NBA season is (weirdly) fast approaching and preseason play is underway this week. Many of the players are a little rusty and still trying to work out what they’re doing. And clearly, so are some of the play-by-play folks as well.

On Friday, the Houston Rockets defeated the Chicago Bulls, 124-104, in the preseason opener for both squads. It was a fairly normal and unmemorable preseason affair, that is, except for one moment that made viewers do a bit of a double-take to confirm they’d just heard that they thought they’d heard.

That’s certainly not something you usually hear on an NBA broadcast. Or any pro sports broadcast, as it were. And as you might imagine, Twitter noticed and had some thoughts.

Noah Vonleh dunked on someone and Stacey King’s reaction was yelling “open your mouth wide and take it” on national TV. pic.twitter.com/zrlSktviwq

King is no stranger to memorable dunk calls. From the time Zach LaVine threw down an epic dunk after returning from ACL surgery to his “Does anybody know how to post videos on Facebook” call, King has a good understanding of how to punctuate big dunks with big responses, even if this most recent one raises some eyebrows.

Easily the best call of a dunk this year by Stacey King pic.twitter.com/PfxAkLWCGs

We look forward to hearing what else King (and new broadcasting bussy Adam Amin) has in store for the season ahead as they’re likely to be many more Vonleh dunks to come.