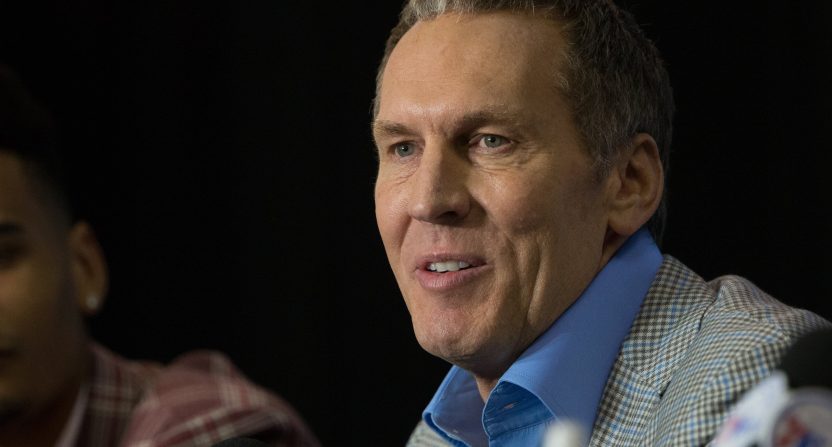 It’s always remarkable watching sports figures try to rewrite history so it’s more favorable to them. That was at the center of the discussion of the anonymous Twitter and website commenting accounts linked to then-Philadelphia 76ers president of basketball operations Bryan Colangelo in 2018, a discussion that started with an investigation from Ben Detrick at The Ringer and went through cycles of reporting, an internal investigation, and Colangelo’s eventual resignation. And now, Colangelo (seen above in 2016) is trying to rewrite the history of that linked-to-him attempt to rewrite history.

Colangelo recently bought an ownership share in an Australian team, the Illawarra Hawks. In a media interview around that, he told Sam Phillips of the Sydney Morning Herald that he was “absolved” in the situation in Philadelphia and that “I felt the appropriate thing to do – in conjunction with ownership there in Philly – was to mutually walk away.”  But a closer look at the situation raises questions about that interpretation of the story. First, though, here’s the fuller quote from that Morning Herald piece:

“I haven’t addressed it very much over the course of the last two years. I have stayed very much under the radar on the topic because it’s a sensitive topic, for a lot of reasons,” Colangelo said.

“Family, personal, professional, or otherwise. I have to say I was dealt a pretty big blow, personally and professionally. And it’s been a difficult time dealing with the fallout. I was completely blindsided by the accusation and the storyline of the controversy.”

“Once that investigation was completed and I was absolved, I felt the appropriate thing to do – in conjunction with ownership there in Philly – was to mutually walk away.”

Look, yes, those anonymous Twitter accounts were silly on many levels, especially as a way to try and influence public opinion about Colangelo. Anonymous tweets from the likes of “@AlSmith40117560” weren’t likely to ever have a big impact there. But they spoke of a desire to change how Colangelo was perceived, and they were particularly concerning for their revelations of players’ private medical data. And that was a large part of what led to pressure building to a point where Colangelo resigned. And the “mutually walk away” thing is a very nice phrasing of that, as most NBA observers were convinced the Sixers couldn’t keep him on after that.

And while Colangelo disavowed direct involvement with those accounts and said they were run by his wife Barbara Bottini without his knowledge (and she told investigators she operated the accounts), he was never “absolved” of connections to those accounts. Yes, the official Paul, Weiss investigation concluded “As a result of our investigation, we do not believe that Mr. Colangelo established the Twitter accounts or posted content on those accounts.” But that conclusion comes with some pretty significant disclaimers.

The Paul, Weiss report goes on to say “We cannot conclude that Mr. Colangelo was aware of the Twitter accounts prior to the May 22 press inquiry,” and says they didn’t find forensic evidence to refute his denials there. But it adds “We note, however, that our investigation was limited and impeded by certain actions taken by Ms. Bottini, including her decision to delete the contents of her iPhone by executing a factory reset of the device prior to surrendering it for forensic review.”

And the Paul, Weiss investigation also adds that there was “substantial evidence” that Colangelo was “the source of sensitive, non-public, club-related information contained in certain posts to the Twitter accounts.” And it says “We believe Mr. Colangelo was careless and in some instances reckless in failing to properly safeguard sensitive, non-public, club-related information in communications with individuals outside the 76ers organization.” That is far from absolution.

Is it possible that Colangelo had no involvement himself in sending those tweets? Sure. After all, that’s what the investigation wrote that they believed. But that’s an investigation that wound up going off Colangelo’s denials and his wife’s confession, and that didn’t wind up having the necessary forensic information for a data-based conclusion thanks to Bottini’s decision to scrub her phone. So he certainly wasn’t “absolved” of putting that information out there himself. And he definitely wasn’t “absolved” overall; even the official investigation, while not concluding that he sent the tweets, found him “careless and in some instances reckless” with how he safeguarded sensitive information.

Of course, Colangelo has already seen some significant consequences here. He hasn’t worked in the NBA since this scandal, and it’s not necessarily particularly objectionable to see him get a chance to be involved in Australian basketball. But it would be easier to support his comeback attempts if he would address what actually happened in Philadelphia rather than pretending he was “absolved.” At the very best, he was “careless and in some instances reckless” in divulging sensitive information about players to someone who chose to broadcast it to the internet in an attempt to make him look good, even if he wasn’t specifically involved in that broadcasting. And again, Colangelo was not “absolved” of involvement there either; without the conveniently-deleted forensic data, the investigators wound up with his word and his wife’s word, and while they concluded that they didn’t believe he sent the tweets himself, that’s not proven, and it’s not absolution.

None of that necessarily means that Colangelo shouldn’t play a role in running a NBL team. If the people he’s working with trust that he’ll be an asset, more power to them. He’s certainly shown some prowess at identifying talent and creating strong organizations over the years. But it would be nice to see him address this past situation in terms of more than just “I was absolved,” which isn’t really accurate. And it would certainly be easier for those he’s now working with to trust that he won’t release sensitive information again if he’d actually taken some ownership of that past release of sensitive information.