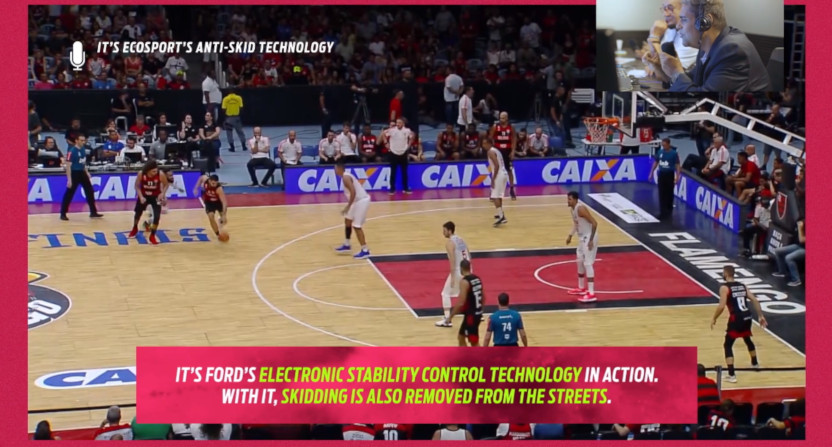 Shoe squeaking is something that is largely unique and scientifically essential to the game of basketball. While the high pitched noises may fade into the background and form part of the soundtrack to the game for some, they drive others slightly crazy. It’s one of those things that if you’re not listening for it and paying attention to it, you probably don’t even notice. But if you do hear it, especially for a casual fan while trying to watch a game from the comfort of home, you can’t escape.

But what if you could watch a game without hearing all those squeaky sneakers? Apparently, the technology exists. And it’s already being put into practice, at least in a few Brazilian broadcasts.

Via The Drum comes a fascinating report about a Brazilian Basketball League broadcast that was able to remove the squeaks, but for quite the strange reason. Apparently, it was all part of a marketing gimmick from Ford Brazil to promote the manufacturer’s “Electronic Stability Control” technology. The noises were turned off for a minute each period while announcers sold cars. Talk about product placement…

Every basketball fan knows that shoes squeaking on the court is just a part of the game. The sound is linked to the sport, especially on televised games. Ford decided that taking away that sound would bring some attention to the auto maker’s EcoSport AdvanceTrac and its Electronic Stability Control technology that helps to prevent skidding on the streets.

So Ford Brazil did just that – it worked with sound engineers to remove the shoe squeaks from the NBB (the Brazilian Basketball League) finals. It removed sneakers squeaking on the court during one minute of every period, so every time the sound was off, the game announcer talked about the car and the no-sound experience, while an on-screen banner showed the car, its price and the site where people could read more about the technology.

The crossover SUV sponsored the entire basketball season on Fox Sports and ESPN and ended the partnership with that unique brand experience.

You can see what the broadcast looks and sounds like here:

Now that this technology exists, it could be something that American broadcasters might look into for future basketball telecasts. After watching the video of the Brazilian broadcast, it certainly sounds different. And as someone who’s watched thousands of games of basketball over the years, it sounds quiet. Maybe even a little too quiet.

Would no squeaks make the game more accessible to casual fans, or would it anger hardcore fans who would feel as though it would betray the soul of basketball to artificially alter the sounds of the game? We don’t really know at this point. But it may be at least an idea worth experimenting with. (Just the sound technology part, not the turning a minute of each quarter into a Ford commercial part.)