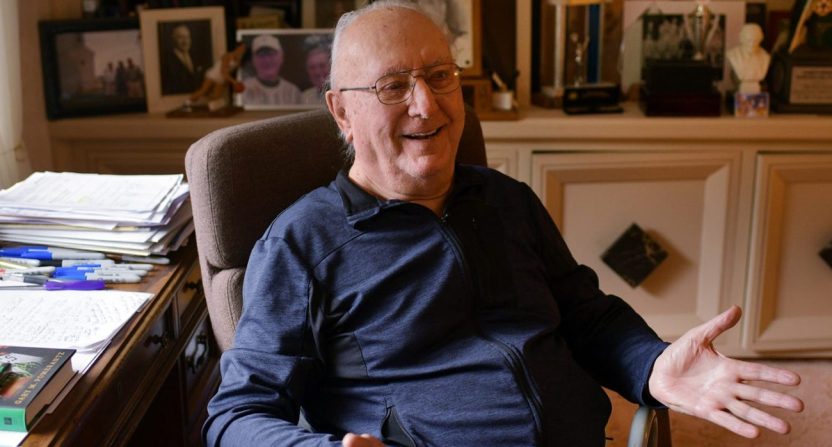 With Chris “Mad Dog” Russo joining Stephen A. Smith on First Take every Wednesday, viewers are regularly treated to sports history lessons. There’s nothing Russo loves more than arguing about and defending Hall-of-Famers who are being buried in the history and stat books by modern athletes.

That was on full display last month, when Russo got heated with Redick, arguing against Chris Paul being an all-time great point guard like Bob Cousy whose prime was in the 1950s.

“Well, he was being guarded by plumbers and firemen” – JJ Redick

“He was being guarded by plumbers and firemen,” Redick argued of Cousy on the Apr. 20 episode of First Take. It seemed like the end of the argument, until Cousy was asked about Redick’s comment when he joined SiriusXM NBA Radio with Justin Termine and Eddie Johnson.

Cousy offered a strong response, but he was less concerned about touting his own credentials and more focused on defending the players he played with and against.

“People with less talent will always try to make a name for themselves by criticizing other people and hopefully getting some attention and perhaps increasing their credibility,” Cousy said. “So when you respond to something like this, you play into their hands. I won’t do that, but I will defend the firemen and the plumbers that he referenced.

“And I’ll just give you a few of the names of these firemen that I played with and against during those years. How about Bill Russell, the aforementioned, not too bad a player. Wilt Chamberlain, remember that guy? He wasn’t bad. I guess he must have fought fires as well. But in any event, Wilt Chamberlain.”

“I guess [Wilt Chamberlain] must have fought fires as well”

The 93-year-old Cousy is a six-time NBA champion with the bulk of his career spanning from 1950-63. Cousy made a comeback during the 1969-70 season for seven games, serving as player-coach of the Cincinnati Royals.

“Still the best, in my judgment, small forward that ever played the game, a guy named Elgin Baylor,” Cousy continued. “A couple of point guards that weren’t too shabby, my colleague who also had an award created [in his name], guy named Oscar Robertson, who was pound for pound the best player perhaps in the game.

“Jerry West wasn’t too shabby. The guys on our team, Sam and K.C. Jones, a guy named “Hondo” Havlicek wasn’t too bad. Tom Heinsohn, Frank Ramsey, George Mikan, Bob Pettit, I could go on and on. We must have had the best firemen and plumbers on the planet at the time. And I was very proud to play with all of them.”

It’s kind of cool to have an older player respond and defend his generation of basketball. Obviously it’s tough to compare the 1950s NBA with today’s players who have so much more training and resources. But I’ll take Redick rejuvenating some competitive spirit in a 93-year-old Hall-of-Famer.