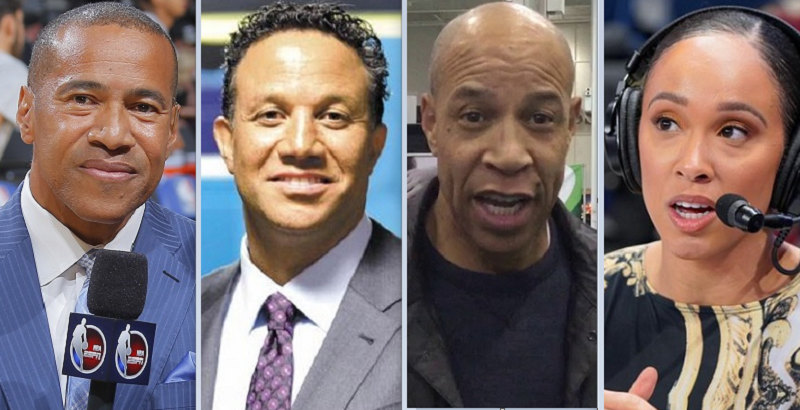 As more attention is drawn to racial inequality throughout society, the lack of BIPOC representation in many aspects of culture is becoming increasingly notable. That certainly applies to media and — for the purposes of this website — sports media. While the majority of athletes competing in football and basketball at the professional and amateur levels are Black, very few broadcasting those games are people of color.

It may surprise you to learn that there is only one Black TV play-by-play broadcaster among current NBA teams: Eric Collins, who calls games for the Charlotte Hornets on Fox Sports South. (Another person of color, Adam Amin, will be the Chicago Bulls’ play-by-play voice beginning next season.) On the radio side, only the Toronto Raptors have a Black broadcaster with play-by-play announcer Paul Jones. And on a national basis, ESPN’s Mark Jones is the only Black broadcaster calling play-by-play.

Even in the WNBA, there is only one Black play-by-play announcer: Meghan McPeak, who calls Washington Mystics broadcasts and Capital City Go-Go games for Monumental Sports Network (with some simulcast on NBC Sports Washington).

Marc J. Spears of The Undefeated talked to each broadcaster about their individual work experiences, how isolating it can feel without other BIPOC colleagues, and obstacles they’ve faced throughout their careers.

“You notice when you’re the only guy of color that is not a former player who is holding a microphone,” Collins told Spears. “So, that’s awkward.”

“Disappointing, upsetting, disgusting,” said McPeak. “When you look at the NBA and the NBA G League and you can count on one hand how many people of color, male or female, are in this role it is laughable.”

As Jones pointed out, the lack of Black broadcasters often means that the experiences of Black players off the court aren’t given attention — certainly not from a relatable viewpoint.

“It’s hard for me to find somebody to bounce uniquely Afrocentric stories off of,” Jones said. “You’re talking about a league that is 75% African American. Who is going to see it through the same prism that I do? Is the producer going to understand me? Is he going to support me? Is my analyst going to support me?”

The 2018 arrest of Milwaukee Bucks guard Sterling Brown is one example Jones cited. Brown’s treatment by police, in which he was tackled to the ground, tased, and handcuffed for a parking violation. That was heavily on the minds of Brown’s teammates when the Bucks played the Brooklyn Nets hours later.

“I wonder whether we have enough people telling stories that are impacting Black players accurately with the same amount of importance. If you did a Milwaukee Bucks game when the police brutality happened and you didn’t talk about Sterling Brown, then you were missing the story. That was a story that was not only important to Sterling Brown, but to his teammates and players around the league who look like him.”

Will the number of Black broadcasters in the NBA grow? That depends on the opportunities made available for young broadcasters, but systemic racism throughout the industry is a considerable barrier to overcome. Though Paul Jones has called games for the Raptors since 1995, he told Spears that he’d been passed over for several other opportunities during that span. Mark Jones was told by TSN he wasn’t ready for a play-by-play role, only to be hired by ESPN and ABC weeks later.

Each of the broadcasters advised aspiring announcers to call whatever they can. Don’t just focus on basketball; show versatility. But as McPeak said, change ultimately needs to happen among those making the decisions for teams and networks.

Spears’ entire Q&A at The Undefeated with Collins, Paul Jones, Mark Jones, and McPeak is worth reading. All four broadcasters share their respective backgrounds and the paths taken to their current positions.