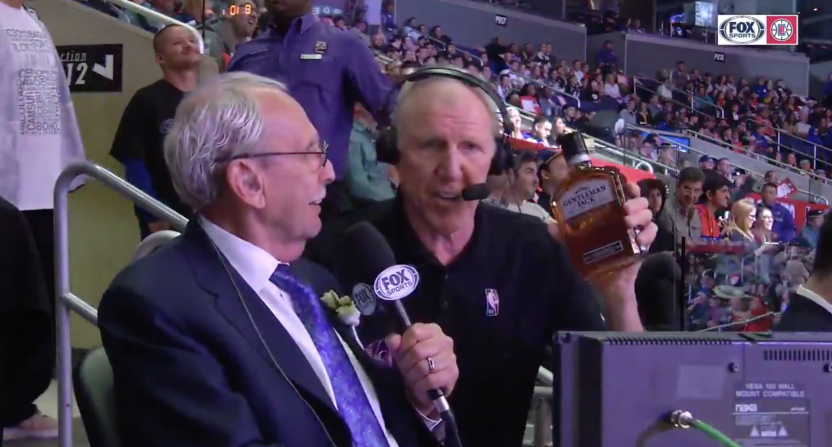 It’s been a while since Bill Walton regularly called NBA games. In recent years, he has been the hilarious thorn in Dave Pasch’s side as they work Pac-12 games for ESPN. The last time Walton did an NBA game was in 2018, when he and Pasch worked a Warriors-Blazers game while the NBA crew worked a college basketball game.

To honor longtime Clippers play-by-play announcer Ralph Lawler in his final regular season game and his 40 years of service, Walton made a rare NBA appearance to reunite with Lawler and work one final game. Lawler and Walton were broadcasting partners for 13 years and Lawler was doing play-by-play when Walton played for the team.

"I'm Bill, and I'm ready to celebrate the greatness of [@Ohmeomy]'s life…"

What we got was classic Walton as two friends worked together one final time. Even in the introduction, Walton was his exuberant self as he celebrated Lawler’s career, including yelling Lawler’s classic “Bingo” call when someone hit a three.

Early on, Walton gave Lawler some nice retirement gifts including an engraved bottle of Jack Daniel’s Gentleman Jack that Walton wanted to break out during the game. In addition, Walton gave Lawler a piece of artwork Walton commissioned on Lawler’s life and career which was titled “The Long, Strange Trip of Ralph Lawler.”

While most of the country got the Jazz-Clippers game on ESPN (ironically, Pasch is working the ESPN broadcast), people in the LA area got a treat as Walton entertained the masses (and annoyed a few) with his nonsensical, but amusing tangents.

Oh goodness, Bill Walton is sitting in with Ralph Lawler to call his last regular season game. The old team is back together. This is going to be fun and ridiculous. ???

Bill Walton just asked if Danilo Gallinari is in the running for the most vowels ever in a name.

Bill Walton and Ralph Lawler are discussing the street on which Ralph was born.

Walton made a pilgrimage there to do some homework on Ralph

Oh me oh my. What a @NBA blessing. @BillWalton and @Ohmeomy on the call again. The greatest announcing team in league history. And straight out the gates we got a Kandi Man reference. pic.twitter.com/1jGZjVWtg2

Walton: "As fine a group of officials as I've ever seen".

Hearing Bill Walton just say “throw it down, big man” next to Ralph just took me wayy back. Clippers nerd moment for sure

Bill Walton refers to Ivica Zubac as "Chewiebaca." He also believes Zubac will be the first Clipper to have his number retired.

“Greg Ostertag one of the pillars of the NBA” – Bill Walton

Bill Walton: “Careless turnover here. Quin Snyder, I can’t believe he has not turned in his resignation in shame with the performance we’re witnessing here from these Utah Jazz.”

'Gobert's not playing? what happened? Did he die? Why, if he has a T in his name, you don't pronounce it?'#ClipperNation

Ralph Lawler, about Tyler Cavanaugh: "He's a Two-Way player. That means he's spent a lot of time playing in the development league"

Bill Walton: "I thought you were talking about his sexual orientation or something."

"Throw it down, big man! … Who's that?" – Bill Walton, on Montrezl Harrell

The things you learn during a Bill Walton broadcast

Bill Walton calling this Clippers / Jazz game is something else. He just said “cmon ref! Go back to footlocker where you belong.” Unreal.

Bill Walton to Ralph Lawler: “How great it is the #Clippers have allowed Jo (Ralph's wife) to come on the road with you. And she stays in the same room as you right?"

Bill Walton is in last game commentary game ever mode, and it's tremendous.

Bill Walton has already worn three different shirts in the first half. pic.twitter.com/k99tyrWCix

Bill Walton said he's had 37 orthopedic operations and at least 25 on his ankle. Man has been through hell.

“Was that Lancaster Gordon?” Bill Walton asks about Lou Williams.

Lancaster Gordon last played for the Clippers in 1988.

Bill Walton just asked Ralph Lawler to give his top 25 Clippers off the top of his head.

"Is that Kyle Korver?" pic.twitter.com/4p5ulHuMvD

one of Ralph Lawler's catchphrases is BINGO

And for Ralph's final broadcast for the Clippers after 40 years, Bill Walton got him a bingo set ?❤️ pic.twitter.com/pwwX2hhV4S

Bill Walton says he wore number 5 because it was one less than Bill Russell, his "all-time hero on and off the court"

I assume Bill Walton is also in charge of the graphics tonight. pic.twitter.com/ZRQGmzcbdg

Not sure Bill totally grasps how retirement works.

Bill Walton is telling a story of when he told Ralph Lawler he could read Spanish but couldn't speak it off the top of his head. Ralph had Bill say "I'm Bill Walton and I resign from Clipper basketball" in Spanish.

After seeing a video of Gregg Popovich, Bill Walton asked who that was.

Ralph Lawler: “They’re telling us to talk about the game.”

Bill Walton -“No it’s not gonna happen, what are they gonna do fire us?”

Oh yeah, there was a game going on. Despite the Clippers already knowing they would be the eight seed and the Jazz would take the five, the end result didn’t change much and was just more for bragging rights. Nevertheless, the Clippers pulled through in OT and won 143-137.

While this is his final regular season game, this may not be it for Ralph Lawler. Depending on the TV schedule, he may be on the call in the playoffs as the Clippers face the Warriors. But if this is it, it has been a tremendous end to a historic career and Bill Walton showed his appreciation the only way he knew how.