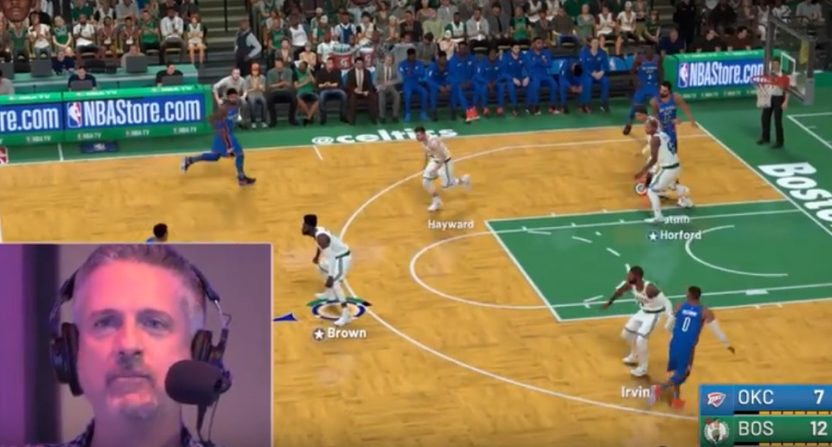 Last year, 2K Sports’ NBA 2K18 title decided to add some “guest commentators” who’d pop into the announcing booth with Kevin Harlan for specific games, going with Kevin Garnett and Kobe Bryant. Those two famed former NBA players are back for NBA 2K19, but the franchise has also added…Bill Simmons?

Simmons, who’s currently CEO of The Ringer and on a HBO deal focused on “creating and producing sports-themed content,” is now taking his talents to video game land as well, as shown in this new trailer:

The trailer includes Harlan calling Simmons a “sportswriting heavyweight,” Simmons saying “I was there for every step of the video game revolution,” Simmons talking about voting Ben Simmons third or maybe second-team All-NBA, Simmons saying LeBron is “indestructible” and would put his leg back on if it rolled off, and more. It also involves him praising a Celtics’ player, Jayson Tatum, saying “Tatum is so much better than I think anyone expected; this guy is a future MVP candidate.” Sadly, there is not a “No one denies this!”

The idea of breaking video game broadcasts up with some special guests from time to time has some merit, and including Simmons will certainly appeal to some. And this franchise has brought in some NBA-adjacent personalities before, including LaVar Ball (for messages in Career Mode) last year, so this definitely isn’t unprecedented. But not everyone is a fan of Simmons, as the reception for his work on NBA Countdown and Any Given Wednesday illustrates. We’ll see what the overall reaction to Simmons in this game is.

Correction; this piece initially had Simmons as The Ringer’s editor-in-chief; that would be Sean Fennessey. Simmons is The Ringer’s CEO.