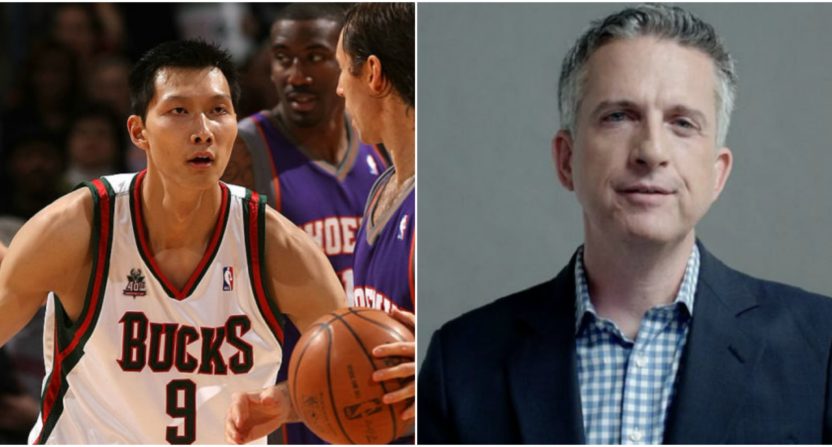 On Thursday, Deadspin published a fascinating story about the ill-fated career of former NBA forward Yi Jianlian, who was drafted No. 6 overall in 2007 but averaged only 7.9 points and 4.9 rebounds over five years. The piece centers on the popular punchline that the Milwaukee Bucks selected Jianlian after seeing him work out against a chair. The anecdote has been accepted as fact across the NBA thanks largely to repeated references to it by ESPN/Grantland/The Ringer columnist Bill Simmons, who dubbed Jianlian “Chairman Yi.”

The problem, Deadspin’s Matt Giles posits, is that the infamous chair workout never actually happened. Or if it did, no one at all can find evidence of it or even testify credibly to having seen it.

“I don’t think I ever saw it, but I was aware of it because of Bill Simmons’s tendency to joke about it,” says ESPN’s Kevin Pelton. (Simmons, through his publicist, declined to comment for this article. Multiple emails to his personal account were unanswered.)

“I’ve never seen it,” says Jonathan Givony of DraftExpress. “People didn’t film workouts back then, and so I always thought it was more of a mythical thing.”

Even Larry Harris, the GM of the Milwaukee Bucks, was dubious of the video’s existence: “I had heard about it, but never followed up on it because I find it hard to believe that anyone in any NBA front office would not take a guy solely because he scored on a chair.”

“I expected you to ask about the chair,” says a member of Yi’s camp when I called to talk about the video’s existence. “That was the first thing that everyone talked about at the time. Questions about the chair video. I heard he went against a chair dozens of times, but I have no idea where it came from.”

As laid out by Deadspin, it seems Simmons got the Yi-against-a-chair idea in his head after hearing Celtics general manager Danny Ainge joke that, “It was a good workout, Yi against a chair or a coach.” In Simmons’ writing, the chair went from a story to a video to an embodiment of Yi’s lack of preparedness for the NBA. For example, here’s what the then-ESPN columnist wrote to Chad Ford in a 2007 mock draft:

As for Yi, I fully expected you to tell us that he’s the best player available at No. 5 — you’re the same guy that once touted the virtues of Darko Milicic and Pavel Podkolzine. You’ll have to excuse me if I’m dubious of a Chinese star who A.) refused to workout against anyone, and B.) dominated the 19-and-under championships when he was lying about his age and happened to be 22 at the time. But hey, I‘ve never seen anyone look better offensively while posting up a chair. So you might be onto something.

A decade later, we have this video of Yi working out alone, but no clip involving a chair.

Here’s how Giles sums up the entire enigma:

We’ll probably never know whether Yi dunked on a chair. If the video ever existed—and that is a big if, considering the first mass-market phones capable of taking and immediately uploading video didn’t come along until a year or so later—it’s sunk into the ether. But it doesn’t take much of a leap to explain how the idea of a chair video was willed into existence. Thousands saw footage of Yi breezily working out by himself, and when coupled with Ainge’s quote and Simmons’s authoritative repetition, the myth was born. We may all remember that video, but we also can’t trust our own memories.

Simmons’ columns have always blurred the line between joke and reality, and it’s possible he always meant the chair as a metaphor for the folly of workout videos. And if he really did (or does) believe he saw the mythical video, it wouldn’t be the first time memory has proven unreliable. It happens sometimes. We don’t know for sure what Simmons’ intent was because, per Deadspin, declined repeated request for comment.

Regardless, the chair story defines Yi in the memory of many NBA fans, and the fact it might have been a fabrication is probably a good lesson in the importance of precision and the stakes of writing something that isn’t quite true.