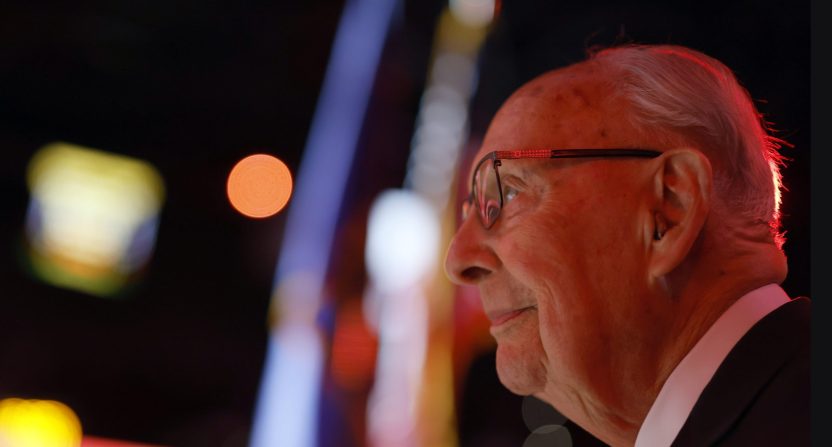 If you’ve ever heard the phrase “Rip City” while watching a Portland Trail Blazers game, you have radio broadcaster Bill Schonely to thank for that. The original radio voice of the Blazers, Schonley has died at the age of 93.

Schonely was a veteran broadcaster, having covered LSU football and basketball, Washington Huskies football, the short-lived Seattle Pilots, and many other sports when he was approached by Trail Blazers co-founder Harry Glickman in 1970 to become their radio play-by-play announcer. He would go on to call 2,522 Blazers radio and TV broadcasts through 1998, having also become the team’s television play-by-play voice between 1992 and 1994.

It was during Portland’s inaugural season when Schonely shouted “Rip City, all right!” after Jim Barnett made a long shot during a comeback against the Los Angeles Lakers. While the phrase seemed to bewilder those around him, it stuck.

“Who knew those two words
could mean so much, to so many”

“It took a little while for that phrase to catch on,” Schonely said of “Rip City” in April 2022. “I had no idea that all of this was going to happen, but it did and wherever you go … it’s humbling to me, but it’s ‘Rip City.’”

By the time Portland made it to the 1977 NBA Finals, “Rip City” was the rallying cry of the franchise. Nowadays, you’ll see “Rip City” on one of Portland’s jerseys, the only time that their uniform hasn’t said either “Portland” or “Blazers.”

The deep-voiced announcer also had plenty of other memorable catchphrases, such as “bingo-bango-bongo,” “crossing the cyclops,” and “lickety-brindle-up-the-middle,” to say nothing of “You’ve GOT … to … make … your … free throws.”

After giving up announcing in 1998, Schonely returned to the franchise in 2003 as an ambassador, hosting pre-game segments and making appearances at games and community events. It wasn’t uncommon to see him talking with fans at “Schonely’s Place,” a bar named for him in the arena concourse. He retired from that role in 2022.

Plenty of tributes rolled in for the “Rip City” originator following the news of his passing.

I was the kid who used to sneak a radio under the covers to listen to the great Bill Schonely. He made me to want to be a broadcaster. Inspired and entertained us all. He said goodbye to #ripcity last night, at the age of 93. Thank you Schonz. pic.twitter.com/u0lT3AnX6U

I knew the day would be here eventually, but it’s still never easy. The legendary voice of Trail Blazers, Bill Schonely, has passed away at the age of 93. The Schonz brought countless smiles to faces for decades—and will continue to.
God speed sir. ??? #RipCity pic.twitter.com/jKVMHhoT7T

Heartbroken this morning. Bill was a longtime friend of my grandfather. My dad and uncle used to sell Rip City t-shirts as kids.

There was no more iconic voice for an NBA franchise. Rest in peace, Schonz. #RipCity https://t.co/fdBpVakLMY

You’ve got to make your free throws.
Bingo, bango, bongo.
Lickety brindle up the middle.
And of course, Rip City.

Bill Schonely was the ultimate Trail Blazer from the ‘70s to the ‘90s. Ugh, sad day.

My friend Bill Schonely provided the soundtrack for generations of @trailblazers fans and forever made our beloved Portland into #RipCity. I join all of #RipCity in extending condolences to Bill’s wife Dottie & his entire family. RIP to a true Oregon legend. pic.twitter.com/MkEebohTRB