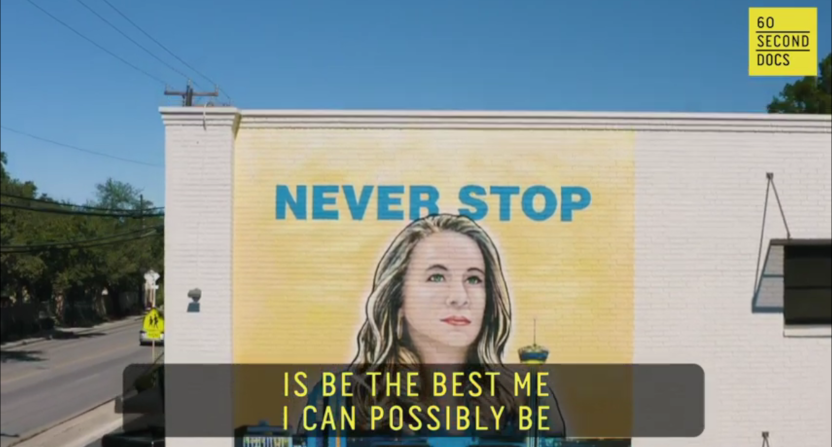 Since 2014, Becky Hammon has been an assistant coach for the San Antonio Spurs, a position she initially took after a 2013 ACL injury led to her ending her famed playing career. Hammon was the first full-time female assistant coach in the NBA (Lisa Boyer worked as a volunteer assistant with the Cleveland Cavaliers in 2001), and her presence with the Spurs has been quite a notable one over the past six seasons. Recently, Hammon was featured in 60 Seconds Docs’ “Never Stop” series, in partnership with Cadillac, a series that showcased both what she’s done to this point and also a mural about her (seen above) that was created for the series. Here’s that video:

Earlier this week, Hammon spoke to AA about this series and about her NBA coaching career so far. On her involvement in the series, she said “We got collaborating together. I did an interview with their team, it was about an hour-long interview with their group, and they came up with this idea for this mural and the theme ‘Never Stop.’ I actually didn’t know what was going to be on the mural so when I got to see it and see the theme they chose, I was like ‘Wow, that’s really super cool.’ And it was all them, it wasn’t me. I just did a lot of talking. They did a lot of listening and came up with a very cool theme that I think captures my journey very well.”

Hammon said the segment’s emphasis felt like a fit for her given the various barriers she has pushed through.

“The ‘Never Stop’ theme resonates just because throughout my journey, I’ve had a lot of roadblocks, I’ve had a lot of doors slammed in my face. I’ve been the person not picked. I’ve been the person that has been kind of pushed to the sides at times, the last kid picked at recess, if you will; I’ve been there. I’ve also been the all-star, the person picked to all-star teams. And throughout it, I think my approach to some of those failures or disappointments or letdowns has been that drive in me to never stop and to keep pushing and persevering when it’s hard and when I want to quit or when I have doubts. I think I always go back to what’s been built inside me, and that’s to literally not stop.”

In August 2014, Hammon signed on with the Spurs on a full-time basis. She had previously been spending time with them as essentially an intern while she was recovering from an ACL tear, and that ultimately led to her getting a shot at a larger coaching role.

“I’ve always been kind of a natural coach and teacher. I think that’s something that’s just how I was made. But I’ve also had to be a great student of the game. I’ve had great teachers, growing up, throughout my basketball journey. And how I got into coaching…obviously I got injured, and spent kind of an intern season just sitting in with the Spurs and Pop [San Antonio head coach Gregg Popovich] and their staff and just learning their system. I came back after my injury to play one more year, and then just decided to get into coaching. And it wasn’t necessarily with the Spurs; I didn’t know that that was going to unfold the way it did, I had no idea. What I did was just be persistent in my pursuit of learning, and that led to Pop giving me an opportunity.”

Hammon said she also tried television commentary during her time away from the court, but it wasn’t the right fit given the lack of personal stakes.

“I was doing some TV during that offseason when I was injured, and I was sitting in and doing a Pac-12 game with a guy. …We were sitting kind of in the back area there, and the losing coach came by us to head down. And the guy looked at me and said ‘That’s why TV is the best, being a broadcaster is the best, because you never have to leave the gym a loser.’ And I was like ‘Well, this is not for me, because I can never leave the gym a winner.’ That right there was kind of an aha moment for me; I don’t want to be talking about the people in the battle, I want to be in the battle, I want to be in the trenches.”

“And when I look back and I think ‘What do I ultimately want my life to look like?’, I want impact, I want a life of impact.’ I had no idea at that point, I was just thinking to myself ‘What has greater impact, a color commentator or a coach that impacts their players and the camaraderie in the locker room?’ For me, I kind of said that silent prayer of ‘I would rather have a life of impact,’ and I had no idea what the next eight to nine years were going to look like for me. And now, going into year seven with the Spurs, it’s just kind of funny to see it all unfold.”

She said she enjoys the chance to get to personally connect with players.

“Ultimately, why I got into coaching was for impact and relationships and being in the battle and being in the trenches. And just being able to share knowledge that I’ve learned. I have a crazy journey, I’ve been all across the world, and hit all sorts of mountaintops and desert lows. I know what it means to be the last one picked, and I know what it means to be a front-and-center all-star. And I never forget the emotions and the range of that feeling and everything in between to be able to relate to people that might be in those circumstances.”

It’s not easy being a female coach in the NBA. When Hammon was hired, she wasn’t just the first full-time female NBA coach, she was the only one. And she said that the reception she received behind the scenes was sometimes discouraging.

“You know, when people are talking about you, you’re always kind of always the last one to know. And I think there was a lot of buzz initially when the first announcement was made, and I think a lot of people said the right things in front of the camera. But behind the scenes, people aren’t so politically correct, they’re going to say what they mean.”

“And if you want to talk about equality and meaningful change, I would love to push that button a little bit more, a little bit harder. There are still a lot of people out there that have some thoughts or ideas about where women should be, what women should be. Those covered areas in people’s minds and hearts, I want to bring them to light and expose them.

Hammon said she’s taken criticism from both men and women for her push for more women in coaching roles in men’s sports.

As for her future goals, Hammon said she wants to take on a head coaching role.

“But I’m willing to try, and put it out there, and hopefully whether I fail or succeed, regardless, I make opportunities for women behind me and for young girls behind me. And not just for the minds and opportunities of girls, but also that little boys see a strong woman and what that looks like, a strong woman leader.”

We have a Thanksgiving NFL doubleheader with the traditional Detroit and Dallas games. No primetime game as Baltimore-Pittsburgh was pushed to Sunday due to COVID.

More than money, though, Jordan highlighting a cause like this is huge.

This would ordinarily be rivalry week, and we do get a couple of those mixed in.

"Here is a self-made  man, who doesn’t ask anything from these kids in return for his help. He doesn’t do it for the money or recognition, he does it to help these boys become men and  make a better life for themselves and their family. After spending time with him these past few years, it really is all he wants."

We have a Thanksgiving NFL doubleheader with the traditional Detroit and Dallas games. No primetime game as Baltimore-Pittsburgh was pushed to Sunday due to COVID.

More than money, though, Jordan highlighting a cause like this is huge.

This would ordinarily be rivalry week, and we do get a couple of those mixed in.

"Here is a self-made  man, who doesn’t ask anything from these kids in return for his help. He doesn’t do it for the money or recognition, he does it to help these boys become men and  make a better life for themselves and their family. After spending time with him these past few years, it really is all he wants."