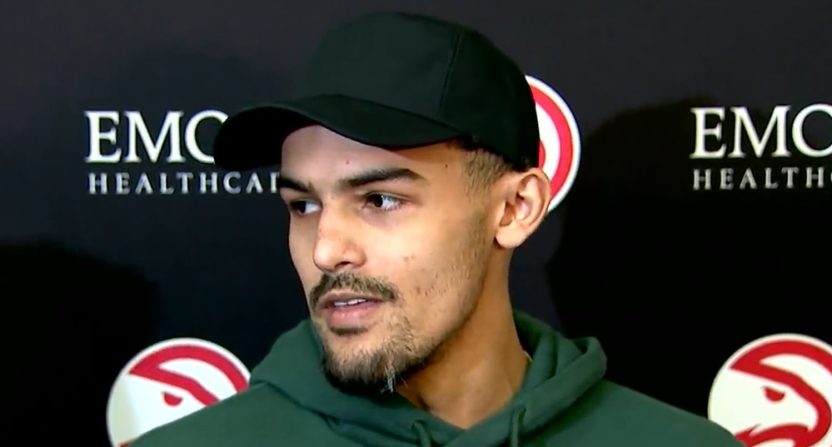 After Trae Young reportedly got into an altercation with Atlanta Hawks head coach Nate McMillan, the superstar NBA player also had a testy exchange with a reporter.

Last week, Young was ruled out of Atlanta’s Friday night game with a right shoulder injury. Not only was Young not on the court for Atlanta, but he wasn’t on the bench with his teammates, or even in the arena. After the surprising absence, Shams Charania and Sam Amick of The Athletic reported Young skipped the game following a heated exchange with McMillan during the team’s shootaround.

When he met with the media this week, Young attempted to downplay his reported spat with McMillan. But one reporter pushed the Hawks point guard for answers during a pregame exchange that turned tense.

Hawks guard @TheTraeYoung this morning… answering all the question about missing Friday’s game and his displeasure with private conversations being made public – worth a listen pic.twitter.com/DjBsgpljiX

“We are all grown men here, and sometimes we don’t always agree. It’s unfortunate that private situations and private conversations get out to the public,” Young told reporters before the Hawks Monday night game, which he was healthy enough to play in. “I guess that’s the world we live in now. I’m just focused on basketball and helping my team win, that’s what I have to refocus on.”

Zach Klein, sports director for Atlanta ABC affiliate WSB, pressed Young to elaborate on the private situation. Not only was Young reluctant to offer more than what was already reported, but he appeared taken aback by the question.

“It’s hard for people who don’t know the full situation to understand it,” Young said after noting it felt like Klein was coming at him. “Like I said, it’s a private matter made public, which was unfortunate. If it stayed private, it probably wouldn’t have been as big of a deal. Like I said, it’s unfortunate. My job and my goal is to win a championship, and that’s all I’m focused on.”

Unsatisfied with Young’s lack of detail, Klein implored him to look at the perception of being the team leader and not showing up for their game.

“When you’re an outside guy like you are and you don’t understand a private matter and private situation, you should probably stay on the outside,” Young answered. “It’s unfortunate that everybody has to understand and know a little bit of the details that went on inside. I mean, inside here we’re all good. If you’ve got any more questions about that you can talk to somebody else about it. That’s all I’ve got to say about it.”

Conceding that he wasn’t going to get Young to divulge any details about the incident with McMillan, Klein asked about there being a disconnect with his teammates, noting that John Collins was at the game despite being injured.

“But you don’t know the full story – again,” Young said while staring at the WSB sports director before confirming that he had no interest in addressing the matter any further.

According to The Athletic’s report on last week’s absence, the conflict stemmed from McMillan asking Young to participate in a shootaround while he was receiving treatment on his right shoulder.