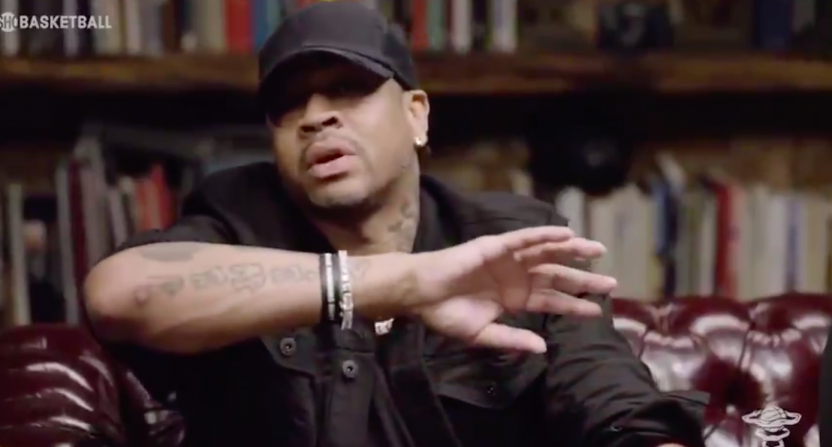 Allen Iverson was never one to mince words in his playing days and the NBA legend and Hall of Famer hasn’t changed in retirement. While Iverson’s persona has softened a bit in recent years as he’s morphed into an ambassador for the game and supporter of today’s NBA players, that doesn’t mean he’s still not holding grudges.

Iverson recently appeared on the All the Smoke podcast with Stephen Jackson and Matt Barnes and, when the topic of talking heads they didn’t like came up, he made his feelings about a particular person clear, even if he didn’t name that particular person.

Allen Iverson has a message for a certain TV personality

"The way you hate me, motherf*cker I hate you too…you and your daddy." ?

“I hate you. There’s one guy, you know who I’m talking to. That they talking about right now. It ain’t who you think it is…I got love for Skip [Bayless]… It’s not you…but it’s a guy that do exactly what you do. And just trust me, the way you hate me? Motherfucker I hate you, too. The feeling is so mutual. And you don’t help me and I don’t help you. And I’m fine out here, regardless of how much you talk about me…and I’m not mentioning your name because I don’t want the whole world to even know that them and I are getting that type of love…you know…oh, and, you and your daddy. The both of you.”

“The world can figure it out, but I ain’t saying your name.”

Naturally, the world wants to figure it out.

So right off the bat, Iverson wisely took Skip Bayless out of the running since he knew that would be everyone’s No. 1 pick. So he’s out, even if Skip tried to take credit (because of course, he did).

I have love for you, too, Allen Iverson.

Iverson’s statement that its “a guy that do exactly what you do” might have put the focus on his former counterpart, Stephen A. Smith. Smith did write about Iverson’s personal struggles and there is a rumor that Iverson once threatened Smith if he ever saw him again. But considering Smith presented Iverson at his Hall of Fame induction, it’s almost certainly not him.

The “you and your daddy” line certainly added an interesting wrinkle and that might be why some pointed the finger at Dan LeBatard, though the ESPN radio host was quick to dispel that notion.

I ain’t never had any beef with Allen Iverson. Leave me out of this. However, I don’t speak for my father.

For a lot of people, the smart money appears to be on Jason Whitlock. The Outkick writer and media personality, who is currently locked in a feud with, well, everyone, has a long history of harsh criticisms for Iverson, who he’s called “spoiled” and a “loser” in past columns and appearances. He’s also criticized Iverson’s tattoos and mocked him for failing to win gold with Team USA.

For those wondering who Allen Iverson was talking about in that "All The Smoke" interview going viral, this is a column Jason Whitlock wrote about AI in 2009 for FOX Sports… ? pic.twitter.com/CRME0tqoFM

One of many past takes from Jason Whitlock on Allen Iverson game and influence in the NBA. pic.twitter.com/F3x9Kw1pnU

Whitlock also took to Twitter to deny that he’s the person drawing Iverson’s ire, though considering he’s been on TV and radio talking about the NBA for the last two decades, we’re pretty sure Allen knows who he is.

I have no real connection to Allen Iverson. Dude probably doesn't even know I exist. He talks about someone's "daddy." Schaap and Le Batard have prominent fathers. I have no clue who Iverson is talking about. Don't care. But move past your Whitlock Derangement. https://t.co/VKjItA67E2

Whitlock does bring up another interesting option in Jeremy Schapp. Schapp reported on Iverson over the years for ESPN and he has a very famous father who was also in sports media (Dick Schapp). But is Allen Iverson really holding a death-grudge over Jeremy Schapp? That seems…unlikely.

Speaking of father-son media duos, there’s a decent option on the local level in Howard and Spike Eskin. Both have well-worn reputations for hot takes and bold stances on Philly sports and it seems likely that Iverson has heard things that both of them have said about him. But Spike tweeted that it’s probably not the case while others have noted that Spike’s radio career really doesn’t line up with Iverson’s playing days.

I am honored that so many people are tweeting me telling me this is me. I can assure you it is not. I'm almost certain Allen Iverson has little to no idea who I am much less despise me like this. https://t.co/TL83H4qU8v

As for the court of public opinion…all roads continue to lead back to Whitlock, who seems like the most likely candidate based on the things he’s said and given his platform during Iverson’s career.

It’s one of those 2. pic.twitter.com/7VYu2w2KZE

As for how Whitlock makes sense given the “you and your daddy” comment, some have wondered if that’s actually a reference to Clay Travis, Whitlock’s boss at Outkick. Truthfully, that seems like people trying to connect dots just to make their theory work.

Perhaps one day soon we’ll find out who, exactly, Allen Iverson hates with a seething rage that can never be quenched. But until then we can only guess.