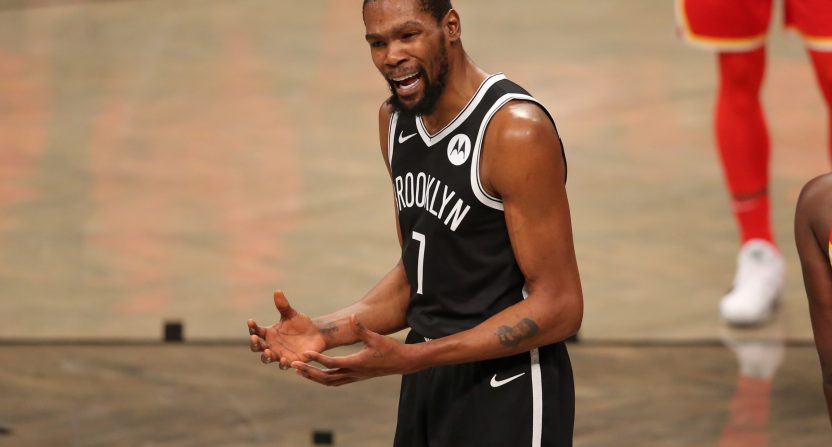 A Tyler Ricky Tynes interview with Scottie Pippen in GQ was prompted by Pippen’s desire to promote his new Digits bourbon brand, but it’s wound up getting a lot more attention thanks to Pippen’s comments on Brooklyn Nets’ star Kevin Durant, and then thanks to Durant’s response. For whatever reason, Pippen decided to criticize Durant, who had 48 points, 9 rebounds and 6 assists (a new record for points in a Game 7) in the Nets’ 115-111 Game 7 loss to the Milwaukee Bucks. Here’s the key part of what Pippen said (Tynes’ interjections are bolded):

It’s not an individual game, you can’t go into basketball and beat nobody with an individual record. And I used this example of what happened to Kevin Durant just the other day: this is the first time we’ve ever really seen Kevin Durant have to be the man and bring the team home. We ain’t never really had to see that because he’s had [Russell] Westbrook, Steph Curry, Klay [Thompson]. He’s been beating people, definitely in Golden State, by committee. With a team. He did that, but that team already knew how to win without KD. But you put KD in Brooklyn, and Kyrie [Irving] gets hurt and James Harden ain’t that guy, now KD not only has to score for them but also make plays for them. And this is no knock to KD, but they asked me, “Has he surpassed LeBron James?” And my answer was: LeBron James knows team basketball better than KD.

KD can score better than LeBron, probably always have been able to. But has he surpassed LeBron? Naw. He tried to beat the Milwaukee Bucks instead of utilizing his team. You see what I’m saying? LeBron James would’ve figured out how to beat them and he wouldn’t have been exhausted and he may not have taken the last shot. But LeBron ain’t KD, and KD ain’t LeBron. KD is a shooter, a scorer. But he doesn’t have what LeBron has.

A two-time MVP. In the Finals. [Laughs.] That’s good when you’ve got Steph Curry leading the troops. But when you’re leading the troops, you gotta know how to lead and win. And KD, as great as his offense was, it turned out to be his worst enemy because he didn’t know how to play team basketball when it came down to it. He kept trying to go punch for punch. They were beating him with Giannis [Antetokounmpo], [Khris] Middleton, and what’s the little guard name?

Yeah, Jrue Holiday. So, you got three guys scoring for the other team and you the only guy scoring for your team? Who gonna win? And we in the overtime and you done played every minute?! You gonna lose. But, LeBron would’ve been better in that kind of situation because he would’ve used his team to pick them apart.

So then what else does Kevin Durant of all people need to learn at this point?

He needs to learn how to utilize his teams. He has to learn how to set up his teammates to be better. That’s it. As great as he is, there’s a [cap] to his [talent]. He could’ve easily made that three, killed them in regulation, and we wouldn’t have been talking about this. But I knew going into overtime, he wasn’t gonna make it. He was taking all the shots. You done played the whole game, bro! And they’ve got guys physically wearing you down. You gonna lose. Giannis was under the same stress but not quite. Giannis got rest and he didn’t have to score every time. KD? He got no rest and pretty much had to put a bucket on the board every time they went down. And he did that, but that’s a lot. If he had a chance to do it all over again he would probably do it the same way. But he ain’t have no more. He shot that last shot and it was shorter than Giannis’ free throw shots. [Laughs.]

Look, the debates about which individual player is best are incredibly tired (unless you’re a producer, panelist or viewer of First Take or Undisputed), so this probably would have just sparked some minor discussion and then evaporated from the news cycle without a response. But boy, did Durant deliver a response:

Didn’t the great Scottie pippen refuse to go in the game for the last second shot because he was in his feelings his coach drew up the play for a better shooter??

This guy Scott also wanted to enjoy his summer so he chose to rehab during the season lol yo @ScottiePippen THEY FOLLOWED PHIL, NOT YOU!!!

This is just one of the many criticisms Durant has put out on social media. But honestly, that’s somewhat refreshing, especially when it comes to people talking about him in particular. For many athletes, there’s long been the approach of “Let former players and media personalities say what they want, just ignore it,” and sure, that does work in some circumstances. But for those who have a specific critique of someone who’s going at them, there’s some value to putting that out there. Durant certainly has his own fans and his own audience at the moment, probably more than Pippen does. So it makes sense for him to not just cede the floor, and to fire back. And that certainly makes for an entertaining NBA media sphere.