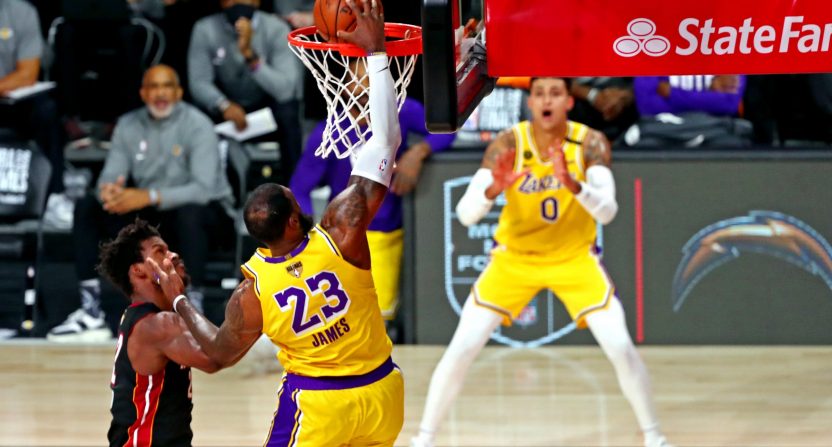 A day after the one-year anniversary of China suspending NBA broadcasts in the wake of Daryl Morey’s tweet in support of Hong Kong protestors, Game 5 of the NBA Finals will be shown on China’s state-run CCTV sports network.

The fallout from that moment has been immense for the NBA and its broadcast partners, with everything from a massive projected revenue hit that could drive the salary cap down to things like Woj’s Tencent show being in limbo after he liked Morey’s tweet. Now, though, the league is back on broadcast television in China, and the dates being pretty much exactly a year apart seems like too big of a coincidence to not be relevant.

Of course, when the government decided to suspend those broadcasts, they probably assumed that in a calendar year they’d be resuming for a new season, not for the end of the NBA Finals, but here we are.

ESPN’s Brian Windhorst wrote up the news here, noting that Silver has made rebuilding the league’s relationship with China a big priority, and that China’s statement mentioned the aid from the league for China’s battle against COVID-19.

In its statement, CCTV cited the NBA’s assistance with fighting COVID-19 in the country as a reason for restoring broadcasts. The league donated more than $1 million and medical equipment to China earlier this year. The league and some players have expressed support for China during the past year.

“During the recent Chinese National Day and Mid-Autumn Festival celebrations, the NBA sent their well wishes to fans in China,” CCTV said in a statement. “We also took note of the league has been continuously delivering goodwill [to China], particularly making positive contributions to Chinese people’s fight against COVID-19 pandemic.”

The NBA’s relationship with China has become an attack point for right-wing politicians and media members, who have focused on it in an effort to discredit the league and players’ social justice message and work. One of those attacks ended up leading to Woj being suspended by ESPN for a profane email to a Republican senator.

It’s crazy that it’s been a year since that happened; that the NBA is still wrapping up its season makes it feel like less than that, though pretty much everything else that’s happened in the world makes it feel like a lot longer. But if this is a sign that the NBA’s Chinese relations are back on the right track, it could have very big implications for the league going forward.