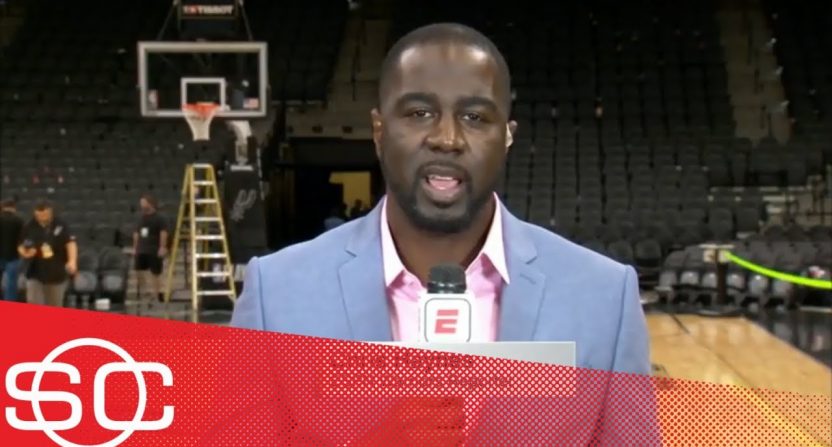 Before he was an ESPN NBA reporter covering his fourth consecutive NBA Finals, Chris Haynes was a late-20s dude in Oregon trying to feed his wife and four kids on a security guard’s salary.

After graduating from Fresno State at age 27, Haynes had found his way into basketball writing by cold-pitching online publications, then packing up for Portland when Slam Magazine suggested he move to an NBA city. For a year, he worked security during the day and covered Trail Blazers games at night, writing for free even as he began to break news around the team.

“In the meantime,” Haynes recalled this week. “I’m struggling with the fact that I’m a college graduate, the first college graduate in my family, and the only job I can get is a security job.”

Then Comcast SportsNet Northwest (now NBC Sports Northwest) hired him as a full-time Blazers beat writer, and soon everything changed.

Since joining Comcast SportsNet December of 2011, Haynes has risen to the very top of his profession. In 2014, he scored a job as Cavs beat writer for the Cleveland Plain Dealer, leading a team of reporters brought in to cover LeBron James’ homecoming. Two years later he jumped to ESPN to report on Kevin Durant and the Warriors, which he has done, often brilliantly, ever since.

Now Haynes is one of ESPN’s most prominent NBA reporters, as well as the rare journalist who has covered both the Cavs and the Warriors during the teams’ current four-year rivalry. Awful Announcing spoke with Haynes this week about the ongoing Cleveland-Golden State series, his rapport with NBA stars, what it was like to land his dream job and more. The interview has been edited for length and clarity.

You have this unique perspective on the Finals from having covered both the Cavs and the Warriors. As everyone talks about how they’re sick of these two teams, is it hard to find stories about Cavs-Warriors Part Four? Do you feel like everything is kind of tapped out?

This year in particular, I think it was difficult to find stories going into this series, but these guys are so polarized, guys on both teams, that I think it has been more compelling than what people expected. Tristan Thompson and Draymond getting into it. LeBron James speaking his mind. Draymond speaking his mind. There’s a lot of character. So I think overall the storylines leading up to the series, they weren’t up to par with the previous three years, but great characters always make for great stories.

Most basketball fans were rooting against Cavs-Warriors, but obviously you have connections with guys on both teams and in both organizations. Were you the one person who was rooting for this series, or were you also ready for something different?

For myself personally, I knew it would be a plus for me just because I know both sides, the management, the players, the coaches. But I was tired of going to Cleveland for the Finals. I wouldn’t have minded a trip to Toronto or a trip to Boston for the Finals for my own personal enjoyment. But I wasn’t so opposed to seeing a round-four.

I do think this is the last time we’re going to see these two teams match up as they’re constructed. But no, I wasn’t really opposed to it. But I got why everyone else didn’t want it to happen. I think for the most part people felt like this roster as constructed by the Cavs is not on par with rosters of prior years, with Kyrie Irving. A lot of people were down on it because they didn’t think Cleveland stood a chance. And obviously, right now that’s probably a safe assumption.

I took the job [with the Cleveland Plain Dealer] when LeBron announced he was coming back. We knew how influential LeBron was: My paper brought in a LeBron reporter because we could never have enough LeBron coverage. That was my guy, Joe Vardon, but it got to the point where I think that wasn’t the right fit because me and him got into it sometimes during my tenure there — and that’s my guy, my really good friend — because LeBron is the Cavaliers. I didn’t like the arrangement when I was there, but it all worked out.

I’m just trying to explain how much coverage LeBron gets and how much you have to pay attention to him. He sets the stage, he sets the narrative. … As great as Draymond, Stephen Curry, Klay Thompson and Kevin Durant are, LeBron, when he speaks, man, you have to cover it. That was a unique experience.

Let’s say you’re offered a one-on-one interview with LeBron, another with Steph Curry and another with Kevin Durant, but they’re at the same time in different places, so you have to choose only one to go to. Who are you going with?

When you watch these playoff press conferences on TV, you see a lot of what looks like animosity between players and reporters, with players giving snarky answers and reporters looking almost afraid to ask questions. And then when you’re up there, you’re cracking jokes, you’re laughing. You and the players seem to have a real rapport. Where does that come from?

Just knowing the players, knowing what makes them tick. … There are reporters who — and this may be their style, I’m not knocking them — that will ask absolutely blunt questions, and if that player is not agreeing with him or if that player has an issue with him due to past experiences, they’re going to come off defensive.

I asked LeBron a question prior to Game 3 about that Game 1 film footage, and he gave a great response. Most players don’t like talking about games that happened two games ago, but because of my rapport with him he gave me a nice response. It’s all about what makes them tick. I know the guys, I know what makes them tick, I know what bothers them. I have to ask some tough questions, but there are ways of rephrasing to make sure you get what you want.

LeBron responds to viral video of him on bench in Game 1 reacting to learning Cavs still had a timeout late, “It went viral? Damn cameras!” ? pic.twitter.com/qNSO5d7Mqb

Your career has come a long way in a short period of time. If I had asked you 10 years ago, where would you be in 10 years, what do you think you would have said?

Look, in elementary school, I used to always get bad grades. I was a bad-ass kid. There’s no denying that. So my dad, a lot of times he would take me to downtown Fresno. And at that time in Fresno there was a shelter where homeless people stayed. And my dad would drive me over when I was a little kid — he did this a while, from when I was up to 13, 14. He would drive me over there, and he would say “Look at that guy over there. He was a cool kid in high school. Look where he’s at.” “Look at that girl over there. Everybody liked her. She was doing this and that.”

So that was his way of trying to motivate me to get it together. But at that time, when I was little, I thought my dad really thought that I was going to end up there. So growing up — as far as 26, until like my junior, senior year of college — I was successful in life first of all if I was alive, because I lost a lot of friends to gang violence, drugs, incarceration. So first of all, I made it if I was alive. But I felt like if I had a car, if I had an apartment, if I had a regular nine-to-five job, I made it in life. Because I didn’t want to be living at the places my dad was taking me.

When you got that call from ESPN in 2016, did it feel triumphant, like you had made it to the top of your profession?

When I was in Portland I would break Portland news, and it would get some buzz. But nobody nationally — well I won’t say nobody. People don’t care about Portland and the Trail Blazers like they care about LeBron. When I was in Cleveland, that was my moment on the big stage. When I was in Cleveland, my goal was to make [ESPN] mention me as much as possible. I wanted to break every story, I wanted to dominate and crush everything in my path, and I wanted to get to the point where ESPN had to credit me so much that it was like, “Damn, why don’t we just hire this dude? Why don’t we just bring him on?”

I wanted to prove to everybody that I could sit on a grand stage, and that’s what happened.

What’s the biggest difference working for ESPN vs. working anywhere else that you’ve worked?

Especially in breaking news, you’re isolated a lot. You’re by yourself. You dictate the flow. But ESPN’s a big team, and there’s a lot of people and a lot of voices. It definitely helps at times, but sometimes it takes some getting used to. You’ve got a lot of people to answer to.

It’s a machine, man. It’s a powerful machine. That’s something you kind of note before you get into it, but you don’t really understand the magnitude of it.

So what do you think is next for you? Covering the Warriors in the Finals every single year until the Armageddon, or what?

Nah, I don’t want that. ESPN has given me a platform to do this dinner series. I did a dinner TV sit-down with Kevin Durant and Michael Beasley. I did one with Damian Lillard and C.J. [McCollum]. I got a one-on-one sit-down with Ben Simmons that kind of started the whole rookie feud [between Simmons and Donovan Mitchell]. I want to keep doing stuff like that.