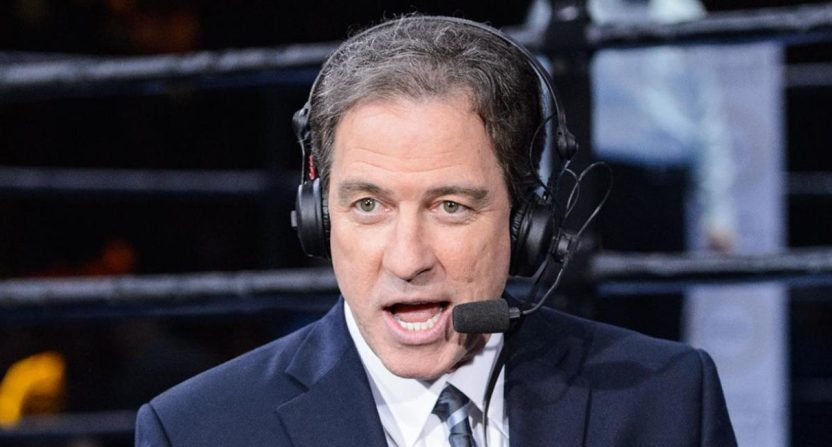 Does anyone like the in-game coach interview on NBA broadcasts?

Fans tend to mock the segments, held between quarters or halves, as empty and uninsightful. Coaches visibly hate the exercise. Even the reporters conducting the interviews often seem uncomfortable.

Well count TNT play-by-play man Kevin Harlan among the many, many detractors of interviewing coaches in the middle of games. Harlan appeared Tuesday on The DA Show on CBS Radio and explained to host Damon Amendolara why Gregg Popovich hates being interviewed on the court and why the whole practice is unproductive.

[Popovich] is old school, and I think he absolutely, positively detests these coaches being miked up. I think it’s a very simple answer. He thinks this is the most ridiculous thing the league has ever done. And in every coaches’ meeting, every summer at the end of every season, he is the first one to stand up and complain vehemently about these coaches being miked.

I think he just feels there’s got to be some kind of sanctuary where, in the laboratory—which is his sideline, his practice, his locker room—where there is no outside influence. He constantly turns off the microphone. I think it is his way, to be honest, in the wake of Craig Sager no longer being on our sideline … he made the Sager thing fun and enjoyable, and we all got it. And now he has so much hatred for the for the fact that he’s got to do this, as a lot of coaches do. They’re not at their best, their mind is some place else.

Rarely do you get any kind of introspective, any kind of depth, any kind of real meat to chew on when they deliver the answer. And I have not worked with a single sideline reporter, at CBS or at Turner, that has not brought this up and said “I’m scared to death to ask him a question. What should I ask?” It almost serves as this gigantic cloud over every broadcast. What is Popovich going to do? How is he going to treat us? Can we even use it because of his answer? And you know what? I get it. There’s a lot of things I don’t want the public in my life about and I’m sure yours. It’s a public game, and I get that. I don’t know that the fan is getting that much out of these sideline interviews, to be honest.

He’s old-school, and I’d guess—he’s never told me this—that this is his way of saying “I’m just not going to give you much. There’s not much to say. The questions you ask are never going to be what I’m thinking. I’m in the middle of trying to re-engineer my team and get them pointed with that compass in a new direction or continue on the same way.” They all look really uncomfortable, and to be honest I think they look bad. I don’t think it enhances the broadcast.

Harlan seemed to realize how brutally honest he had been because he laughed and said, “I hope I have the job tomorrow.”

Amendolara tried to let Harlan off the hook without saying anything more, noting that he has respect for sideline reporters. Harlan made clear that he doesn’t blame sideline reporters, then said flatly that the sideline-interview set-up needs to be re-worked.

They’re doing the job, and they’re asking the right questions because those questions are asked in the follow-up press conferences. But during the game, when you’ve got 30 seconds to shove it in? The coach doesn’t look good, I think it’s a bump in the road that can be avoided, and I think there’s a better way to go about it. I don’t know what it is.

The coaches do not like it. Not one of them. They all detest it. They’re just not as cranky about it as Pop is.

Harlan is right that coaches seem to range from downright rude to simply droll and uninteresting during their sideline chats with TV reporters. But in theory, there should be some value to viewers in hearing from coaches during games. Maybe coaches should be interviewed after the halftime break instead of before, so they’ve had some time to decompress? Or maybe we should hear from the coach only when there’s a particularly relevant storyline like an injury or a big comeback?

But as it currently stands, if coaches hate the interviews, reporters dread them and viewers tune them out, what’s the point?