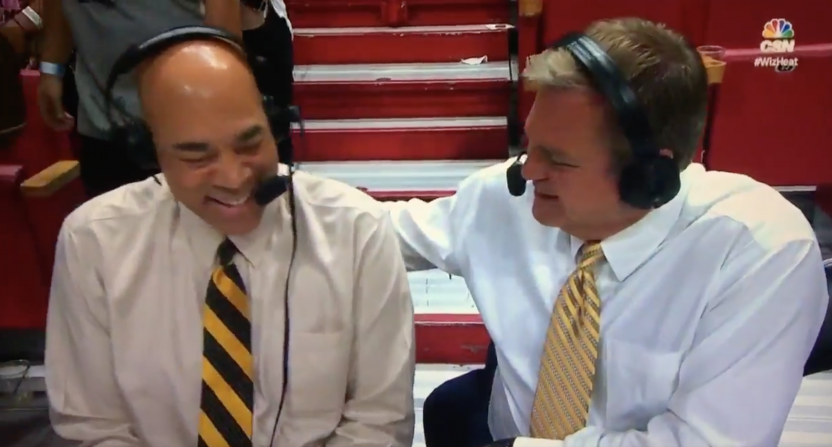 After 33 years as color commentator for the Bullets and Wizards, Phil Chenier is leaving the role, and his longtime CSN partner Steve Buckhantz is not ready for it.

Wednesday was Washington’s last regular season game of the year, and when it ended, Buckhantz delivered a tearful good-bye to the only primary game analyst in franchise history.

“Buddy, I gotta tell you something. I love you like a brother, a best friend, and I’m going to miss you, like a lot of people on the game broadcast. You’ll be here,” he said, pointing to his heart.

Steve Buckhantz getting choked up while saying goodbye to Phil Chenier pic.twitter.com/6qaX9qx4SK

Here’s a longer clip of the goodbye from Buckhantz to Chenier, in which the play-by-play man says it has been “an honor to have been with you for the last 20 years and develop not just partnership but a very, very close friendship.”

Final reg season #Wizards game… they will call the first round of the playoffs but Buck with tearful goodbye tonight pic.twitter.com/TbGUFeYS9H

Chenier and Buckhantz will call the first round of the playoffs together, but Buckhantz probably didn’t want to have to deliver an emotional good-bye after a decisive playoff game, so he got it out of the way early.

According to the Washington Post, Chenier was forced out of his game analyst role by CSN executives who wanted a fresh voice. Next year, he’ll do studio work and the occasional game broadcast for CSN, while also working for Monumental Sports & Entertainment.

Wizards fans seem almost universally distraught about Chenier leaving the analyst chair, and obviously his broadcast partner feels the same way. There’s no word yet on who will serve as the team’s primary color commentator in 2017-18.