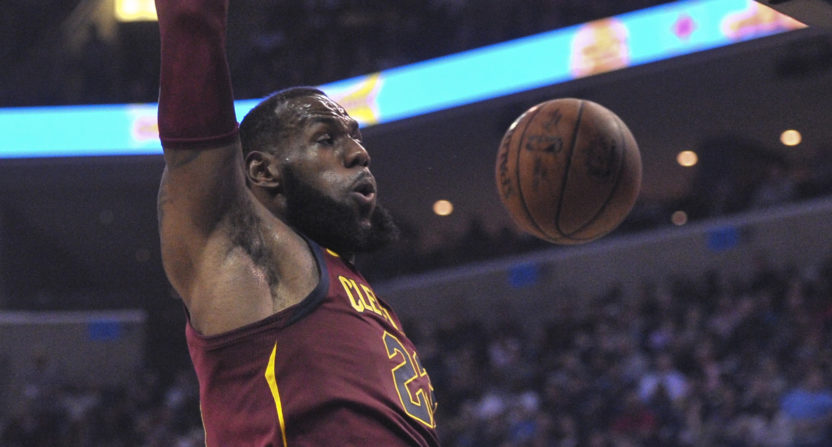 The final full month of the regular season kicked off on a very strong note Thursday, with LeBron James and Cleveland falling at home to Philadelphia, a team and a city very much being speculated about as a destination that would be fit for The King when he hits unrestricted free agency this summer.

But that game isn’t good enough to make our top 10 this month, even with the NCAA and NIT Tournaments throwing TNT and ESPN’s primetime schedules off a little bit in the middle of the month. We managed to sneak 14 teams into this month’s matchups, beginning with a potential NBA Finals preview.

The Rockets remain the story of the NBA, on a 14-game winning streak, on pace to be the most efficient offensive team in league history, and James Harden is just disrespecting people now. As long as they stay healthy, they’ll be Golden State’s biggest intra-conference foe since its Finals run began.

On the other side are the Celtics, the league’s best defensive team and one of just two teams (San Antonio being the other) to allow fewer than 100 points a game. If Houston can be stopped, Boston might be the only ones that can do it.

Both these teams are brimming with young athletic players, highlighted by Giannis Antetokounmpo for the Bucks and Joel Embiid and Ben Simmons for the Sixers. Philly is two games, and Milwaukee is 2 1/2 behind Washington for 4th in the East, which would mean home court in the first round of the playoffs.

Just 3 1/2 games separate 3rd from 9th in the West right now, with the Thunder precariously in the 7th seed. And unlike conference heavyweights Houston and Golden State, Oklahoma City hasn’t been excelling from the 3-point line.

The Thunder give up 11.1 made threes per game, in the bottom third, and make just 35 percent of their own triple tries, the 5th worst mark in the NBA. While Paul George has been phenomenal, nailing 42.1 percent on 7.7 attempts per game, Russell Westbrook has hit an abysmal 28.5 percent of his threes, on 4.4 attempts per contest.

The hottest team in the league aside from the Rockets are the Pelicans, winners of seven straight and just half a game behind the mighty Spurs for 4th in the West. NOLA has surged behind an other-worldly February from Anthony Davis, who averaged 35 points, 13 rebounds and 2.2 blocks last month, including a 53-18-5 line in a win over Phoenix on Monday.

The Clippers are unexpectedly hanging around the West playoff race as well, led by Tobias Harris, one of the players acquired from Detroit in the Blake Griffin trade. Avert your eyes Pistons fans, but Harris has been outplaying Griffin since the blockbuster deal went down.

The Wolves are 25-8 at home at the Target Center this season, just behind Houston for the best mark in the West. They get a big test against the Warriors in this Selection Sunday showdown, who amazingly have the same record, 24-7, both home and away.

Minnesota will have a tough time keeping up with Kevin Durant, who shot 60.6 percent from the field in 11 February games, averaging 27.6 points (5th in the NBA) during that span.

The hype will be gigantic for this game. Los Angeles’ desire to sign LeBron James this summer has been the league’s worst-kept secret. And the game gets a ton of added spice from the deadline day trade that sent Isaiah Thomas, whose tenure with Cleveland was a disaster, to the Lakers with Jordan Clarkson and Larry Nance going to the Cavs.

Will the actual basketball game be great? Probably not. But the takes will be hotter than Sean Miller’s seat right now.

The second of their two matchups this month, this one could include all-world Spurs forward Kawhi Leonard. Just days after the team all but ruled Leonard out for the season with a nagging right quad injury, he could now return within a week or two.

That would be monstrous news for San Antonio, who were feebly powerless to stop the Warriors without Leonard in last year’s Western Conference Finals. If Kawhi is back to reclaim his throne as the NBA’s best defender, that would add a lot of juice to a possible second round playoff matchup between these teams.

You may not know this, but the Raptors have the best record in the East at 43-17. They’re enjoying by far their best regular season in team history, but they’re not being taken very seriously due to their poor playoff performances.

Swept by the Cavs in last year’s East semifinals, it’s Cleveland that’s faced regular season adversity this year with Toronto as the on-paper favorites. This will be the first of two remaining regular season meeting between the two teams in Cleveland, a matchup we could very well see again in May.

It will be the first meeting between these teams since the Cavs sent Dwyane Wade back to the Heat, and the buzz surrounding that will be intense. On the court, Miami is just 3-4 since that trade and have sunk to 8th in the East. With 21 games remaining, the Heat hold a 2 1/2 game lead over Detroit for the conference’s final playoff berth.

While most of the basketball watching world will be focused on the Final Four in San Antonio, the top two teams in the East will play the first of two games in a five-day span. The Celtics’ top defense will be put to the test by the Kyle Lowry-DeMar DeRozan backcourt in a tremendous way to end the NBA month. LeBron’s greatness aside, it wouldn’t be a shock to see these two teams in the Eastern Conference Finals.