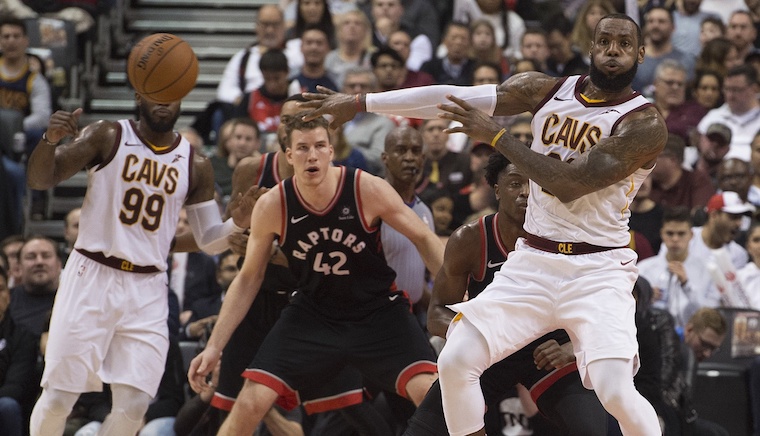 Exactly 10 days remain in the NBA regular season – really, it’s nine because there are no scheduled games on Monday for the college national championship game — and there are plenty of must-watch games as the playoff spots get sealed up and important seeding battles get sorted out.

All eight spots are basically clinched in the East, with Miami and Milwaukee four games ahead of ninth-place Detroit with five games to play. But matchups and home court are all over the place in the East, which we’ll get to as this column progresses.

The West playoff race is even more crazy. Just four games separate fourth through 10th in the conference right now, leading to an insanely high number of possibilities on which matchups we’ll see when the postseason begins on April 14.

Cleveland has really rounded into form of late, winning eight of its last nine, including a victory over the East-leading Raptors on March 21. The Cavs currently lead Philadelphia by a half game for third in the East, and are just a game ahead of Indiana, which is in fifth. Cleveland playing Game 1 on the road in the first round is still very much in play.

Toronto is having its best year in franchise history, and leads Boston by two games for the top seed in the conference. The Raptors were eliminated by the Cavs in each of the last two postseasons and still have everything to prove and so many still skeptical that the team can parlay its regular season success into a deep playoff run.

The Warriors are locked into the second seed in the West, so they can technically rest their players and get them ready for the first round. That first round will not be played with Stephen Curry in the lineup, who will be out with a sprained MCL. Golden State is just 14-11 when Curry hasn’t played this season, and its first- or second-round opponent could end up being Oklahoma City.

OKC is currently in fifth in the West with four games to play, a half-game back of San Antonio for fourth, a half-game ahead of sixth-place Utah and only 2.5 games clear of ninth-place Denver. So a lot can happen for the Thunder over the next 10 days, and taking care of business against a Warriors team with virtually nothing to play for is key.

While the Celtics actually have a better road record than home record this season, the Raptors are just 24-14 away from the Air Canada Centre, meaning home court is especially important to Kyle Lowry, DeMar DeRozan and company. A Boston win would give them a 3-1 regular season series win and the all-important tiebreaker.

With four games left, the Timberwolves have a tenuous hold on the seventh seed as they look to make the playoffs for the first time since the 2003-04 season. While Minnesota is 1.5 games behind San Antonio for fourth in the West, it leads ninth-place Denver by just 1.5 games as well.

Denver needed a miraculous comeback just to stay in ninth, beating Milwaukee in overtime on Sunday despite trailing by eight points in the final minute. Two of the Nuggets’ five remaining games are against the Wolves, including the regular season finale, and one is against the 10th place Los Angeles Clippers. For Denver to make the playoffs for the first time in five years, it’ll have earned it against a very tough schedule that also includes contests against Indiana and Portland.

The Sixers are playing some of the best basketball in the league right now. They’ve won 10 in a row — the last two without Joel Embiid, who’s out after suffering an orbital fracture on Wednesday — and are 21-5 since starting 25-25 and have clinched a playoff spot. Now that getting to the postseason is out of the way, Philly is looking for more.

With rumors of LeBron James potentially considering the Sixers in free agency this summer continuing to persist, the possibility of a Cavs-Sixers first-round matchup sounds delightfully delicious. With games against Brooklyn, Detroit, Dallas and Atlanta still remaining, a win over Cleveland on Friday means that the Sixers could easily finish third in the East – ahead of LeBron’s Cavs.

The second of the Thunder’s four remaining games couldn’t be tougher, against the West’s top seed with the best record and home record in the league. At 62-15, the Rockets have clinched home court throughout the playoffs and look to improve on their 39-9 record against the fearsome Western Conference.

And while Oklahoma City looks to seal up a playoff spot — its other two remaining games are against Miami and Memphis — Russell Westbrook will look to make history. Westbrook needs to grab 12 rebounds per game the rest of the way to average a triple-double for the second straight season. But more importantly, OKC needs to avoid a collapse down the stretch and get in the postseason.

With DeMarcus Cousins lost for the season with a torn ACL, Anthony Davis has been playing incredibly just to keep the Pelicans in the final playoff spot out west. New Orleans is one game ahead of Denver and two clear of the Clippers with four games remaining.

After games against Memphis and Phoenix, the Pels play at Golden State, at the Clippers and home to San Antonio. For NOLA to reach the postseason for just the second time in Davis’ career, they’ll have done it despite a very hard last three games.

The fact that these Clippers are even sniffing the playoff race is incredible, after trading Chris Paul last June, enduring so many key injuries and trading Blake Griffin in January. The Clips are two out with five to play, with four of those five— including games against the Spurs and Nuggets— at home. L.A. has to win four of five of these games, but even having gotten this far is an accomplishment.

These two teams really, really dislike each other. Whether it’s wearing black during their playoff series last year to signify a funeral to an epic Game 7 in the Eastern Conference semis last year, it’s an event whenever the Celtics and Wizards cross paths.

Washington is currently sixth in the East, but is just one game up on Milwaukee and Miami for seventh and eighth, respectively. A Boston win here could potentially send the Wizards into seventh, and a first-round head-to-head date with their east coast rivals.

The final night of the regular season begins with a matchup between the East’s two most exciting young teams. This game will almost definitely just be for seeding, and the Bucks will have an interesting decision on their hands. Finish eighth, and a re-match of last year’s first-round series with Toronto finally lurks. Finish seventh, and the stingy Celtics await. Finishing sixth could mean going up against the Cavs, or potentially these playoff-untested Sixers.

A lot of this will be determined over the next week, but there will be vital implications in this game regardless.

If the playoffs began Monday night, this would be a really interesting first-round matchup between two of the West’s best defensive teams. Damian Lillard has really elevated his game over the second half of the season, but facing a Jazz team that’s 24-5 over their last 29 would be super-intriguing.

With five games to play, Portland is three games ahead of San Antonio for third, so the Blazers are pretty locked in. Who Portland will play is a mystery. If Utah can win both its remaining games against the Lakers, it’ll be in good position to not only make the playoffs, but possibly challenge the Spurs for fourth and a home series in the first round.